Yisrael Meir (Kagan) Poupko (Dziatłava, 1838 - Radun', 1933), known popularly as The Chofetz Chaim, was an influential Eastern European rabbi, Halakhist, posek, and ethicist whose works continue to be widely influential in Jewish life. His surname, Poupko, is not widely known.[1]

Rabbi Kagan was born in Zhetl, Hrodno Guberniya, today's Belarus, on February 6, 1838, and died in Radun', Wilno Voivodship, Poland (pop. 250), today's Belarus, on September 15, 1933. When Kagan was ten years old, his father died. His mother moved the family to Vilnius in order to continue her son's education. While in Vilnius, Kagan became a student of Rabbi Jacob Barit. Kagan's mother later re-married (Poupko) and moved to Raduń. At 17, he married the daughter of his stepfather, and settled in Raduń.

He served as the town rabbi of Raduń for a short period. He then resigned from this position to establish the yeshiva in Raduń, which eventually became world famous. By all accounts he was a modest and humble man. For a while he had a shop selling household provisions, which his wife managed.[2] However, the business was not successful and he turned to teaching in order to support himself and his family. From 1864 to 1869 he taught Talmud in Minsk and Washilishok.[3]

In 1869, he formed a Yeshiva in Radun. The Yeshiva was a success and grew to prominence, later becoming known as "Yeshivas Chofetz Chaim of Raduń." In addition to spreading Torah through his yeshiva, the Chofetz Chaim was very active in Jewish causes. He traveled extensively to encourage the keeping of the Mitzvot amongst Jews. He became one of the most influential rabbis within Orthodox Judaism during the late 19th and early 20th century, taking a central leadership role in the World Agudath Israel movement in Eastern Europe.

Many other Jewish religious institutions throughout the world also bear his name. One American yeshiva named in his honor is the Yeshivas Rabbeinu Yisrael Meir HaKohen centered in Queens, New York, with several branches in the United States and Israel. The Chofetz Chaim's teachings have inspired some English-speaking American Jews to establish the Chofetz Chaim Heritage Foundation, dedicated to the dissemination of his teachings to Jewish communities around the world. An Orthodox kibbutz in Israel was named in his honor. 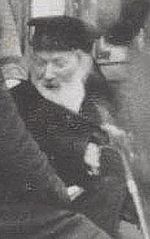 A photo of Rabbi Yisrael Meir Kagan in his old age