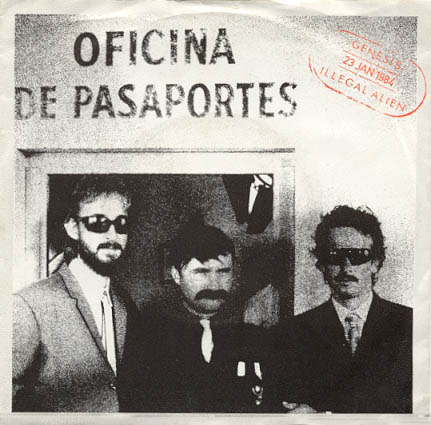 "Illegal Alien" is the fifth track in the 1983 album "Genesis" by Genesis.

The song's lyrics are a lighter, humorous depiction of the frustrations an faces, leading up to the chorus: "It's no fun/Being an illegal alien". Even though the lyrics are intended as a satire and to be taken in jest, the song can rarely be heard on United States radio stations because of its perceived offensiveness toward immigrants. In particular, the second stanza of the bridge — in which the immigrant suggestively offers sexual favours from his sister in exchange for admittance across the border — has been edited from radio versions of the song, as well as from the music video version.

Even though "Illegal Alien" isn't as popular as other Genesis songs, it still managed to make "Blender" magazine's list of the "50 Worst Songs Ever", charting at number 13. [http://www.blender.com/guide/articles.aspx?id=819] When Blender partnered with for the "100 Most Awesomely Bad Songs Ever" though, this song was notably absent.

The video uses imagery of the way Mexicans are stereotypically portrayed, with the participants (including Collins) shown drinking, sleeping, playing Mariachi music, wearing huge sombreros and serapes, and singing in mock-Mexican accents.

A live version is featured on Disc Two of , which was Recorded live at the L.A. Forum, on .