/ˈmɒnməθ/ mon-məth; Welsh: Trefynwy = "town on the Monnow") is a town in southeast Wales and traditional county town of the historic county of Monmouthshire. It is situated close to the border with England, where the River Monnow meets the River Wye with bridges over both.[1]

The name Monmouth is an English contraction of 'Monnow-mouth'. The Welsh name for the river, Mynwy, which may originally have meant "fast-flowing", was anglicised as Monnow. The town was originally known in Welsh as Abermynwy ("mouth of the Monnow"), replaced by Trefynwy ("Monnow town" - the initial m of Mynwy mutating in Welsh to f) by the 17th century.[2] The name is pronounced by those who live in the area as 'Mon-muth'; in most of Wales it is pronounced as 'Mun-muth'.[citation needed]

The medieval 13th century stone gated bridge at Monnow Bridge[3] is unique in Britain being the only preserved bridge of its design remaining. There is also a long bridge over the River Wye[4] rebuilt in 1617 and widened later. A feasibility study was made in 1999 by world-famous engineers Ove Arup and Partners (who led the engineering design of Sydney Opera House) for a new bridge further along from the Monnow bridge, but the scheme came to nothing and instead a more neutral bridge crossing was built, opening on March 15, 2004, thus allowing the old bridge to become pedestrianised.[5] This project has meant the demolition of the old cattle market.

Excavations undertaken by the Monmouth Archaeological Society on sites along Monnow Street have uncovered a wealth of information about the early history of the town. Indeed, the Council for British Archaeology have designated Monmouth as one of the top ten towns in Britain for archaeology.[6]

Monmouth as an organised settlement dates back to the times of the Roman occupation of Britain and the conquest of Wales. The Romans called it Blestium, and it was part of a network of Roman forts covering the region, linked via Roman roads to Abergavenny or Gobannium, Usk known as Burrium, later Isca Augusta at Caerleon and Glevum at Gloucester. Archaeologists and historians have found items of Roman pottery and Roman currency from that period.

The town appears in the Domesday Book, and for the 11th and 12th centuries the town and surrounding areas were ruled by Norman French lords after the conquest of England by William the Conqueror in 1066. During this time, Monmouth Castle[7] was built, in 1067 under William Fitz-Osbern of Breteuil, Normandy, a significant castle builder, holding commanding views over the surrounding area from a sound defensive site. Initially it would have been a motte and bailey castle, rebuilt in stone and later refortified and developed over time.

A Benedictine priory[8] was also created in 1101,[9] and it was traditionally there that Geoffrey of Monmouth - author of the Historia Regum Britanniae (History of the Kings of Britain) - gained his education. A fortified bridge[10] was built during the 13th century.

The Battle of Monmouth was fought in 1233 between the rebel forces of Richard Marshal, 3rd Earl of Pembroke, and a royalist force under John of Monmouth. The rebels carried the day and St Thomas' Church and Monnow Bridge were torched in the battle, which according to Glamorgan-Gwent Archaeological Trust records took place beside the River Monnow on Castle Field, land today known as Vauxhall Fields. The battle was immortalised by an illustration by 13th century historian Matthew Paris, which shows Richard Marshal unhorsing Baldwin of Guisnes. The original is owned by Corpus Christi College, Cambridge.

The castle came into the possession of the House of Lancaster through the marriage of John of Gaunt to Blanche, a Monmouth based heiress. John of Gaunt strengthened the castle, adding the Great Hall.

In 1387, Henry V was born in Monmouth Castle in the Queen's Chamber within the gatehouse. The castle became a favourite residence of the House of Lancaster. Henry would win the Battle of Agincourt in 1415. Many parts of Monmouth, including the town's main square, are named after this battle.

During the rebellion of Owain Glyndwr between 1400 and 1412 Monmouth Castle and walled town was not attacked by Welsh forces, however skirmishes and battles were fought in the area, such as at Battle of Campston Hill when Prince Henry's men followed a retreating force of Glyndwr's, capturing the Welsh standard and killing the standard bearer, Ellis ap Richard ap Howell ap Morgan Llwyd. Other battles took place at nearby at Craig-y-Dorth, at Grosmont and Usk, such as the Battle of Pwll Melyn. Grosmont town was razed and Abergavenny and Crickhowell attacked. 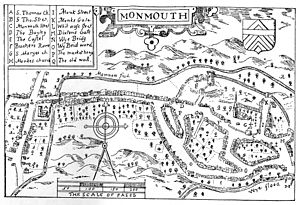 1610 Map of Monmouth by John Speed

In 1605, James I granted Monmouth a town charter by letters patent. The granting of the charter included the charge that the town "at all perpetual future times ... be and remain a town and borough of Peace and Quiet, to the example and terror of the wicked and reward of the good".[11]

The layout of the town as depicted in Speede's map of 1610 would be easily recognisable to present day inhabitants, with the layout of the main axis from the castle via the main street, Monnow Street, to the bridge clearly visible. Monnow Street is a typical market street, in being wide in the middle (for those selling) and narrow at each end (to help prevent the livestock escaping).

In 1840 at Monmouth's Shire Hall, Chartist protestors John Frost, Zephaniah Williams and William Jones became the last men in Britain to be sentenced to be hanged, drawn and quartered after being found guilty of treason following riots in Newport that led to 20 deaths. The sentences were later commuted to transportation to Australia.[12]

Four railways were built to serve Monmouth between 1857 and 1883; the Coleford, Monmouth, Usk and Pontypool Railway, the Ross and Monmouth Railway, the Wye Valley Railway, and the Coleford Railway. All of these closed between 1917 and 1964, since when Monmouth has been without rail services.[13] One of the former lines has now been replaced by a major road, built along the same route. Monmouth's main railway station, known as Monmouth Troy, was a coal distribution depot and a base for heavy goods vehicles for many years after its closure as a part of the rail network, but the building has now been dismantled and re-erected at Winchcombe railway station on the Gloucestershire Warwickshire Railway.[14] The other station at Monmouth was Monmouth May Hill on the Ross and Monmouth Railway, built on the opposite bank of the River Wye to the town centre. This operated for many years as Monmouth Sawmills and Gas Works after its closure as part of the rail network.

Apart from Monmouth Comprehensive School,[15] with over 1,600 pupils, there are two independent schools - Monmouth School[16] (founded 1614) and Haberdashers' Monmouth School for Girls[17] (founded 1892). Secondary students wishing to learn through the medium of Welsh are bused to Ysgol Gyfun Gwynllyw in Pontypool. There are several state primary schools, with most areas served by both infants' and juniors' schools. Welsh medium primary education for the town is provided by Ysgol Gymraeg Y Fenni. There is a Welsh-language parent-and-toddler group - "Cylchoedd Ti a Fi" Trefynwy - which operates under the umbrella of Mudiad Ysgolion Meithrin. Coleg Gwent offers short course at their "Learn IT Centre."

The annual Monmouth Show has been held each year (traditionally on the last Thursday of August) since 1919 (when it was called the Monmouthshire County Show), though its history can be traced to 30 May 1857 when the 8th Duke of Beaufort and Sir Charles Morgan M.P. put up the funds for a Monmouth Cattle Show. Prior to that there had been an agricultural society in the town dating back to the 1790s, which held ploughing competitions.

Every year is also the well known, Monmouth Music Festival and the St David's Foundation raft race. A regular market takes place at the bottom of town.

Monmouth is a market town located at the confluence of three rivers – the Trothy, Monnow and (more famously) the river Wye. The town overlooks the hills of Abergavenny, Hay Bluff and the Brecon Beacons. It is in close proximity of the Royal Forest of Dean and Wye Valley.

Tourist attractions include the Monmouth Castle, the free entry Nelson museum and Shire Hall - a visitors centre and tourist office. The Savoy Theatre on Church Street, built on the site of the oldest such building in Wales,[18] functions as both a cinema and theatre. The Blake Theatre is home to a variety of concerts and dramatic productions. Monnow Bridge can be seen looking down through the town. The buildings and their designs along the high street are very varied, depicting development throughout the eras.

The town has many independent cafes and restaurants. The high street has a mixture of shops including well known high street names. Church Street, also known as Monmouth Old Town is a cobbled street offering many services and is home to the locally renowned[citation needed] fruit seller, Munday & Jones. Notable is the amount of Supermarkets; Cooperative Food, Marks & Spencer Food, Waitrose, Iceland Foods, Lidl and soon[when?] to be One Stop. Banks also feature heavily in the town with nearly every major bank having business there. Presently, it is the only town within the region not to have some form of nightclub or predominant music venue.

There are numerous public houses in the centre of Monmouth, including the Old Nags Head, the Queen's Head, the Punch House, the Griffin, the Gloucester, the Vinetree, the King's Head (Wetherspoon), the Three Horseshoes, the Green Dragon and the Gatehouse. 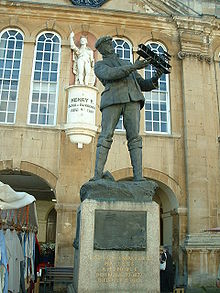 Statues of Charles Rolls (foreground) and Henry V of England (elevated behind) in Monmouth.

People associated with Monmouth include: