A League of Their Own

A League of Their Own

Infobox Film
name = A League of Their Own 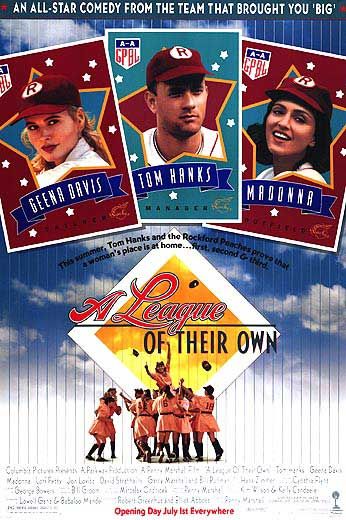 "A League of Their Own" is a 1992 that tells a fictionalized account of the real-life (AAGPBL). Directed by , the film stars , , Madonna, and . The screenplay was written by and from a story by Wilson and Kelly Candaele.

When threatens to shut down , candy manufacturing magnate Walter Harvey () decides to create a women's league to make money. Ira Lowenstein () is put in charge of public relations and scout Ernie Capadino () is sent out to recruit players.

Capadino likes what he sees in catcher Dottie Hinson (). She's a terrific hitter and, almost as important, "a doll" and likely to attract male fans. He offers her a tryout, but the married woman is content where she is, working in a dairy and on the family farm in while her husband is away at war. He's less impressed with her younger sister, pitcher Kit Keller (), who loves the game passionately but appears to be less talented. He finally lets her come along when she persuades Dottie to give it a try and Dottie refuses to go alone. Along the way to the tryouts in Chicago, he also checks out Marla Hooch (), a great switch-hitting slugger from . However, Capadino has been told to find women who are as pretty as they play. The blunt-speaking scout finds her too unattractive and rejects her. Dottie and Kit refuse to continue on without her and Ernie reluctantly gives in.

When the trio arrive at the tryouts in Chicago, they meet Doris Murphy () and Mae Mordabito (Madonna), two tough-talking Brooklynites. They are all assigned with 10 others to form the ; 45 other prospects are assigned to either the , , or . The Peaches are managed by drunken former baseball great Jimmy Dugan (). Jimmy initially treats the whole thing as a joke, leaving the managerial duties to Dottie. However, he takes over when the Peaches establish themselves as the class of the league. Meanwhile, the players have to attend mandatory classes to maintain a "lady like" image, which they consider a ridiculous and condescending waste of time. Their uniform is a short (by 1940s standards) dress. After they initially think it will make it difficult to slide into bases, they conjure up the phrase "dirt in the skirt!"

The league attracts little interest at first. In one memorable scene, Lowenstein tells the Peaches that things aren't going so well and that the owners are having second thoughts about keeping the league going beyond the 1943 season. With a "Life" magazine photographer in attendance, he asks them to do something spectacular. Dottie obliges: when a ball is popped up behind home plate, she catches it while doing splits; the resulting photograph makes the cover of the magazine. Jimmy is (predictably) disgusted, while the opposing manager and catcher are stunned. More and more people gradually show up and the league becomes a success.

The between Dottie and Kit becomes more intense as the season progresses: Kit has a massive because Dottie is a better player, a better hitter, and more conventionally beautiful. After Kit gets upset when Dottie has Jimmy pull her for a relief pitcher, Dottie offers to have herself traded to Racine to prevent the conflict between her and her sister from interfering with the game. Lowenstein, who had been publicizing the photogenic Dottie as the "Queen of Diamonds", has Kit traded to Racine instead. Kit blames her sister for getting her traded.

The two meet again in the championship game of the AAGPBL World Series. In the top of the ninth inning, Kit pitches to Dottie and Dottie hits a line drive over her head, scoring two runs for Rockford. Kit comes up to bat with her team trailing in the bottom of the inning. Although Dottie gives the pitcher advice on Kit's weaknesses as a hitter, Kit hits the ball into the outfield and rounds the bases, ignoring a stop signal from the third base coach. Dottie catches the ball and blocks home plate but Kit runs into her hard. Dottie drops the ball and Kit scores the winning run. Dottie quits baseball to be with her husband Bob (), who has returned from the war, but she and Kit reconcile before she leaves.

Many years later, the two sisters, who haven't seen each other in quite a while, and many of their Peaches teammates (except for Dugan and Evelyn Gardner who had died some years earlier) are reunited at the opening of a women's section in the . Many of the older women shown in the final scenes had been actual players of the AAGPBL.

League Stadium, located in , served as the homefield for the . Many other game scenes were filmed at in . [cite web| title=A League of Their Own| publisher=The Internet Movie Database| url=http://www.imdb.com/title/tt0104694/|accessdate=2008-10-02] It is the nation's third oldest ball park (and the oldest minor league ball park), and was depicted as the home of the Racine Belles. The scenes that take place in fictional Harvey Field were shot at in . As with his film counterpart, owner P.K. Wrigley was the original sponsor of the league.

The Soaper-Esser house (built 1884-87) in which the women lived is located at 612 North Main Street in Henderson, Kentucky, and is on the historic register. The roadhouse scenes were filmed at the Hornville Tavern (2607 Baseline Rd.) in Evansville, Indiana.

All scenes on the train and at the train stations were filmed at the Illinois Railway Museum in Union, Illinois. The Nebraska Zephyr, now part of the museum's collection, was prominently featured.

The movie was released on , , and was #1 by its second weekend (July 10-12). [cite web| title=A League of Their Own (1992)| publisher=Box Office Mojo| url=http://www.boxofficemojo.com/movies/?page=weekend&id=leagueoftheirown.htm| accessdate=2008-10-02] It was a commercial success, making $107 million in the United States on a $40 million budget (and an additional $25 million worldwide), and was well-received by critics.The Jimmy Dugan exclamation, "Are you crying? There's no crying! There's no crying in baseball!" when his tirade against Evelyn Gardner for making a costly playing error makes her break out in tears, was rated 54th on the 's list of the greatest film quotes of all time.