Charles Gavan "Chubby" Power, MC, PC (18 January 1888 – 30 May 1968) was a Canadian politician and athlete. Power's father, William Power, was also a Member of Parliament from Quebec, retiring in 1917. He had three brothers James, Joe who were also athletes and William Gerard Power who became a member of the Legislative Council of Quebec.

Born in Sillery, Quebec, Power played ice hockey while studying law. From 1906, he played for the Quebec Bulldogs of the Eastern Canada Amateur Hockey Association (ECAHA). A proficient scorer, he scored four goals in one game in 1908 and five goals in a game in 1909.

He entered politics in the 1917 federal election, after having been wounded during the Battle of the Somme. He was awarded the Military Cross for gallantry during military operations. He was elected as a "Laurier Liberal" during the Conscription Crisis of 1917.

In 1935, Power was appointed minister of pensions and health in the Liberal cabinet of William Lyon Mackenzie King. 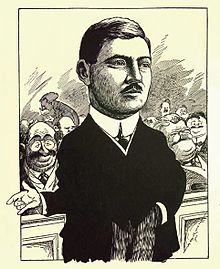 Charles Gavan Power from Canadian men of affairs in cartoon (1922)

During World War II, he served as minister of national defence for air, and was responsible for expanding the Royal Canadian Air Force. His opposition to conscription led him to resign from Cabinet during the Conscription Crisis of 1944 after the government passed an Order in Council to send conscripts overseas. Power sat as an "Independent Liberal" for the duration of the war and was re-elected as an Independent Liberal in the 1945 federal election. He subsequently rejoined the party and ran to succeed King in the 1948 Liberal leadership convention, but came a poor third.