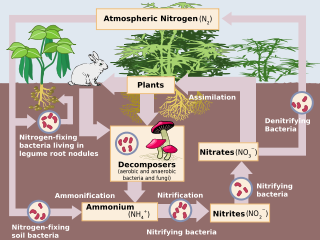 Denitrification is a microbially facilitated process of nitrate reduction that may ultimately produce molecular nitrogen (N2) through a series of intermediate gaseous nitrogen oxide products.

This respiratory process reduces oxidized forms of nitrogen in response to the oxidation of an electron donor such as organic matter. The preferred nitrogen electron acceptors in order of most to least thermodynamically favorable include nitrate (NO3−), nitrite (NO2−), nitric oxide (NO), and nitrous oxide (N2O). In terms of the general nitrogen cycle, denitrification completes the cycle by returning N2 to the atmosphere.

The process is performed primarily by heterotrophic bacteria (such as Paracoccus denitrificans and various pseudomonads),[1] although autotrophic denitrifiers have also been identified (e.g., Thiobacillus denitrificans).[2] Denitrifiers are represented in all main phylogenetic groups.[3] Generally several species of bacteria are involved in the complete reduction of nitrate to molecular nitrogen, and more than one enzymatic pathway have been identified in the reduction process.[4]

Direct reduction from nitrate to ammonium, a process known as dissimilatory nitrate reduction to ammonium or DNRA,[5] is also possible for organisms that have the nrf-gene.[6] This is less common than denitrification in most ecosystems as a means of nitrate reduction. Other genes known in microorganisms which denitrify include nir (nitrite reductase) and nos (nitrous oxide reductase) among others;[7] organisms identified as having these genes include Alcaligenes faecalis, Alcaligenes xylosoxidans, many in the Pseudomonas genus, Bradyrhizobium japonicum, and Blastobacter denitrificans.[8]

All organisms require certain nutrients in their surroundings (available to them) for survival.[9] Depending upon the ecosystem, nitrogen is most likely the limiting nutrient, although phosphorus is the other primary limiting nutrient and these two elements interact chemically.[10] Some organisms appear to be able to denitrify and remove phosphorus.[11] The triple bond of N2 makes this a very stable compound; most organisms (i.e. plants) depend upon others to break this down to make it available for biochemical reactions.[12] See Nitrification. Symbiotic relationships between Rhizobium species and legumes are well-documented.[13]

Denitrification takes place under special conditions in both terrestrial and marine ecosystems.[14] In general, it occurs where oxygen, a more energetically favourable electron acceptor, is depleted, and bacteria respire nitrate as a substitute terminal electron acceptor. Due to the high concentration of oxygen in our atmosphere denitrification only takes place in anaerobic environments where oxygen consumption exceeds the oxygen supply and where sufficient quantities of nitrate are present. These environments may include certain soils[15] and groundwater,[16] wetlands, oil reservoirs,[17] poorly ventilated corners of the ocean, and in seafloor sediments.

Denitrification generally proceeds through some combination of the following intermediate forms:

The complete denitrification process can be expressed as a redox reaction:

This reaction shows a fractionation in isotope composition. Lighter isotopes of nitrogen are preferred in the reaction, leaving the heavier nitrogen isotopes in the residual matter. The process can cause delta-values of up to −40, where delta is a representation of the difference in isotopic composition. This can be used to identify denitrification processes in nature.

Rhizobia are soil bacteria with the unique ability to establish a N2-fixing symbiosis on legume roots. When faced with a shortage of oxygen some rhizobia species are able to switch from O2-respiration to using nitrates to support respiration. This denitrification pathway comprises the sequential reduction of nitrate or nitrite to dinitrogen, via the gaseous intermediates nitric oxide and nitrous oxide. The enzymes involved in denitrification are nitrate-, nitrite-, nitric oxide- and nitrous oxide reductase, encoded by nar/nap, nir, nor and nos genes, respectively. In recent years it has emerged that many rhizobia species have genes for enzymes of some or all of the four reductase reactions for denitrification. In fact, denitrification can be readily observed in many rhizobia species, in their free-living form, in legume root nodules, or in isolated bacteroids.[18]

Deliberate use of process

Denitrification is commonly used to remove nitrogen from sewage and municipal wastewater. It is also an instrumental process in wetlands[19] and riparian zones[20] for the removal of excess nitrate from groundwater resulting from excessive agricultural or residential fertilizer usage.[21]

In some wastewater treatment plants, small amounts of methanol, ethanol, acetate or proprietary products like MicroCg or MicroCglycerin are added to the wastewater to provide a carbon source for the denitrification bacteria.[23] Denitrification processes are also used in the treatment of industrial wastes.[24]

Increasing carbon dioxide levels within the atmosphere will influence global nutrient cycling, yet it is difficult to predict what those interactions might be.[25] Chemical interactions between soils and the atmosphere will be influenced by changes in atmospheric composition.[26] There are indications that increased fertilization of soils with nitrogen causes a decrease in carbon sequestration.[27]

Jake Beaulieu, a postdoctoral researcher the Environmental Protection Agency in Cincinnati, Ohio and Jennifer Tank, Galla Professor of Biological Sciences at the University of Notre Dame, are lead authors of new paper demonstrating that streams and rivers receiving nitrogen inputs from urban and agricultural land uses are a significant source of nitrous oxide to the atmosphere.[28]