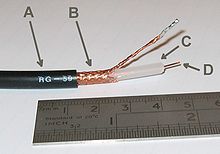 In geometry, coaxial means that two or more forms share a common axis; it is the three-dimensional linear analogue of concentric.

Coaxial cable, as a common example, has a wire conductor in the centre (D) a circumferential outer conductor (B) and an insulating medium called the dielectric (C) separating these two conductors. The outer conductor is usually sheathed in a protective PVC outer jacket (A).

The dimension and material of the conductors and insulation determine the cables characteristic impedance and attenuation at various frequencies.

In loudspeaker design, coaxial speakers are a loudspeaker system in which the individual driver units radiate sound from the same point or axis.