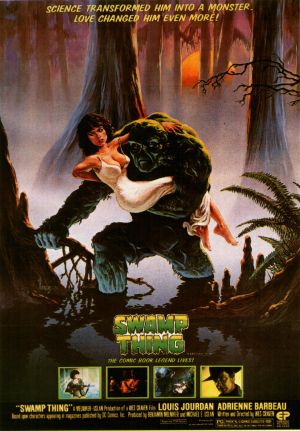 "Swamp Thing" is a 1982 horror film written and directed by . It starred , and as the scientist who was transformed into a monster () by a laboratory accident. The film was based on the character of the same name by and . A latecoming, low-budget sequel entitled "" appeared in 1989.

Author notes that "Swamp Thing" differs in many respects from Craven's usual work. Intending to show the major Hollywood studios that he could handle action, stunts and major stars, [Muir, John Kenneth (1998). "Swamp Thing (1982)" in "Wes Craven: The Art of Horror". Jefferson, North Carolina: McFarland & Co. ISBN 0-7864-0576-7. p.95.] Craven substituted his usual focus on the problems of the family and society for pure entertainment. [Muir (1998). p. 90.] Nevertheless, Muir points out, some of Craven's usual themes and images do appear in "Swamp Thing". For example, as in "" (1972), and "The Hills Have Eyes" (1977), Craven shows a close connection between the landscape and his characters. [Muir (1998). p. 91.] Filming occurred primarily on location in Charleston, South Carolina, and nearby , .

There are two cuts of the film in circulation. A European cut, and a United States cut. The European cut included a topless bathing scene with Adrienne Barbeau and later on in the film one of the Arcane henchmen is seen galavanting with some topless women. MGM, the company that released the film on DVD, marketed the disc erroneously. The initial Region 1 release was actually the Euro cut, but had a PG rating. The film was later recalled when a mother rented the film for her son and saw the nudity, thus prompting her to complain to MGM. The PG-rated U.S. cut is now the only version of the film currently available in U.S. retail stores.