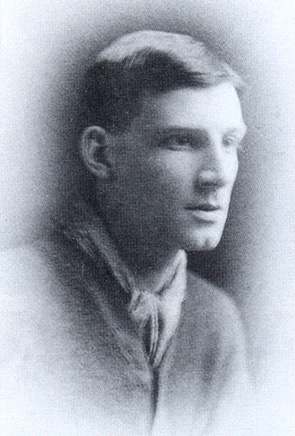 Siegfried Loraine Sassoon, CBE MC ( &ndash; ) was an English poet and . He became known as a writer of satirical anti-war verse during . He later won acclaim for his prose work.

Sassoon was born in a house named Weirleigh (which still stands) in the village of , , to a ish father and an Anglo-Catholic mother. His father, Alfred Ezra Sassoon (1867-1895) (son of ), came from the wealthy n Baghdadi Jewish Sassoon merchant family but was disinherited for marrying outside the faith. His mother, Theresa, belonged to the Thornycroft family, sculptors responsible for many of the best-known statues in &mdash;her brother was Sir . There was no German ancestry in Sassoon's family; he owed his unusual first name to his mother's predilection for the operas of Wagner. His middle name was taken from the surname of a clergyman with whom she was friendly.

Sassoon was educated at , Kent, in (at ), and at , (of which he was made an honorary fellow in 1953) where he studied both and from 1905 to 1907. However, he dropped out of university without a degree and spent the next few years hunting, playing cricket and privately publishing a few volumes of not very highly acclaimed poetry. His income was just enough to prevent his having to seek work, but not enough to live extravagantly. His first real success was "The Daffodil Murderer", a parody of "The Everlasting Mercy" by , published in 1913 under the of "Saul Kain".

Motivated by patriotism, Sassoon joined the just as the threat of was realised and was in service with the on the day the United Kingdom declared war (4 August 1914). He broke his arm badly in a riding accident and was put out of action before even leaving , spending the spring of 1915 convalescing. At around this time his younger brother Hamo was killed at (, whom Siegfried had briefly met, died on the way there); Hamo's death hit Siegfried very hard. In May of that year, he joined the as a commissioned officer and in November, he was sent to First Battalion in . He was thus brought into contact with and they became close friends. United by their poetic vocation, they often read and discussed one another's work. Though this did not have much perceptible influence on Graves's poetry, his views on what may be called 'gritty realism' profoundly affected Sassoon's concept of what constituted poetry. He soon became horrified by the realities of war, and the tone of his writing changed completely: where his early poems exhibit a Romantic dilettantish sweetness, his war poetry moves to an increasingly discordant music, intended to convey the ugly truths of the trenches to an audience hitherto lulled by patriotic . Details such as rotting corpses, mangled limbs, filth, cowardice and suicide are all trademarks of his work at this time, and this philosophy of 'no truth unfitting' had a significant effect on the movement towards poetry.

Sassoon's periods of duty on the Western Front were marked by exceptionally brave actions, including the single-handed capture of a German trench in the . He often went out on night-raids and bombing patrols and demonstrated ruthless efficiency as a company commander. Deepening depression at the horror and misery the soldiers were forced to endure produced in Sassoon a paradoxically manic courage, and he was nicknamed "Mad Jack" by his men for his near-suicidal exploits. Despite having been decorated for bravery, he decided in 1917 to make a stand against the conduct of the war. One of the reasons for his violent anti-war feeling was the death of his friend, (called "Dick Tiltwood" in the ). He would spend years trying to overcome his grief.

At the end of a spell of convalescent leave, Sassoon declined to return to duty; instead, encouraged by pacifist friends such as and , he sent a letter to his commanding officer titled , which was forwarded to the press and read out in Parliament by a sympathetic MP. Rather than Sassoon, the military authorities decided that he was unfit for service and sent him to near , where he was officially treated for (''). Before declining to return to service he threw the ribbon from his into the river ; however in May 2007 the medal itself turned up in an attic at the house in Mull where his son had lived. The medal has been bought by the for display at their museum in .

The "Regeneration", by , is a fictionalised account of this period in Sassoon's life, and was made into a film starring as , the psychiatrist responsible for Sassoon's treatment. Rivers became a kind of surrogate father to the troubled young man, and his sudden death in 1922 was a major blow to Sassoon.

At Craiglockhart, Sassoon met , another poet who would eventually exceed him in fame. It was thanks to Sassoon that Owen persevered in his ambition to write better poetry. A manuscript copy of Owen's "" containing Sassoon's handwritten amendments survives as testimony to the extent of his influence. To all intents and purposes, Sassoon became to Owen 'Keats and Christ and Elijah'; surviving documents demonstrate clearly the depth of Owen's love and admiration for him. Both men returned to active service in France, but Owen was killed in 1918. Sassoon, having spent some time out of danger in , eventually returned to the Front and was almost immediately wounded again--by , but this time in the head--and spent the remainder of the war in Britain. After the war, Sassoon was instrumental in bringing Owen's work to the attention of a wider audience. Their friendship is the subject of 's play, "".

The war had brought Sassoon into contact with men from less advantaged backgrounds, and he had developed sympathies. Having lived for a period at , where he spent more time visiting literary friends than studying, he dabbled briefly in the politics of the Labour movement, and in 1919 took up a post as literary editor of the socialist "". During his period at the "Herald", Sassoon was responsible for employing several eminent names as reviewers, including and , and commissioned original material from "names" like and . His artistic interests extended to music. While at Oxford he was introduced to the young , whose friend and patron he became. Walton later dedicated his "" overture to Sassoon in recognition of his financial assistance and moral support.

Sassoon later embarked on a lecture tour of the USA, as well as travelling in Europe and throughout Britain. He acquired a car, a gift from the publisher Frankie Schuster, and became renowned among his friends for his lack of driving skill, but this did not prevent him making full use of the mobility it gave him.

Meanwhile, he was beginning to practise his homosexuality more openly, embarking on an affair with the artist, , who had been introduced by mutual friends. During his US tour, he met a young actor who treated him callously. Nevertheless, he was adored by female audiences, including one at .

Sassoon was a great admirer of the Welsh poet, . On a visit to in 1923, he paid a pilgrimage to Vaughan's grave at , , and there wrote one of his best-known peacetime poems, "At the Grave of Henry Vaughan". The deaths of three of his closest friends, , and (the publisher), within a short space of time, came as another serious setback to his personal happiness.

At the same time, Sassoon was preparing to take a new direction. While in America, he had experimented with a . In 1928, he branched out into prose, with "", the anonymously-published first volume of a fictionalised , which was almost immediately accepted as a classic, bringing its author new fame as a humorous writer. The book won the 1928 James Tait Black Award for fiction. Sassoon followed it with "" (1930) and "Sherston's Progress" (1936). In later years, he revisited his youth and early manhood with three volumes of genuine autobiography, which were also widely acclaimed. These were "The Old Century", "The Weald of Youth" and "Siegfried's Journey".

Sassoon, having matured greatly as a result of his military service, continued to seek emotional fulfillment, which he at first attempted to find in a succession of love affairs with men, including the actor ; Novello's former lover, the actor ; German aristocrat ; the writer Beverley Nichols; and an effete aristocrat, the Hon. Stephen Tennant.

Separated from his wife in 1945, Sassoon lived in seclusion at Heytesbury in , although he maintained contact with a circle which included and . One of his closest friends was the young cricketer . He formed a close friendship with Vivien Hancock, headmistress of Greenways School at Ashton Gifford, which his son George attended. The relationship provoked Hester to make some strong accusations against Vivien Hancock, who responded with the threat of legal action. ["Siegfried Sassoon: The Journey from the Trenches" J M Wilson ] Towards the end of his long life, he was converted to , and was admitted to the faith at , close to his home. He also paid regular visits to the nuns at , and the abbey press printed commemorative editions of some of his poems.

He died seven days before his 81st birthday, and is buried at , , close to , a Roman Catholic priest and writer whom he admired.

On 11 November 1985, Sassoon was among sixteen Great War poets commemorated on a slate stone unveiled in 's [http://net.lib.byu.edu/english/wwi/poets/poets.html] . The inscription on the stone was written by friend and fellow War poet . It reads: "My subject is War, and the pity of War. The Poetry is in the pity." [http://net.lib.byu.edu/english/wwi/poets/Preface.html]

Siegfried Sassoon's only child, , died of cancer in 2006. George had three children, two of whom were killed in a car crash in 1996.