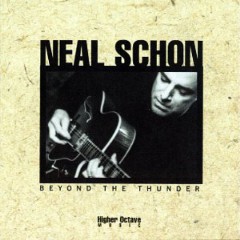 "Beyond the Thunder" is the second solo album by American released in 1995.

Between the time in the early-to-mid-90s that Neal Schon played in the band Hardline and later reformed Journey, he released this album mixing fusion, world music and acoustic rock influences. Schon collaborated with many old friends including Jonathan Cain and Steve Smith from Journey, and Santana percussionists Chepito Areas and Michael Carabello.

In the liner notes Schon recalls the background on some of the songs including "Send Me an Angel" which is about his wife Dina. The unique howl sound effects on "Call of the Wild" were created by Schon on guitar after listening to a tape Michael Carabello had recorded on a trip in . "Big Moon" contains Journey-esque melodies, as Cain and Schon used the original guitar from the Journey song "I'll Be Alright Without You" for the track's sound.

The track "Deep Forest" originated as an acoustic instrumental Schon would perform live in concert with Hardline. As he described "I had all these bits and pieces that I had played over the years that I just love. And so "Deep Forest" is a composed version of what I used to do when I was improvising on stage.". The viola parts of this arrangement were played on keyboard by Schon and according to Cain the first take of the song was used for the album.

As a footnote, the album's liner notes contained a to Journey's former lead singer Steve Perry when Schon commented "I think Steve Perry is going to like this record." The comment may have been a response to words in Perry's song "Anyway" from his 1994 album "", which recalled his time together with his "brothers" in Journey. Within one year, Schon and Perry would reunite Journey to release "Trial by Fire" in 1996.

* Liner notes from the album.