This article is about the plant genus. For other uses, see Arbutus (disambiguation).
"Madroño" redirects here. In tropical America, this can refer to the mangosteen Garcinia madruno, an unrelated eudicot.

Arbutus is a genus of at least 14 species of flowering plants in the family Ericaceae, native to warm temperate regions of the Mediterranean, western Europe, and North America.

Arbutus are small trees or shrubs with red flaking bark and edible red berries.[1] Fruit development is delayed for about five months after pollination, so that flowers appear while the previous year's fruit are ripening.[1]

North American members of the genus are called Madrones, from the Spanish name madroño (strawberry tree) although this terminology is not used in Canada. The European species are also called Strawberry Trees from the superficial resemblance of the fruit to a strawberry; some species are sometimes referred to simply as the "Arbutus". In the United States, the name "Madrone" is used south of the Siskiyou Mountains of southern Oregon/northern California and the name "Madrona" is used north of the Siskiyou Mountains according to the "Sunset Western Garden Book". In British Columbia, the trees are simply known by the name "Arbutus."[2][3] All refer to the same tree, Arbutus menziesii, native to the Pacific Northwest and Northern California regions. It is Canada's only native broadleaved evergreen tree. Some species in the genera Epigaea, Arctostaphylos and Gaultheria were formerly classified in Arbutus. As a result of its past classification, Epigaea repens (Mayflower) has an alternative common name of "trailing arbutus".

A recent study which analyzed ribosomal DNA from Arbutus and related genera suggests that Arbutus is paraphyletic and the Mediterranean Basin species of Arbutus are more closely related to Arctostaphylos, Arctous, Comarostaphylis, Ornithostaphylos and Xylococcus than to the western North American species of Arbutus, and that the split between the two groups of species occurred at the Paleogene/Neogene boundary.[4]

Arbutus species are used as food plants by some Lepidoptera species including Emperor Moth, Pavonia pavonia. 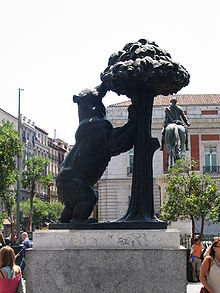 The bear and the tree at Puerta del Sol, Madrid

Several species are widely cultivated as ornamental plants outside of their natural ranges, though cultivation is often difficult due to their intolerance of root disturbance. The hybrid Arbutus 'Marina' is much more adaptable and thrives under garden conditions.

The Arbutus unedo tree makes up part of the coat of arms (El oso y el madroño, The Bear and the Strawberry Tree) of the city of Madrid, Spain. In the center of the city (Puerta del Sol) there is a statue of a bear eating the fruit of the Madroño tree. The image appears on city crests, taxi cabs, man-hole covers, and other city infrastructure. The fruit of the Madroño tree ferments on the tree if left to ripen, so some of the bears become drunk from eating the berries.[citation needed]

The Arbutus was important to the Straits Salish people of Vancouver Island, who used arbutus bark and leaves to create medicines for colds, stomach problems, and tuberculosis, and as the basis for contraceptives. The tree also figured into certain myths of the Straits Salish.[6]

The fruit is edible but has minimal flavour and is not widely eaten. In Portugal the fruit is sometimes distilled (legally or not) into a potent brandy known as medronho. In Madrid the fruit is distilled into Madroño, a sweet, fruity liqueur.

Arbutus is a great fuelwood tree since it burns hot and long. Many Pacific Northwest states in the United States use the wood of A. menziesii primarily as a heat source,[citation needed] as the wood holds no value in the production of homes since it doesn't grow in straight timbers.

According to the Straits Salish, an anthropomorphic form of pitch would go fishing, but return to shore before it got too hot. One day he was too late getting back to shore and melted from the heat and several anthropomorphic trees rushed to get him - the first was Douglas Fir, who took most of the pitch, the Grand Fir received a small portion, and the Madrone received none - which is why they say it still has no pitch.

Also, according to the Great Flood legends of several tribes in the northwest, the madrone helped people survive by providing an anchor on top of a mountain. Because of this the Saanich people do not burn madrone out of thanks for saving them.[7]