The crone is a stock character in folklore and fairy tale, an old woman who is usually disagreeable, malicious, or sinister in manner, often with magical or supernatural associations that can make her either helpful or obstructing. She is marginalized by her exclusion from the reproductive cycle,[1] and her proximity to death places her in contact with occult wisdom. As a character type, the crone shares characteristics with the hag.

The word "crone" is a less common synonym for "old woman," and is more likely to appear in reference to traditional narratives than in contemporary everyday usage.[2] The word became further specialized as the third aspect of the Triple Goddess popularized by Robert Graves and subsequently in some forms of neopaganism, particularly Wicca.

As a noun, crone entered the English language around the year 1390, deriving from the Anglo-French word carogne (an insult), itself deriving from the Old North French carogne, caroigne, meaning a disagreeable woman (literally meaning "carrion"). Prior to the entrance of the word into English, the surname Hopcrone is recorded (around 1323–1324).[3]

In Joseph Campbell's classic work The Hero with a Thousand Faces, the first encounter of the hero on his journey is with a protective figure who provides him with amulets or magic devices against the dangers he will face. The crone is one of the most common of these protective figures.[4] 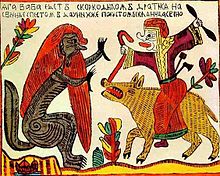 Baba Yaga rides a pig and fights the infernal crocodile

The Slavic witch Baba Yaga is a crone and liminal guardian to the Otherworld.[8]

In the local folklore of Somerset in southwest England, The Woman of the Mist is said to appear sometimes as a crone gathering sticks; sightings of her were reported as late as the 1950s.[9] In the Scottish Highlands tale "The Poor Brother and the Rich," a crone refuses to stay buried until her son-in-law provides a generous wake, after which he becomes as wealthy as his more fortunate brother.[10]