He was elected to the Baseball Hall of Fame in 1963.

Clarkson had a wide variety of curve balls and was considered to be a calculating, scientific pitcher who carefully analyzed every hitter's weaknesses. Hall of Fame hitter Sam Thompson said of Clarkson: “I faced him in scores of games and I can truthfully say that never in all that time did I get a pitch that came where I expected it or in the way in which I guessed it was coming.”[1]

At the time Clarkson retired from the game, he was the winningest pitcher in National League history.[1]

Aside from being a great pitcher, Clarkson was also a fair hitter. His 24 career home runs (in the deadball era) ranks 7th on the all-time MLB home run list for pitchers. He also had 232 career RBIs and 254 runs scored.

Total Baseball ranked Clarkson as the fourth best pitcher of all time behind Hall of Famers Cy Young, Christy Mathewson and Lefty Grove,[2] though Bill James ranks him much lower, at No. 42, in his The New Bill James Historical Baseball Abstract.

Clarkson's election to the Baseball Hall of Fame in 1963 was by the Veterans Committee.

Born in Cambridge, Massachusetts, Clarkson was one of five sons of a prosperous jeweler.[3] Clakson had two brothers who were also major league pitchers: Dad Clarkson and Walter Clarkson. The three Clarkson brothers rank third in wins by brothers behind the Niekro and Perry brothers. The Clarkson's also had two maternal cousins, Walter Hackett and Mortimer "Mert" Hackett who played professional baseball.

After attending business school and playing semipro ball, Clarkson signed as a free agent with the Worcester Ruby Legs of the National League in 1882. Clarkson played his first major league game at age 20 on May 2, 1882. He played in three games for the Ruby Legs, finishing with a 1-2 record in 24 innings. The Worcester team folded after the 1882 season, and Clarkson pitched in the minors the following two years.[3]

Chicago manager Cap Anson saw Clarkson pitching for Saginaw in the Northwest League in 1884.[3] On August 24, 1884, the White Stockings purchased him from Saginaw.

The White Stockings finished in fifth place in 1884, but Clarkson put in a strong performance, going 10-3 in 13 starts after being acquired from Saginaw. His .769 win percentage was the second best in the league, and his 2.14 ERA was sixth best.

Clarkson was known to be extremely sensitive to criticism. Shortly after his death in 1909, former Chicago player/manager Cap Anson noted that "not many know what amount of encouragement it took to keep him going." Anson recalled: "Scold him, find fault with him, and he would not pitch at all. Say to him after a game: 'Grand work, John, I will probably use you again tomorrow, for we've got to have that game,' and he would go out the next day and stand all batters on their heads.'" Alfred H. Spink, The National Game (1910), quoted in Bill James, The New Bill James Historical Baseball Abstract (2001), p. 873.[3] 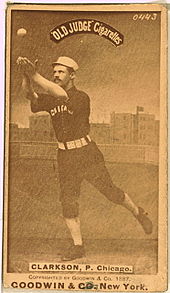 John Clarkson as a player for the Chicago White Stockings.

In 1885, Clarkson became Chicago's principal starting pitcher. In a remarkable feat of durability, Clarkson appeared in 70 games that year, pitched 623 innings and threw 68 complete games. He also won 53 games with an ERA of 1.85 (Adjusted ERA+ of 165).

The White Stockings won the 1885 National League pennant with 83 wins, 53 of which came from Clarkson. Clarkson started three games in the 1885 World Series against the St. Louis Browns, with a record of 1-1 and an ERA of 1.12, allowing only two earned runs in 16 innings.

Clarkson's performance in 1885 led the National League in wins (53) and strikeouts (308) and ranks as one of the most remarkable in major league history.

In 1886, Clarkson shared the pitching load with Jim McCormick and Jocko Flynn, each of whom won at least 23 games and pitched over 250 innings. Clarkson had a record of 36-17, with 50 complete games and an ERA of 2.41 (Adjusted ERA+ of 150) in 466⅔ innings pitched. He also led the league with a career-high 313 strikeouts. On August 8, 1886, Clarkson struck out a team-record 16 batters against Kansas City.

The 1886 White Stockings finished with a record of 90-34 with a winning percentage of .726 that ranks as one of the highest in baseball history. After winning the National League pennant by 2½ games over the Detroit Wolverines, the White Stockings faced the St. Louis Browns in the World Series for the second consecutive year.

Clarkson pitched four games (three of which were complete games) in the 1886 World Series. He had a record of 2-2 with 28 strikeouts and an ERA of 2.04 in 31 innings pitched.

The sixth game, at St. Louis, was considered one of the greatest games ever played to that time. With the Browns ahead three games to two, Anson called on Clarkson to start his fourth game in six days. Clarkson responded with seven shutout innings, but gave up three runs in the eighth inning, and the game went to extra innings. In the bottom of the tenth inning, the Browns' center fielder Curt Welch singled (only the fourth hit off Clarkson) and moved to third on a sacrifice. Welch and Browns’ third base coach Arlie Latham tried to distract Clarkson with heckling and faking moves toward home. When Welch finally attempted the steal, Chicago's catcher, King Kelly, had called for a pitchout, but Clarkson threw a wild pitch, and Welch scored the World Series winning run.[2][3]

In 1887, Clarkson was 38-21 for Chicago with 56 complete games and a 3.08 ERA. However, King Kelly was sold to Boston before the season began, and the team began a decline, dropping to third place in 1887. Clarkson, always a touchy temperament, reportedly became more difficult to handle after Kelly's departure.[3] 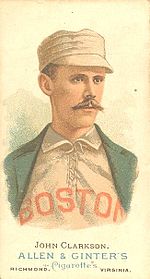 On April 3, 1888, the White Stockings sold Clarkson to the Boston Beaneaters for $10,000—a huge sum at the time. Clarkson followed teammate King Kelly, who had been sold from Chicago to Boston the previous year. Boston had paid $10,000 apiece for Kelly and Clarkson, and they became known as the “$20,000 Battery.”

On June 4, 1889, Clarkson became the first pitcher in major league history to strike out three batters on nine pitches, in the third inning of a 4-2 win over the Philadelphia Quakers.

Clarkson became involved in the players' rebellion in 1890, but then opted to remain with the Beaneaters.[3]

In 1891, Clarkson helped lead the Beaneaters to the National League pennant. Clarkson led the team with a 33-19 record, 47 complete games, and 460⅔ innings pitched.

During a game that carried into the dusk hours, Clarkson once pitched a lemon to the plate to persuade the umpire, Jack Kerins to call the game due to darkness. Kerins called the lemon a strike, and when shown by Boston’s catcher that he had called a lemon a strike, Kerins finally called the game.[3][8]

Clarkson was no longer the ace with the Spiders. The Spiders’ pitching staff included Cy Young, who won 36 games in 1892 and 34 games in 1893.

After the 1893 season, Clarkson went on a hunting trip with his close friend Charlie Bennett, who had been his catcher from 1888 to 1890. Bennett got off the train in Wellsville, Kansas and when he tried to reboard, Bennett slipped and fell under the train’s wheels. Bennett lost both of his legs in the accident. Clarkson witnessed the incident, and it was said to have severely affected his already unstable nature.

After his baseball career ended, Clarkson moved to Bay City, Michigan and ran a cigar store there until 1906.[3][9]

In either 1905[3] or 1906,[2] Clarkson suffered a breakdown, was declared insane, and was committed to an insane asylum. Clarkson spent much of the next three years in mental hospitals.

During a visit with family in 1909, Clarkson fell seriously ill, and was admitted to the McLean Hospital in Waltham, Massachusetts, a well-known psychiatric clinic. He died there, of pneumonia, February 4, 1909, aged 47.[3] Baseball History: 19th Century Baseball: The Players: John Clarkson at www.19cbaseball.com