Maude Adams
This article is about the American stage actress. For the Swedish actress and model, see Maud Adams.

Maude Ewing Kiskadden (November 11, 1872 – July 17, 1953), known professionally as Maude Adams, was an American stage actress who achieved her greatest success as Peter Pan.[1][2] Adams's personality appealed to a large audience and helped her become the most successful[3][4][5] and highest-paid performer of her day, with a yearly income of more than one million dollars during her peak.[3] She was often referred to simply as "Maudie" by her fans. 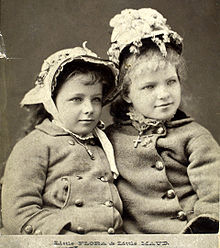 Little is known of Adams's father. He died in 1878 when Maude was only six. It has been written that he came to Utah from Montana, and that the Kiskaddens originated in Ohio. He was not a Mormon (member of the Church of Jesus Christ of Latter-day Saints, aka "LDS Church"), and Adams herself once wrote of her father as having been a "gentile". The surname "Kiskadden" is Scottish.[6] Most of what is known of her ancestry traces through her maternal grandmother, Julia Ann Adams (née Banker).

The Banker family came from Plattsburgh, a small town in upstate New York. Maude's great grandfather Platt Banker converted to the LDS Church, and it is said that the family migrated to Missouri with fellow members of the LDS Church.[citation needed] Whether this is true or not, the family did migrate to Missouri, where Julia married Barnabus Adams (is not a distant cousin of Presidents John Adams and John Quincy Adams). The family then migrated to Utah, settling in Salt Lake City where Maude's mother, Asaneth Ann "Annie" Adams was born. Maude Adams was also a descendant of Mayflower passenger John Howland.

The true extent of Maude Adams's connection to the LDS Church remains somewhat of a mystery. It was little spoken of in her lifetime, and Adams was known to take long sabbaticals in Catholic rectories. In 1922 she donated her estates at Lake Ronkonkoma to one of these places, the Sisters of St. Regis, for use as a novitiate and retreat house.[7][8] Because of this, and because her father was not a member of the LDS Church, it has been speculated that Maude was not a practicing Mormon.

Her mother, Asaneth Ann Kiskadden, was an actress and, travelling with her, Maude spent her early years in provincial theaters, first appearing in plays at the age of nine months when she was carried onstage in her mother’s arms. At the age of five, she starred in a San Francisco theater as "Little Schneider" in Fritz, Our German Cousin and as "Adrienne Renaud" in A Celebrated Case. Often described as shy, Adams was referred to by Ethel Barrymore as the "original 'I want to be alone' woman".[3] She gave the impression of being refined and dignified at all times, and she was openly helpful to aspiring young actors and actresses. She was known at times to raise the salaries of fellow performers out of her own pocket and also for quietly giving small gifts to stagehands.[4] Once while touring, a theater owner doubled the price of tickets knowing Adams's name meant a sold-out house. Adams made the owner refund the difference before she appeared on the stage that night.[4]

After touring in Boston and California, she made her New York City debut at age 16 in The Paymaster. Remaining in New York after the close of the play, she then became a member of E. H. Sothern's theater company appearing in The Highest Bidder and finally on Broadway in Lord Chumley. Charles H. Hoyt then cast her in The Midnight Bell where audiences, if not the critics, took notice of her. Sensing he had a potential new star on his hands, Hoyt offered her a five year contract, but Adams declined in favor of a lesser offer from the powerful producer Charles Frohman who from that point forward took control of her career.[citation needed] 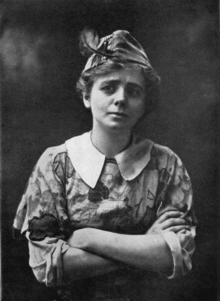 In 1890, Frohman asked David Belasco and Henry C. de Mille to specially write the part of Dora Prescott for her in their new play Men and Women, which Frohman was producing. The next year, she appeared as Nell in The Lost Paradise.

In 1892, John Drew, Jr. (one of the leading stars of the day) ended his eighteen year association with Augustin Daly and joined Frohman's company. Frohman paired Adams and Drew in a series of plays beginning with The Masked Ball and ending with Rosemary in 1896, at last taking ingénue roles. She spent five years as the leading lady in John Drew's company.[9]

The Masked Ball opened on October 8, 1892. Audiences came to see its star, John Drew, but left remembering Maude Adams. Most memorable was a scene in which her character feigned tipsiness for which she received a two minute ovation on opening night. Drew was the star, but it was for Adams that the audience gave twelve curtain calls, and previously tepid critics gave generous reviews. Harpers Weekly wrote: "It is difficult to see just who is going to prevent Miss Adams from becoming the leading exponent of light comedy in America.

The New York Times wrote that "Maud Adams [sic], not John Drew, has made the success of The Masked Ball at Palmer's, and is the star of the comedy. Manager Charles Frohman, in attempting to exploit one star, has happened upon another of greater magnitude." The tipsy scene started Adams on her path to being a favorite among New York audiences and led to an eighteen month run for the play. Less successful plays followed, including The Butterflies, The Bauble Shop, Christopher, Jr., The Imprudent Young Couple and The Squire of Dames. But 1896 saw an upturn with Rosemary. A comedy about the failed elopement of a young couple, sheltered for the night by an older man (Drew), the play received critical praise and box office success. J. M. Barrie (future author of Peter Pan) saw a performance and decided that Adams was the actress to play Miss Babbie in the adaptation of his book The Little Minister. 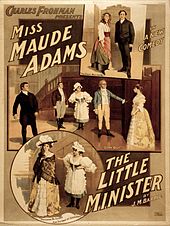 Adams in The Little Minister

Charles Frohman had been pursuing J. M. Barrie to adapt the author's popular book The Little Minister into a play, but Barrie had resisted because he felt there was no actress who could play Lady Babbie.[10] On a trip to New York in 1896, Barrie attended a performance of Rosemary and at once felt he had found his Lady Babbie. Bruce Adamson wrote: "On November 1, 1897 Maude Adams, Ethel Barrymore and John Drew performed in Rosemary, at the Opening Night of The Waldorf-Astoria Hotel before her close friends Jonas, Grace and Lillian Kissam, and the George W. Ely's. Lillian's husband Henry Bidwell Ely was in charge of building the Astoria Hotel for John Jacob Astor. Lillian's grandfather Abner Bartlett built The Waldorf Hotel for William Waldorf Astor." [10][11] Frohman worried that the masculine aspects of the book might overshadow Adams's role. With Barrie's consent, several key scenes were changed to favor Lady Babbie.[12] The play was a tremendous success, running for three hundred performances in New York (289 of which were standing room only) and set a new all time box office record of $370,000.[13][14] In one year, Adams had been transformed from a popular supporting player into one of the biggest stars on Broadway.[citation needed]

Her greatest triumphs followed with more works of Barrie, including The Little Minister, Quality Street, What Every Woman Knows, A Kiss for Cinderella, The Legend of Leonora, and Peter Pan; or, The Boy Who Wouldn't Grow Up, the latter being the role with which she was most closely identified and which she often reprised. Adams was the first actress to play Peter Pan on Broadway. Only days after her casting was announced, Adams had an emergency appendectomy and it was uncertain whether her health would allow her to assume the role as planned. Peter Pan opened on October 16, 1905 at the National Theatre in Washington, D.C. to little success.[15] It soon moved to Broadway, however, where the play had a long run, and Adams appeared in the role on Broadway several times over the following decade.[citation needed]

Adams as Joan of Arc, painted by Alphonse Mucha

While Adams was mainly associated with the plays of Barrie from 1897 until her retirement in 1918, she also made appearances in other works during that period. The Little Minister was followed in 1899 with her portrayal of Shakespeare's Juliet. While audiences loved her in the role, selling out the sixteen performances in New York, the critics disliked it.

Romeo and Juliet was followed by L'Aiglon in 1900, a French play about the life of Napoleon II of France in which Adams played the leading role, foreshadowing her portrayal of another male (Peter Pan) five years later. The play had starred Sarah Bernhardt in Paris with enthusiastic reviews, but Adams's L'Aiglon received mixed reviews in New York. In 1909, she played Joan of Arc in Friedrich Schiller's The Maid of Orleans. This was produced on a huge scale at the Harvard University Stadium by Frohman.[16] The June 24, 1909 edition of the Paducah Evening Sun (Kentucky) contains the following excerpt:

Joan at Harvard, Schiller's Play reproduced on Gigantic scale. […] The experiment of producing Schiller's "Maid of Orleans" beneath starry skies … was carried out…by ... Adams and a company numbering about two thousand persons … at the Harvard Stadium. … A special electric light plant was installed … a great cathedral was erected, background constructed and a realistic forest created. … Miss Adams was accorded an ovation at the end of the performance.[17]

She appeared in another French play with 1911's Chantecler, the story of a rooster who believes his crowing makes the sun rise.[18] She fared only slightly better than in L'Aiglon with the critics, but audiences again embraced her, on one occasion giving her twenty two curtain calls.[18] Adams later cited it as her favorite role, with Peter Pan a close second.

Adams last appeared on the New York stage in A Kiss for Cinderella in 1916. Following a thirteen year retirement from the stage, during which she worked with General Electric to develop improved and more powerful stage lighting, she appeared in several regional productions of Shakespeare. It has been suggested that the true reason for her association with General Electric (in developing better lighting instruments) and the Eastman Company (in developing color photography) during the 1920s was because she wished to appear in a color film version of Peter Pan, and this would have required better lighting for color photography.[19]

Adams headed the drama department at Stephens College in Missouri from 1937 to 1943, becoming well known as an inspiring teacher in the arts of acting.[9][20]

After her retirement in 1918, Adams was on occasion pursued for roles in film. The closest she came to accepting was in 1938, when producer David O. Selznick persuaded her to do a screen test (with Janet Gaynor, who would later play the female lead) for the role of Miss Fortune in the film The Young in Heart. After negotiations failed, the role was played by Minnie Dupree, who like Adams had been a girlish whimsical type of actress. The twelve-minute screen test was later preserved by the George Eastman House in 2004.[21]

She died, aged 80, at her summer home, Caddam Hill, in Tannersville, New York, and is interred in the cemetery of the Sisters of the Cenacle, Lake Ronkonkoma, New York.[22][23]

The character of Elise McKenna in Richard Matheson's 1975 novel Bid Time Return and its 1980 film adaptation, Somewhere in Time, in which the character was played by Jane Seymour, was reportedly based on Maude Adams.[24][25] In the novel, Elise is appearing in The Little Minister, which role was also said to have been written especially for her.[citation needed]