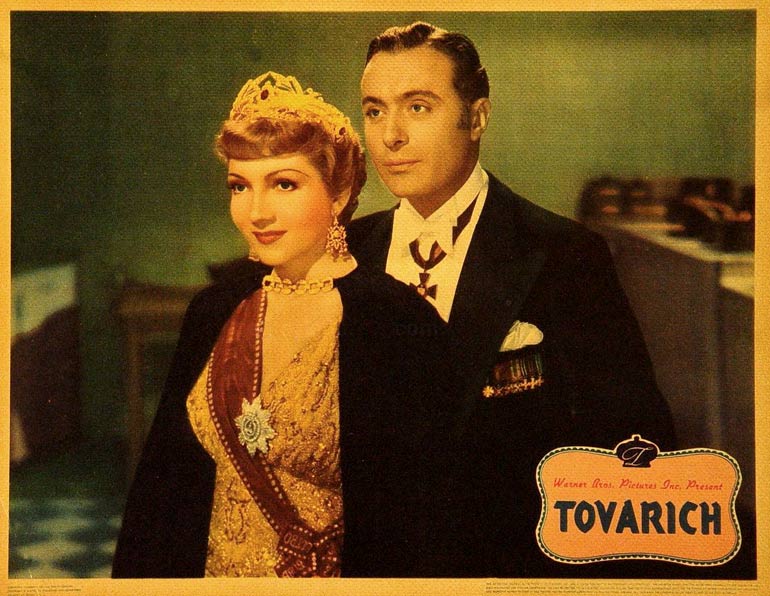 "Tovarich" (the Russian word for comrade) is a 1937 based on the play by . It was produced and directed by with Robert Lord as associate producer and and as executive producers. The was by Casey Robinson from the French play by Jacques Deval adapted into English by Robert E. Sherwood. The music score was by and the cinematography by .

Russian Prince Mikail Alexandrovitch Ouratieff (Charles Boyer) and his wife, Grand Duchess Tatiana Petrovna (Claudette Colbert) flee from the Russian Revolution to with the 's fortune, which he has entrusted to them for safekeeping. They keep the money in a bank, faithfully refusing to spend any of it for themselves. Then, destitute, they are forced to take jobs under false identities as butler and maid in the household of wealthy Charles Dupont (Melville Cooper), his wife Fermonde (), and their children, Helene () and Georges (Maurice Murphy). After a shaky start, the servants gradually endear themselves to their employers. However, their secret is finally exposed when one of the guests at a dinner party, Soviet Gorotchenko (Basil Rathbone), recognises them.

* This is the first Warner Bros. film to begin with the famous Warners fanfare, which was composed by Max Steiner.
* The original play by Jacques Deval opened in on 13 October 1933. Robert E. Sherwood's English adaptation opened in on 24 April 1935, (Melville Cooper reprised his stage role for the movie) and on Broadway on Oct 15, 1936, starring .
* The play was made into a Broadway musical "Tovarich" (1963) (Book by David Shaw, music by Lee Pockriss and lyrics by (Anne Croswell) starring and . It ran for 264 performances and won Leigh the for Best Actress.