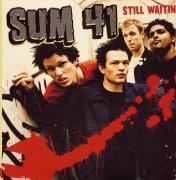 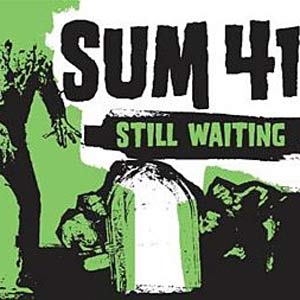 Still Waiting is the first single from by .

The -directed video starts with the boys entering a the office of a record executive (played by ). The aforementioned executive is on the phone, and ends his call by saying "I gotta go, I think I'm about to get mugged" (a joke concerning the band's ragged appearance). After Sum 41 enters his office, the band asks him if he liked the new album. He says he hasn't heard it yet but he guesses it's all sort of songs about skateboarding and getting dumped. He said he called them in because the "number band thing" is out and lists examples and " 75" (mocking the supposed lack of knowledge record executives have of music and musicians) and says "The" is the new thing (probably mocking the of the early 00's) and changes their name to "The Sums" and the members' individual names (Deryck is "Sven", Cone is "Thurston", Dave is "Holmes" and Stevo is "Sergio"). He then throws Stevo a pack of cigarettes, because drinking and smoking is the "in" thing. The set is a spoof of and and features random images of arcade games. The video was retired on MTV's TRL. There is also a blooper in the video where Stevo's cymbals and tom fall. Later you see that they are restored back in place later in the video. And then once again at the end of the video youll see again that the tom and cymbals are still down.

Executive - (phone) I've got to go, I think I'm about to get mugged
Executive - Hi guys, yeah hi, how are you doing? Have a seat. Take it easy on those chairs, .
Stevo - Have you heard the new album?
Executive - No I haven't heard the new...album. I'm sure it's great, all sorts of songs about skateboarding and getting dumped. Love this one here though! (Shows the album and mocks the cover)
Executive - Listen, the reason I called you guys in here is the name - Sum 41, the number band...thing is out, ok? , Green Day 75, these names are not cool.
Executive - What's in now is "the", ok? , The - I can't see you! (Pushes over the lamp hiding Dave's face) - , , , this isn't new. The Led Zeppelins, right, are you feeling me? Executive - Guys, check this out. The Sums. The Sums? What's in now is drinking your beer and smoking - You guys smoke? (Stevo mutters "no" and so executive turns to him) Yeah, you do now! How do you like that? (throws cigarettes to Stevo) Smoke 'em up Johnny! (looks over to Deryck) Whats your name?
Deryck - (puzzled) Deryck?
Executive - Not anymore, it isn't, it's Sven. You like it? Its Great. Its "Great".
Stevo - I don't know...
Executive - It's "GREAT"!
Dave - I guess so...
Deryck - The Sums?