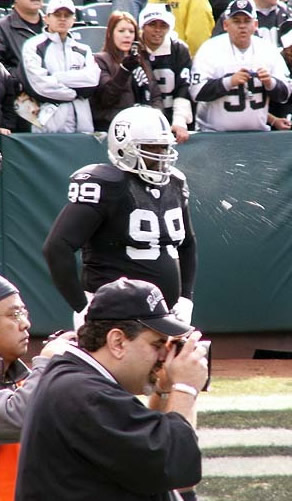 width=200
caption=Warren Sapp during his tenure with the Raiders.
position=
number=99
birthdate=birth date and age|1972|12|19

Warren Carlos Sapp (born , in ) is a retired player who played in the . He played for the and the during his 13 year professional career, and for the Hurricanes. He was then drafted by the Buccaneers in the as the 12th overall pick. He spent nine seasons with the team where he earned seven trips to the and a Super Bowl ring in 2002. He moved to the Raiders in 2004.

His 96.5 career sacks are the second-highest career total sacks for a defensive tackle and the 28th highest overall for a . His 77 sacks with the Buccaneers is second in the team's history.During Sapp's career, he has been the source of some controversy because of his hard-hitting style of play and his occasional verbal outbursts, both on the field and off. Some of these resulted in NFL fines, and he was once ejected from a game for unsportsmanlike conduct.

Sapp was raised in , a small, a rural community on the Lake County/ line. During the late 1980s he got the biggest honor, recognition as an outstanding football player at in as a linebacker, tight end and punter.

In addition to excelling in football, Sapp was also an All-State baseball player. Sapp played both third base and shortstop for Apopka High, and compiled a batting average of .376 with 11 home runs during his senior season. Sapp was drafted in the 39th round of the Major League Baseball draft by the Atlanta Braves, but choose to pursue his career in football and attend the University of Miami. Sapp still has the record for longest home run at Mark Light Field estimated at 511 feet.

Many top national colleges sought him out as a football player; Sapp chose to play for the . Converted to defensive lineman while there, Sapp would win the (best defensive player), the (defensive player), and the (best lineman or linebacker) all in 1994. He was also named to many teams.

After playing at the University of Miami, where he was a defensive standout, Sapp was drafted into the NFL by the in the first round of the 1995 draft (12th pick overall). Sapp ran the fastest defensive end forty time, recording a 4.69 time. Upon joining Tampa Bay, Sapp was almost immediately given the starting job at the position of right defensive tackle and finished his rookie season with 27 tackles and one . Sapp continued to be a prolific, intimidating tackler for the Buccaneers, tallying 51 tackles and nine sacks in 1996 and 58 tackles and 10.5 sacks in 1997. In 1997, Sapp was named to his first . It was the first of seven straight selections.Sapp was named 1999 NFL Defensive Player of the year.

In 2002, Sapp helped lead a resurgent Tampa Bay team to victory in over the . Sapp had five tackles and two sacks during the 2002-2003 postseason.

In 2004, it was reported that Sapp was interested in accepting a contract offer from the for four years worth US $16 million. However, on , he announced that he had agreed to terms on a seven-year, $36.6 million contract with the Raiders.Sapp started all 16 games in his first season with the Raiders, splitting time at as well as . Sapp recorded 42 tackles (33 solo), 2.5 sacks (Sapp's lowest career sack total) and recovered two fumbles.2005 started out as a great year for Sapp, as he was moved back to his familiar DT position. He started the first ten games of the season recording 29 tackles (25 of them solo), and finished second on the team to Derrick Burgess with five sacks. Sapp was sidelined for the last six games of '05 with a shoulder injury

He is currently a member of NFL Network. He debuted talking about Brett Favre being traded to the Jets.

On , , at , Sapp drew criticism for blocking the ' during an interception return by the Buccaneers. Clifton was jogging down field, away from the main action, and was blindsided by Sapp.

Packers' coach Mike Sherman approached Sapp and said to him "You're a chicken shit."

During pre-game warm-ups of a , game at , Sapp skipped through the . Steelers running back shoved Sapp, and this was followed by a heated argument between the two teams. Sapp was not fined for the incident, but it added to his controversial image. Sapp felt that he was made an example by the NFL by being fined for that first skipping incident. "That's all this is about," said Sapp. "In my nine years in this league, no one's been fined for verbally abusing officials. It's unprecedented."

In 2003, during an game against the , Sapp was scolded for skipping through and disrupting the Colts players, who were spread out on the field, stretching during pre-game warmups. There was much anticipation and national interest going into the game, which was the return of former head coach to . The Colts wound up erasing a 21-point deficit in the final four minutes, and defeated the Buccaneers 38-35 in overtime, initiating a downslide for the defending champions.

A week later, on , , prior to the game against the , Sapp was running onto the field when he bumped into an referee. The incident drew a fine of $50,000. Sapp's response to the fine : "It's a slave system. Make no mistake about it. Slave master say you can't do it, don't do it. They'll make an example out of you."

On December 23, 2007, Sapp was involved in an altercation with NFL referees near the end of the second quarter of the Raiders' game at Jacksonville [ [http://www.sfgate.com/cgi-bin/article.cgi?f=/c/a/2007/12/27/SPH6U4SFE.DTL Sapp still gesturing, yelling, says he didn't touch official ] ] .

The incident began when linesman Jerry Bergman mistakenly assumed that the Raiders wished to decline a Jacksonville 10-yard penalty. Sapp, the defensive captain, began speaking with referee , indicating that the Raiders instead wished to accept the penalty. The conversation became heated, with Sapp gesturing and swearing. This resulted in an unsportsmanlike conduct call by Boger against Sapp. Sapp and his defensive teammates continued interacting with the officials after the penalty was called, resulting in a second unsportsmanlike conduct penalty against Sapp and an another unsportsmanlike conduct penalty assessed against teammate . Finally, the coaches and officiating staff entered the field and began physically separating and removing the arguing players. Boger claimed that during this time Sapp "bumped" him; Sapp denies making physical contact. Regardless, at this point Boger levied a third unsportsmanlike conduct penalty against Sapp and ejected him from the game. Sapp did not play in the second half and was eventually fined $75,000 by the ; Burgess received a $25,000 fine [ [http://www.sfgate.com/cgi-bin/blogs/sfgate/detail?blogid=11&entry_id=22997 SFGate: Raiders Silver and Black Blog : Fine day: Sapp fined 75k, Burgess dinged for 25k ] ] .

On September 8, 2008, Sapp made comments about Florida head coach Urban Meyer, when Meyer decided to kick a field goal, during the Florida-Miami game on September 6, 2008, where Florida won 26-3. It was Florida’s first win since 1985 in the on-again, off-again series.

"(He's) a classless dirtbag." – Former Miami defensive tackle Warren Sapp, speaking about Meyer's decision to go for the late field goal. Sapp made the comment during a conference call to promote Showtime's production of "Inside The NFL."

* Sapp's agent was fellow University of Miami alumnus , widely considered one of the most aggressive agents currently representing NFL players.
* Sapp's first TV appearance as a Raider was on "" post- episode, "". In the episode, Homer teaches Sapp to perform victory celebrations after making a play, one being when Sapp tackles another player, he takes out an easel and paints a picture of the tackled player, with Sapp saying, "Art come from pain. Your pain!"
* Sapp was a college football teammate of Dwayne "The Rock" Johnson at the University of Miami.
* Sapp claimed to be the victim of frequent attempted poisonings when eating in restaurants. [ [http://sports.espn.go.com/nfl/news/story?id=2673763 ESPN.com "Sapp insists food was tampered with on road trips"] ]
* Sapp is currently a contestant on Season 7 of "", and is paired with Kym Johnson. [ [http://pophangover.com/tv/?p=124 Pophangover TV: "Dancing With The Stars Season 7 Cast"] ]