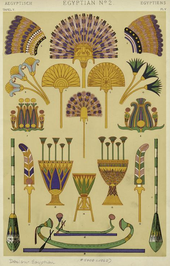 A flabellum (plural flabella), in Catholic liturgical use, is a fan made of metal, leather, silk, parchment or feathers, intended to keep away insects from the consecrated Body and Blood of Christ and from the priest,[1] as well as to show honour. The ceremonial use of such fans dates back to ancient Egypt, and an example was found in the tomb of Tutankhamun. A flabellum is also a fan-shaped structure on the fifth legs of horseshoe crabs (Xiphosura).

Flabella were in use in both pagan rituals and in the Christian Church from very early days. The Apostolic Constitutions, a work of the fourth century, state (VIII, 12): "Let two of the deacons, on each side of the altar, hold a fan, made up of thin membranes, or of the feathers of the peacock, or of fine cloth, and let them silently drive away the small animals that fly about, that they may not come near to the cups".

Flabella were originally used liturgically in the West as well as the East, but their use in the Mass was discontinued in the Latin Church about the fourteenth century.

Apart from the foregoing liturgical uses, a flabellum, in the shape of a fan, later of an umbrella or canopy, was used as a mark of honour for bishops and princes. Prior to Vatican II, two fans of this kind were used at the Vatican whenever the pope was carried in state on the sedia gestatoria to or from the altar or audience-chamber. Through the influence of Count Ditalmo di Brozza, the fans formerly used at the Vatican were, in 1902, presented to Mrs. Joseph Drexel of Philadelphia, USA, by Pope Leo XIII, and in return she gave a new pair to the Vatican. The old ones are exhibited in the museum of the University of Pennsylvania. The spread is formed of great ostrich plumes tipped with peacock feathers; on the palm (base of the fan) are the papal arms, worked in heavy gold on a crimson field, the tiara being studded with rubies and emeralds. The new pair of flabella is on display in the Vatican museum.

Lisbon Patriarchal Cathedral also holds two Flabella and one Sedia Gestatoria in its museum. It is thought the right of the Cardinal patriarchs to use such honour was granted after the efforts of king John V of Portugal that obtained the titles and other honours such as the use of a dove, symbolizing the holy spirit, above the Cardinal Patriarch's carriage, in imitation of that of the Popes.

In the Eastern Orthodox and Greek-Catholic Churches the sacred fan (Greek: άγιον ριπίδιον, hagion ripidion, plural: άγια ριπίδια, hagia ripidia; sometimes εξαπτέρυγον, hexapterygon, plural: εξαπτέρυγα hexapteryga—literally, "six-winged"), is still used to the present day. It is generally made of metal, round, having the iconographic likeness of a seraph with six wings surrounding a face, and is set on the end of a pole. Fans of carved, gilded, or painted wood are also found. They are usually made in pairs. 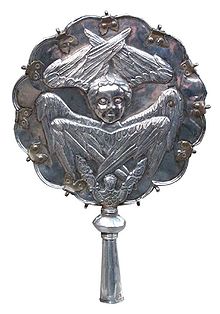 The deacon, according to the Service Books, stands by the Holy Table (altar) to fan the Sacred Gifts by waving it gently over them from the time of the Offertory to the Communion—in the Liturgy of St. Basil he does this only during the Consecration. This originally served the purpose of keeping flying insects away from the Sacred Gifts. Nowadays, the Gifts are usually covered, shortly following their sanctification, whenever the priest or deacon does not have his hand immediately near them so, while this action of fanning is called for in the service books to this day, the deacon normally only does so on the day of his ordination. At his ordination, a deacon, receives the fan from the bishop with his vestments and service book and is presented to the people for them to exclaim “Worthy!” holding the fan, and then stands behind the Holy Table (altar) to fan the Sacred Gifts according to the otherwise archaic practise.

Among the Eastern Orthodox, the fans will be carried during the Great Entrance and at all processions; among the Russians they are often also used to honour a particularly sacred icon or relic. When not in use, the fans are usually kept in stands behind the Holy Table in the Greek tradition and, in the Slavic traditions, may either be kept there or out of sight elsewhere in the altar. The latter is especially true in northern Russia, where, instead of the processional Cross and fans, icons of Christ and the Theotokos are usually placed behind the Holy Table.

Fans used by the Maronites, Oriental Orthodox and Assyrians are distinctive, having little hoops of metal or bells all around the circumference of the disks. At particularly solemn points of the liturgy, these are shaken gently to produce a tinkling and jingling sound, akin to the sound of multiple Sanctus bells.

Among the ornaments found belonging to the church of St. Riquier, in Ponthieu (813), there is a silver flabellum (Migne, P. L., CLXXIV, 1257), and for the chapel of Cisoin, near Lisle, another flabellum of silver is noted in the will of Everard (died 937), the founder of that abbey. When, in 1777, Martène wrote his "Voyage Littéraire", the Abbey of Tournus, on the Saône river in France, possessed an old flabellum, which had an ivory handle two feet long, and was beautifully carved; the two sides of the ivory circular disc were engraved with fourteen figures of saints. Pieces of this fan, dating from the eighth century, are in the Musée Cluny at Paris, and in the Collection Carrand.

Very ornate and impractical flabella were made in gold and jewels in the Romanesque period; the example in the Metropolitan Museum is especially intricate.[2]

Examples of the Eastern Christian style is also found in the Slavic ripidion of the thirteenth century, preserved at Moscow, and in the one shown in the Megaspileon monastery in Greece. On this latter disc are carved the Theotokos and Child and it is encircled by eight medallions containing the images of cherubim and of the Four Evangelists.

The inventory, taken in 1222, of the treasury of Salisbury, enumerates a silver fan and two of parchment.

The richest and most beautiful specimen is the flabellum of the thirteenth century in the Abbey of Kremsmünster in Upper Austria. It has the shape of a Greek cross and is ornamented with fretwork and the representation of the Resurrection of Christ.

St. Paul's Cathedral, London, had a fan made of peacock feathers, and York Cathedral's inventory mentions a silver handle of a fan, which was gilded and had upon it the enamelled picture of the bishop. Haymo (Hamo Hethe), Bishop of Rochester (died 1352), gave to his church a fan of silver with an ivory handle.