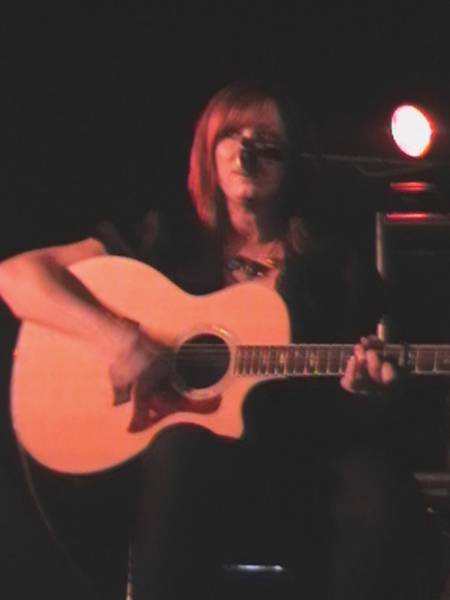 Suzy Bogguss (born Susan Kay Bogguss, , ) is an American . In the 1980s and 90s she released one platinum and three gold albums and charted six top ten singles, winning the 's award for Top New Female Vocalist and the 's Horizon Award.

After taking a brief recording hiatus in the mid-1990s to start a family with her husband, songwriter , Bogguss returned to the country music industry, but did not match her previous commercial success. Although she last appeared on the Billboard Hot Country Singles Chart in 2001, Bogguss continues to record and perform around the country to a small but loyal following.

Early life and rise to success

Bogguss was born in . At the age of 5, she began singing in the Angel of the College Avenue Presbyterian Church in her hometown. With the encouragement of her parents, she took lessons in and s, and as a teenager picked up the as well. She starred in several musicals at Aledo High School, where she was crowned homecoming queen during her senior year. After graduating in 1975, she enrolled at , but later transferred to , graduating in 1979 with a in .

While in college, Bogguss sang and played guitar in local , and after graduating became a regular on the club circuit in the area, performing frequently in Davenport, Rock Island, and Peoria. In 1980, she began touring the United States, and produced her first independent album, "Suzy", on the label. This LP was available for purchase at her shows and is now considered to be a rare collector's item.

In 1985, Bogguss moved to , where she worked as a demo singer by day and played in clubs at night. The following year, she became the first featured female performer at , a theme park owned by country music legend . This prompted her to produce an eponymous demo cassette, which she sold at her Dollywood shows. During this time she met songwriter and future husband , who penned one of the songs on the demo. Eventually, the demo caught the attention of a record label executive , who offered her a recording contract on the Liberty/Capitol Nashville label.

In 1987, Bogguss released her first singles on the Liberty/Capitol label. Of these ("I Don't Want to Set the World on Fire," "Love Will Never Slip Away," and "Come as You Were"), two succeeded in making the lower reaches of the country music charts, but were left off her first LP, "", in March, 1989. The album, with its blend of traditional and contemporary styles, drew positive reviews, and Bogguss finally struck gold when the record's second single, "Cross My Broken Heart," became a top twenty hit on the country music charts. Following its success, she was named the 's Top New Female Vocalist.

For her second album, "Moment of Truth", production tasks were taken over by new label-head and Nashville heavyweight , who moved Bogguss's sound in a more polished direction. However, the album's two singles failed to rise beyond the lower reaches of the Billboard charts. A duet she recorded with , "Hopelessly Yours," went to #12 on the country singles chart and received a nomination for Best Country Vocal Collaboration.

In 1991 Bogguss released the platinum-selling "Aces". The LP yielded four hit singles - "Someday Soon," "Outbound Plane," "Aces," and "Letting Go," the latter three all reaching the country Top Ten. The following year, the recognized her achievements by giving her its Horizon Award, awarded annually to the artist who has demonstrated the most significant creative growth and development.

Her 1992 follow-up, "", earned Bogguss her second straight gold record. The album's first single, a cover of 's "Drive South", just missed the #1 spot but gave Bogguss the highest-charting hit of her career to date. Her streak continued the following year with another gold record, "", giving her two additional Top Five hits in "Just Like the Weather" and "Hey Cinderella". The latter, which she cowrote with and , has gone on to become one of Bogguss's trademark songs.

After the successes of those two years, Bogguss changed direction, parting with Bowen, who had produced her four previous albums. Her 1994 release, "Simpatico", was a low-key album of duets with long-time friend and guitar legend . Although the album was generally well reviewed, its lone single, "One More for the Road," did not chart. Many feel this was due to Capitol's being distracted by the feud between Bowen and the label's biggest star at the time, .fact|date=April 2008 The disagreement ultimately ended with Bowen leaving the label and "Simpatico" falling through the cracks. The same year, Bogguss's "Greatest Hits" album was released and went gold.

Not long after "Simpatico" was recorded, Bogguss temporarily set her music aside to start a family. Bogguss and Crider's first child, Benton Charles Crider, was born on March 17, 1995. Sixteen months later, she was back with her sixth solo album (excluding her greatest hits compilation), entitled "Give Me Some Wheels". During her hiatus, the climate of country music had changed considerably, with more pop-oriented female singers such as , , and dominating the charts. Bogguss's traditional, straightforward style failed to connect with younger listeners, and the record yielded disappointing sales.

After her next album, 1998's "Nobody Love, Nobody Gets Hurt", also proved unsuccessful, Bogguss was dropped from the Liberty/Capitol label. With her typical grace and aplomb, she issued the following statement on February 18, 1999:

In May, 1999, Bogguss found a new home with Nashville-based fledgling label , headed by chief , who had formerly worked at Capitol. Within three months, she had released her debut, a self-titled album, not to be confused with the independently produced LP from her days as a traveling folk troubadour. (Adding to the confusion is the fact that the album is sometimes referred to as "It's a Perfect Day".) Again, the album floundered, with only one single even making an appearance on the country charts.

In 2001, Bogguss decided to form her own record label, Loyal Dutchess. Its first release was the album "Live at Caffé Milano", culled from three separate 1999 performances at the now-closed Caffé Milano in Nashville, TN. This release is only available for purchase at Bogguss's official website. A few months later, she released the holiday album, "Have Yourself a Merry Little Christmas", a combination of new and previously available material included through a special licensing agreement with her old label, Capitol. In addition to being available at her website, the CD was also offered through , select retailers, and at her live performances.

In March, 2003, Bogguss and her own Loyal Dutchess Records label secured a deal with . Her first release on this label was the pure album, "Swing", that she had been recording with producer , the 6'7" frontman of Western swing group . Although the album saw only lukewarm sales (it reached #6 on the jazz album charts, but failed to appear on the Billboard 200), it was a critical success. She then released "Sweet Danger" in 2007, which failed to reach the country charts, but peaked at #4 on the jazz charts.