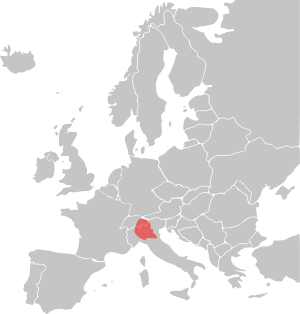 Lombard is a member of the Cisalpine or Gallo-Italic group within the Romance languages. It is spoken natively in Northern Italy (most of Lombardy and some areas of neighbouring regions, notably the eastern side of Piedmont) and Southern Switzerland (Ticino and Graubünden).

Lombard is considered a minority language, structurally separated from Italian, by the Ethnologue reference catalogue and by the UNESCO Red Book on Endangered Languages. However, the Italian Republic and Swiss Confederation do not recognise Lombard speakers as a linguistic minority. This official line is the same as for most other minority languages in Italy,[3] which are officially considered Italian dialects in spite of the fact that they belong to different sub-groups of the Romance language family, and in their historical development are in no way derivative of Italian [4][ (this fact being obscured to some extent by the use of Italian orthography to write these languages, and by influence from Italian[citation needed][dubious – discuss]).

Historically, the vast majority of Lombards spoke only Lombard,[5] though strictly monolingual Lombard speakers are now for all practical purposes non-existent — with everyone in Italy and Switzerland being able to understand Italian, though a very small minority may be uncomfortable speaking it[citation needed]. Surveys in Italy find that all Lombard speakers also speak Italian, and their command of each of the two languages varies according to their geographical position as well as their socio-economic situation, the most reliable predictor being the speakers' age.[6]

Position on the Romance language tree

From the point of view of language genealogy, Lombard and Italian are in some ways not as closely related, although both are neither Eastern nor Southern Romance[citation needed]. Romansh, Friulian, French, Franco-Provençal, and Occitan are closer relatives of Lombard in many aspects than Italian.[7]

A major distinction is usually made between Western (or Insubric) and Eastern Lombard varieties, although the two are sometimes considered as two languages[citation needed] . All the varieties spoken in the Swiss areas (both in canton Ticino and canton Graubünden) are Western, while both Western and Eastern varieties are found in the Italian areas. The varieties of the Italian cities of Milan, Varese, Como, Lecco, Lodi, Monza, Pavia and Mantua belong to the Western subgroup, while the ones of Bergamo, Brescia and Crema are Eastern. The varieties of the alpine valleys of Valchiavenna and Valtellina (province of Sondrio) and upper-Valcamonica (province of Brescia), together with the four Lombard valleys of Swiss canton Graubünden, although showing some peculiarities of their own and some traits in common with Eastern Lombard, should be considered as Western[citation needed]. Also, dialects from the Piedmontese provinces of Verbano-Cusio-Ossola and Novara, and the Valsesia valley (province of Vercelli) are closer to Western Lombard than to Piedmontese.[citation needed]

(See Western Lombard literature ). The Lombard variety with the oldest literary tradition (dating back to the thirteenth century) is that of Milan, where nowadays Milanese, the native Lombard variety of the area, has almost completely been superseded by Italian due to the heavy influx of immigrants from other parts of Italy (Puglia, Sicily, Campania, etc.) during the fast industrialization after World War II. Ticinese is a comprehensive denomination for the Lombard varieties spoken in Swiss Canton Ticino (Tessin), while the Ticinese koiné is the Western Lombard koiné used by speakers of local dialects (particularly those diverging from the koiné itself) when communicating with speakers of other Lombard dialects of Ticino, Grigioni, or Italian Lombardy. This koiné is not very unlike Milanese and the varieties of the neighbouring provinces on the Italian side of the border.

There is extant literature in other varieties of Lombard, for example La masséra da bé, a theatrical work in early Eastern Lombard, written by Galeazzo dagli Orzi (1492 - ?) presumably in 1554.[8]

Lombard-speaking communities (or, more precisely, the small portion of their members who could read and write) have been using for centuries some form of Latin or Tuscan (later known as Italian) as the language of written communication, not developing a standard written Lombard variety. 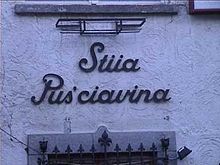 There is no generally recognised standard orthography[citation needed], but rather a few well-established conventions (like the one that word-final [t͡ʃ] and [k] should be written as -c and -ch respectively) and some competing traditions (e.g. [ø] and [y] are written oeu and u respectively according to the traditional Milanese orthography (well established in Milanese literature), while in Switzerland and in many Italian areas ö and ü are used respectively; this is also the most generalised trend nowadays). 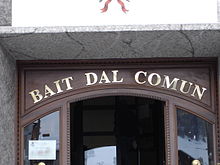 The Town Hall sign in the local Lombard variety of Livigno (SO), Italy

The CDE - Centro di dialettologia e di etnografia of Bellinzona, Switzerland (cf. below) has devised a rather advanced orthographic system used in its publications. This system does not break with the established conventions and at the same time it is able to render the actual phonological structures rather faithfully. The CDE system, however, is flawed by some inherent deficiencies, in particular as far as prosody is concerned, and in some situations it fails to distinguish between long and short vowels (e.g. the syllable rhyme -asc is written identically in casc [kaʃ] 'leaf-bud' and masc [maːʃ] 'May', although the vowel is actually short in the former case and long in the latter).

An improved system trying to reconcile the main features of the CDE system with the necessary amendments was published in 2003 (cf. Bibliography). This is the system used in the present article. It is the only system proposed so far featuring a unified set of writing rules meant to cover all the Lombard varieties of both Switzerland and Italy. According to this system, the words for 'May' and 'leaf-bud' in the example above are spelled, respectively, maasc and casc.

Note: unless otherwise specified, all examples below are forms common to most Western Lombard varieties, including the Ticinese koiné. The orthography is a compromise between traditional orthographies and a recently proposed unified system for all Lombard varieties, with phonetic transcriptions (when given) in IPA.[original research?]

The phoneme inventory of most Lombard varieties includes the front rounded vowels [y] and [ø].

Another uncommon feature for a Romance language, possibly derived from Lombardic, is the extensive use of idiomatic phrasal verbs (verb-particle constructions) much in the same way as in English and other Germanic languages. E.g. trà 'to draw, to pull', trà via 'to waste, to throw away', trà sü 'to vomit, to throw up', trà fö(ra) 'to remove, to take away'; majà 'to eat', majà fö(ra) 'to squander'.

Standard Italian is widely used in Lombard-speaking areas. However, the status of Lombard is quite different between the Swiss and Italian areas. This justifies the view that nowadays the Swiss areas have become the real stronghold of Lombard. 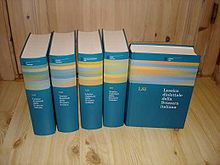 In the Swiss areas, the local Lombard varieties are generally better preserved and more vital than in Italy. No negative feelings are associated with the use of Lombard in everyday life, even when interacting with complete strangers. Some radio and television programmes in Lombard, particularly comedies, are occasionally broadcast by the Swiss Italian-speaking broadcasting company. Moreover, it is not uncommon for people from the street to answer in Lombard in spontaneous interviews. Even some television ads in Lombard have been reported. The major research institution working on Lombard dialects is located in Bellinzona, Switzerland (CDE - Centro di dialettologia e di etnografia, a governmental (cantonal) institution); there is no comparable institution in Italy. In December 2004, the CDE released the LSI, a dictionary in 5 volumes covering all the Lombard varieties spoken in the Swiss areas. This is so far the most comprehensive Lombard language resource ever published (more than 4,500 pages and about 57,000 lexemes with over 190,000 spoken variants).

The usage of Lombard dialects is generally scarce in present-day Italy[citation needed]. Today, in most areas of Italian Lombardy, people below forty years old speak almost exclusively Italian in their daily lives, because of schooling and television broadcasts in Italian. However, in Periferic Lombardy (Valtellina, Lake Como, Bergamo, Brescia, Lodi) Lombard Language is still vital.

This is due to a number of historical and social reasons: its usage has been historically discouraged by Italian politicians, probably as it was regarded as an obstacle to the attempt to create a 'national identity', to the point that speaking a non-standard variety was considered a sign of poor schooling or low social status[citation needed]. Presently the political party most supportive of Lombard (and of the varieties of Northern Italy in general) is the Northern League[citation needed] (in the past, on the other hand, the leftist parties were the ones giving support to local varieties[citation needed]); for this reason, speaking a dialect of certain non-Italian minority languages might be politically controversial in Italy.[citation needed]

A certain revival of the use of Lombard has been observed in the last decade, when the use of Lombard has become a way to express one's local identity and to distance oneself from Mediterranean-oriented mainstream Italian culture; the popularity of modern artists singing their lyrics in some Lombard variety (in Italian "rock dialettale", the most well-known of such artists being Davide Van de Sfroos) is also a relatively new but growing phenomenon involving both the Swiss and Italian areas.

Even people who speak a Lombard dialect with their family or friends, will almost always speak Italian language (or an approximation of it) to an outsider.[citation needed]