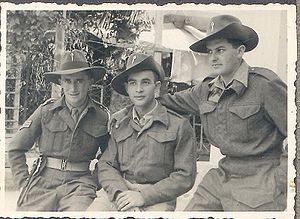 Three men from the SIG in Sarafend, Palestine, December 20, 1941. From left to right, Dov Cohen, Philip Kogel and Dolph Zentner.

The Special Interrogation Group (SIG) (some sources interpret this acronym as Special Identification Group or Special Intelligence Group) was a unit of the British Army during World War II. It was organized from German-speaking Jewish volunteers from the British Mandate of Palestine. The SIG performed commando and sabotage operations against Axis forces during the Western Desert Campaign.

The idea to create the SIG belonged to Herbert Cecil A. Buck, MC of the Punjabi Guards and Scots Guards.[1] , an Oxford scholar and German linguist who was captured and escaped from Egypt using German uniform. He subsequently became the SIG commander.

In March 1942, Col. Terence Airey (Military Intelligence Research at the War Office in London) wrote that "a Special German Group as a sub-unit of M[iddle] E[ast] Commando... with the cover name 'Special Interrogation Group', to be used for infiltration behind the German lines in the Western Desert, under 8th Army... the strength of the Special Group would be approximately that of a platoon... The personnel are fluent German linguists... mainly Palestinian (Jews) of German origin. Many of them have had war experience with No. 51 Commando..." [2]

Some personnel was also recruited directly from the Palmach, Haganah and the Irgun. Other recruits came from the Free Czech Forces, the French Foreign Legion and German-speaking Jewish troops. The SIG was a part of D Squadron, First Special Service Regiment. Its strength varied between 20 and 38, according to various sources.[2]

According to ex-SIG member Maurice "Tiffen" Monju Tieffenbrunner, their first training base was located near Suez.[2] The SIG were trained in desert navigation, unarmed combat, handling of German weapons and explosives. They were given fake German identities and taught German marching songs. For their missions, they were supplied with German pay books, cigarettes, chocolates, and even love letters to fictitious sweethearts in Germany.

Walter Essner and Herbert Brueckner, two non-Jewish Germans, had been conscripted from a POW camp to train the SIG. Before the war, both had been members of the French Foreign Legion who had been captured in November 1941 serving in the 361st Regiment of the Afrika Korps and were subsequently recruited by the British Combined Services Detailed Interrogation Centre (CSDIC) as double agents.

On June 3, 1942, the SIG was assigned its first mission: Operation Agreement to assist the Special Air Service, led by Lt. Col. David Stirling in destroying Luftwaffe airfields which were threatening the Malta Convoys. These airfields were located 100 miles west of Tobruk in the Italian colony of Libya.

During one raid, Herbert Brueckner managed to run away and betrayed them. Essner, closely guarded by Tiefenbrunner throughout the raid, was handed over to the Military Police and later shot.[3]

On September 13-14, 1942, the SIG participated in Operation Agreement, the raid on Tobruk. Its objective was to destroy the Afrika Korps' vital supply port. The SIG were to play the role of German guards transporting three truckloads of British POWs to a camp at Tobruk. The assault failed and the British forces lost three ships and several hundred soldiers and Marines. Surviving SIG members were transferred to the Auxiliary Military Pioneer Corps.

In January 1999, Maurice (Monju) Tiefenbrunner, a surviving member of SIG, recorded his life story in an unpublished autobiography booklet called "A Long Journey Home". On pages 37–41, he provides information on SIG unit formation and operations. A sample scan of the first pages is shown to the right.

After the SIG was disbanded, Tiefenbrunner was caught by the Italians, and sent to a POW camp in Italy. He was moved to a POW camp in Nazi German territory, where he met Vic Crockford.[4] They were released in early 1945.

The 1967 film Tobruk was about a raid of the SIG and the LRDG (Long Range Desert Group) on a German Afrika Korps fuel depot in Tobruk, starring Rock Hudson and George Peppard.