The National Theatre (Serbian: Народно позориште у Београду / Narodno Pozorište u Beogradu) was founded in the latter half of the 19th century. It is located on Republic Square, in Belgrade, Serbia.

The National Theatre was declared a Monument of Culture of Great Importance in 1983, and it is protected by the Republic of Serbia.[1]

In 1868, the Serbian National Theatre from Novi Sad (then the capital of Serbian culture in Austria-Hungary) performed in Belgrade (then the capital of the Principality of Serbia). Prince Michael, impressed by the performances he experienced, invited Jovan Đorđević (the founder of the Novi Sad Serbian National Theatre) to found a similar institution in Serbia. Having accepted, Jovan Đorđević came to Belgrade with half of his company of actors and founded the National Theatre in Belgrade, seven years after having founded the Novi Sad theatre. 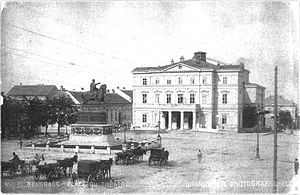 The National Theatre Square in Belgrade, in 1895 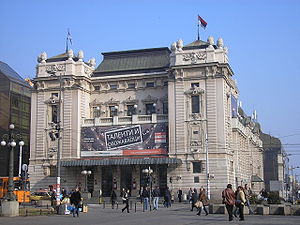 The National Theatre in Belgrade, as it stands today

The National Theatre Belgrade was built in 1869 according to the design of Aleksandar Bugarski, the most productive architect of Belgrade in the 19th century. The decision to construct a special building for the theatre was made by Knez Mihailo Obrenović. The building was a typical theatre building at the time and was particularly reminiscent of La Scala, Milan, with regard to its Renaissance conception and the decorative finish. Later, reconstructions completely changed the original appearance. The heavy reconstruction was made in 1986 when the theatre regained the 1922 look and an annex was built towards Braće Jugovića Street. Beside theatrical purposes, the hall has been used for charity balls and concerts during the 19th century. The Great Constitutional Assembly adopted the famous 1888 Constitution in this building.

During one of the toughest times in Serbian history, which is the 1999 NATO bombing, this theatre was the only one to open its doors to the public during the 78-day air raids. For only 1 dinar, plays were performed to the public.

The activity of Drama of the National Theatre can be viewed as a development in four stages: from 1868 till 1914, from 1918 till 1941, from 1945 until 1991, and from 1991 till today. The first stage is marked by many tragedies and enactments inspired by medieval and modern history, like The Death of Uroš V by Stefan Stefanović. The characteristic of the repertoire of the National Theatre, especially at the end of the 19th century were plays with singing like dramatizations of Stevan Sremac’s popular short stories: Zona Zamfirova and Ivkova Slava.

In the first two decades of the 20th century the broadening of subject matters was noticeable. Beside Branislav Nušić others like Simo Matavulj, Vojislav Jovanović Marambo, Mirabo and Milivoj Predić must be mentioned. Koštana by Borisav Stanković was first shown at the very beginning of the 20th century and it has remained the cult performance of this theatre till this day. In the first stage on the repertoire of the National Theatre were plays written by the most significant writers of all periods: from the earliest (Sophocles), to Shakespeare, Calderon, Molière, Racine, Goldoni, Rostand, Gete, Ibsen, Strindberg, Gogol, Ostrovsky, Chekhov and Gorky. 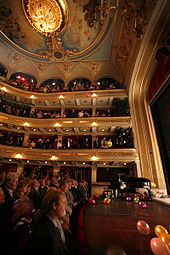 In the period from 1945 till 1953 the plays with clear political message were played. Political changes and certain liberalization characterise the relationship towards the foreign dramaturgy and discovering of the American drama and the works of Jonesco and Becket.

The music ensemble of the National Theatre in Belgrade were trying very hard to become the professional opera ensemble since 1882. As an independent ensemble, the Opera of the National Theatre began its work in 1919. On 11 February 1919, under the leadership of the first music director of the Opera Sector of the National Theatre, Stanislav Binički, a conductor, the opera “Madam Butterfly” by Giacomo Puccini, was performed. The first opera performances were received very favourably, most of them were the operas by Italian composers (Rossini, Verdi), and Serbian music was represented by the works of Stevan Hristić (The sunset), and Petar Konjović (Prince of Zeta). 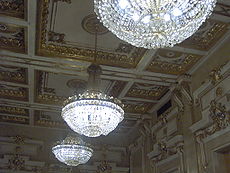 Lobby at the National Theatre

The ten years (1924 until 1933) Stevan Hristić was the director of the Belgrade Opera were marked by expansion of the repertoire and the first tour abroad. Conductors like Lovro Matačić, Ivan Brezovšek, directors Branko Gavela and Josip Kulundžić were quite notable in the period between the two wars. Russian singers prevailed in the ensemble, but there were some very good creations of Serbian singers like Bahrija Nuri-Hadžić, Zdenka Zikova, Melanija Bugarinović and Nikola Cvejić.

After the Second World War, conductor Oskar Danon quickly renewed the activities of the Opera as its general manager. Special attention was dedicated to the domestic opera composers. ‘The golden period’ of the Belgrade Opera is an exceptionally significant period in development and international affirmation of the Serbian operatic art. That period started in 1954 with a very successful performance of “Boris Godunov” by Modest Mussorgsky in Switzerland as a part of a concert cycle “Clubhouse” and recording gramophone records of seven major Russian operas for “Decca”. The culmination of “The golden period” was an outstanding presentation of “Mazzepa” by Peter Ilyich Tchaikovsky on the stage of the “Theater das Westerns” in West Berlin. The most eminent foreign critics pointed out the wholeness of the performance, good teamwork and the beauty of the performing, outstanding soloist creations, acoustic superiority, the homogeneity of the choir and the professional playing of the orchestra of the National Theatre from Belgrade.

Ballet has always been a big part of the National Theatre Belgrade. One of its most important and most watched ballet performances is the Swan Lake. Famous Ukrainian ballet dancer Konstantin Kostjukov is the head of the ballet administration at the National theatre in Belgrade.

The National Theatre Belgrade has 2 halls for performing arts.

The Grand Hall has 3 levels. The ground level has 219 seats in total with the seats at the front being most expensive. There are 3 balconies at the theatre with the first one being the most expensive out of the three.

Large operas, dramas and ballets are played out at the grand hall.

Raša Plaović has 281 seats. It is much smaller and less beautiful then the grand hall. It does not have balconies and minor dramas are played out on stage here.