The clean and jerk is one of the two Olympic weightlifting events (the other being the snatch).

The clean portion of the lift refers to the lifter explosively pulling the weight from the floor to a racked position across deltoids and clavicles. In early twentieth century weightlifting competitions, a variant movement called the "Continental" (because it was practiced by Germans rather than the British) allowed the lifter to pull the barbell up to his belt, where it could rest. Then with several successive flips, the bar would be moved up the torso until it reached the position for the overhead jerk. The Continental gained a reputation as clumsy, slow, and nonathletic compared to the swift coordinated movement required to lift the bar "clean." Hence, the clean movement was adopted by the early weightlifting federations as the official movement. 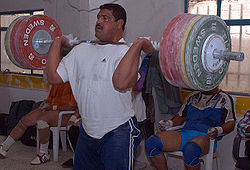 The athlete begins the clean by squatting down to grasp the bar. Hands are positioned approximately a thumb's distance from hips using what is known as a hook grip. The hook grip requires grasping the bar so that the fingers go over the thumb. This makes it much easier for the lifter to maintain his grip on the bar. The lifter's arms are relaxed and just outside the legs with the bar up against the shins. The hips are as low as necessary to grasp the bar, with the feet placed approximately at hip width. Weight is kept on the heels. Toes may be pointed straight ahead or angled out according to the lifters preference. The chest is up and the back is neutral to slightly hyper extended. This is the starting position of the "pull" phase of the lift.

The lifter jumps the bar up through triple extension (in very quick succession) of the hips, knees and then ankles. When the legs have driven the bar as high as possible, the lifter pulls under the bar by violently shrugging (contracting) the trapezius muscles of the upper back ("traps"). This pulls the lifter under the bar and into a deep squat position. The lifter then stands (similar to a front squat) in preparation for the second phase. 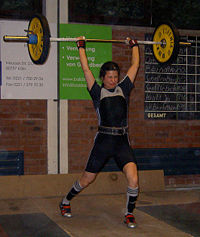 Position after an overhead split jerk.

From the standing position, the lifter bends the knees and then straightens them in order to propel the barbell upwards. The lifter pushes slightly with the arms. This pushes the lifter underneath the barbell. A split jerk is most often used, in which one leg lunges forward while the other moves backward. The lifter must hold the barbell overhead, keep the arms locked, and move the legs directly underneath the torso so that the entire body lines up in a single plane. A push jerk can also be used, in which the lifter keeps both legs in position, bends the knees and jumps into lockout position.

The power clean, a weight training exercise not used in competition, refers to any variant of the clean in which the lifter does not catch the bar in a full squat position (commonly accepted as thighs parallel to the floor or below). The hang clean, another weight training exercise, begins with the barbell off the ground arms hanging down. I.e., any position between the barbell touching the ground and the body fully erect. Both power and hang cleans are considered to be ideal for sports conditioning; as they are both total body exercises, that have been known to increase neuromuscular co-ordination and core stability.

As of the Athens 2004 Summer Olympics, the official world record for the Men's Clean and Jerk is 263.0 kilograms (580 lb). This record was set by Hossein Rezazadeh of Iran.[2]

The former world record in the Clean and Jerk was 266.0 kilograms (586 lb) by Leonid Taranenko of the Soviet Union. However this weight is not considered a world record by the International Weightlifting Federation, since all the old records were annulled after a restructuring of weight classes.[2][3]

The world record for the Women's Clean and Jerk is 187.0 kilograms (412 lb) as of 2009 World Weightlifting Championships. This record was set by Jang Miran of South Korea.[4]