Sleeping Giant (also known as Mount Carmel) of south-central , with a high point of convert|739|ft, is rugged mountain located convert|8|mi|0 north of New Haven. It is part of the narrow, linear that extends from near New Haven, north through the of to the border. A prominent landscape feature visible for miles, the Sleeping Giant receives its name from its anthropomorphic resemblance to a slumbering human figure as seen from both the north and south. The Giant is known for its expansive clifftop vistas, rugged topography, and ecosystems. Most of the Giant is located within . The mountain is a popular recreation resource; over convert|30|mi of trails traverse it including convert|5|mi|0 of the convert|23|mi|adj=on .

The Sleeping Giant, convert|2.75|mi long by convert|1.75|mi wide, is located in Hamden with its eastern edge falling into Wallingford. The Giant's profile features distinct "head", "chin", "chest", "hip", "knee" and "feet" sections topographically represented by traprock outcrops and ridge crests. The highest point is the Left Hip, convert|739|ft|abbr=on, followed by the Chest, convert|710|ft|abbr=on, and the Left Knee and Right Leg, convert|700|ft|abbr=on each, and so on. The Giant's Head, convert|670|ft|abbr=on, is marked by a convert|400|ft|abbr=on cliff. A stone observation tower located on the Left Hip, built by the in the 1930s, offers 360°fact|date=April 2008 views of the surrounding Mill and valleys. An old rock quarry, closed since 1933 and now part of the state park, has left scars on the Giant's Head. The Metacomet Ridge extends west and south from Sleeping Giant as Rocky Top and . The west side of Sleeping Giant drains into the Mill River thence to New Haven Harbor and Long Island Sound; the east side into the , thence to New Haven Harbor and Long Island Sound.

and tilted upward. Subsequent erosion wore away the weaker sedimentary layers a faster rate than the basalt layers, leaving the abruptly tilted edges of the basalt sheets exposed, creating the distinct linear ridge and dramatic cliff faces visible today. One way to imagine this is to picture a layer cake tilted slightly up with some of the frosting (the sedimentary layer) removed in between. [Raymo, Chet and Maureen E. "Written in Stone: A Geologic History of the Northeastern United States". Globe Pequot, Chester, Connecticut, 1989.]

block sunlight, creating damp, cooler growing conditions with associated cooler climate plant species. Talus slopes are especially rich in nutrients and support a number of calcium-loving plants uncommon in eastern Connecticut. Because the ridge generates such varied terrain, it is the home of several plant and animal species that are state-listed or globally rare. [ [http://www.connix.com/~harry/twep.htm The Traprock Wilderness Recovery Strategy] . Cited Dec. 13, 2007] 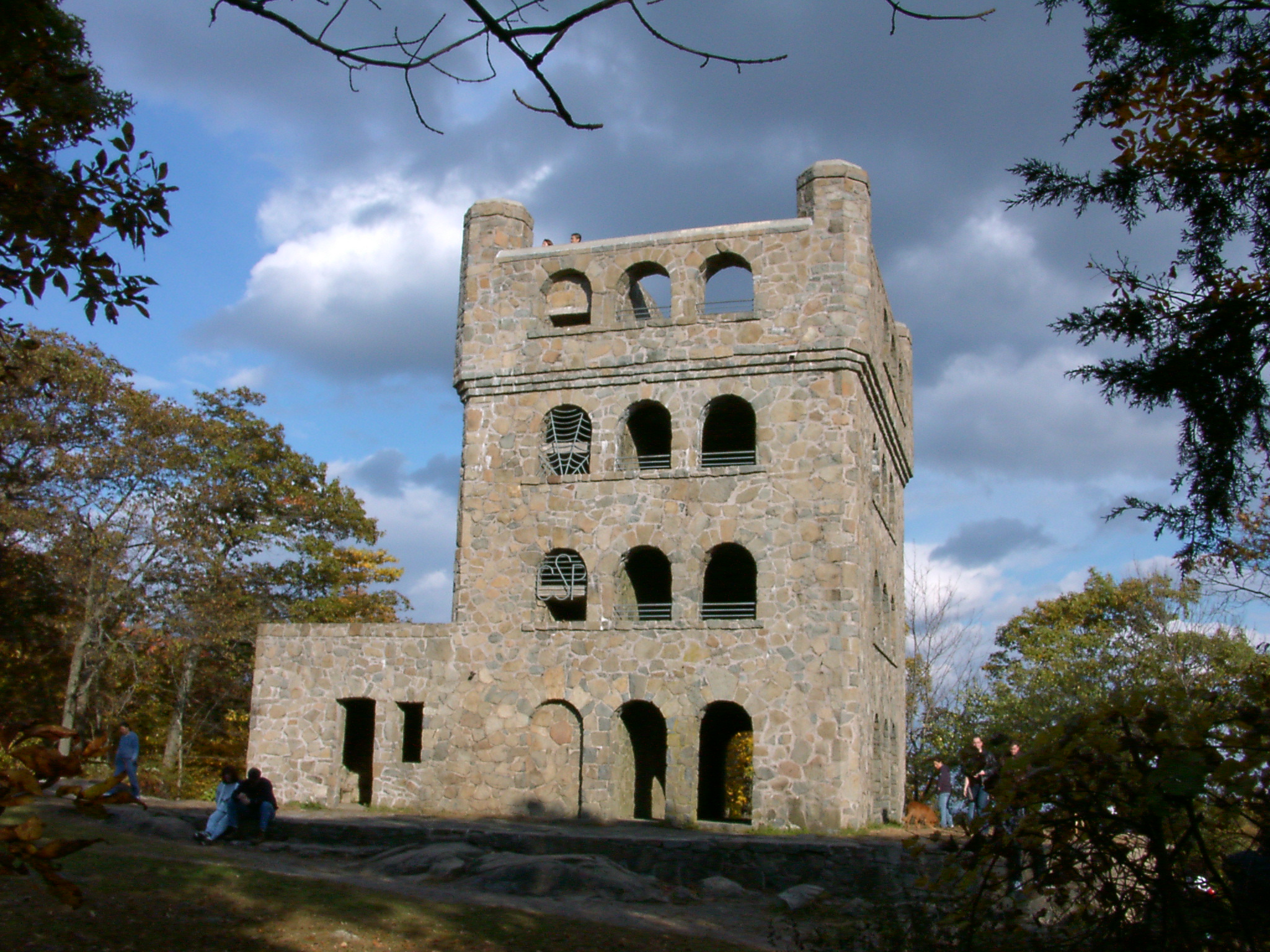 According to Native Americans of the Quinnipiac Tribe, the giant stone spirit Hobbomock (or Hobomock), a prominent wicked figure in many stories (see and ), became enraged about the mistreatment of his people and stamped his foot down in anger, diverting the course of the (where the river suddenly swings east in after several hundred miles of running due south). To prevent him from wreaking such havoc in the future, the good spirit Keitan cast a spell on Hobbomock to sleep forever as the prominent man-like form of the Sleeping Giant.

During the mid-1800s, spurred by the painters of the and philosophers such as and , an interest in mountains as a respite from and took hold in New England. Summer cottages were built on the Sleeping Giant and many other locations on the Metacomet Ridge. In 1888, John H. Dickerman built a road on the Giant and opened what he called "Blue Hills Park." He held picnics with ice cream on the ledges for local residents. Conservation of the Giant began in 1924 with the creation of the Sleeping Giant Park Association (SGPA) by a group of local residents concerned with ongoing traprock quarrying on the Giant's head. A cottage owner, Judge Willis Cook, had leased his property to the Mount Carmel Traprock Company for the purpose of quarrying traprock for building materials. The blasting away of what was a beloved landscape feature resulted in public outrage, well reported by local newspapers at the time. Under the leadership of James W. Toumey, a forestry professor, the SGPA undertook a ten year struggle with the traprock operation. The property was purchased by the SGPA in 1933, during the Great Depression, for $30,000; the money was raised through private donations and the property became the Sleeping Giant State Park. A complete history of the Giant has been published in Nancy Davis Sachse's book "Born Among the Hills – The Sleeping Giant Story."

The Sleeping Giant Tower was built at the top in 1936 by the Works Progress Administration. It was listed on the in 1986 as part of the Connecticut State Park and Forest Depression-Era Federal Work Relief Programs Structures.

Sleeping Giant is a popular outdoor recreation destination among residents and visitors of the greater New Haven region. The clifftops offer long views of much of New Haven County and some of Hartford County over more than 270 degrees of the compass, and (atmospheric conditions permitting) across Long Island Sound to the Shoreham area on .

Sleeping Giant is open until sunset year-round; parking inside the main entrance, on weekends or holidays during roughly the summer costs $4 to $10 for most who have not bought the $50 statewide annual pass, [ [http://www.ct.gov/dep/cwp/view.asp?a=2716&q=325082&depNav_GID=1650&depNav= Department of Environmental Protection: Parking and Camping Fees - CT State Parks and Forests] ] but other parking is nearby outside the park, or at trailheads further east or north. Activities permitted on the Giant include , , , , and other passive pursuits. Trails specifically designed for and are located on the lower reaches of the Giant, and is allowed in the abutting Mill River. , closed for several decades on the Giant because of accidents, was permitted as of 2007; the Ragged Mountain Foundation, a non-profit rock climbing group, advises climbers to "please observe [state] park regulations." [ [http://www.raggedmtn.org/pn/index.php?module=ContentExpress&file=index&func=display&ceid=19&meid=13 Ragged Mountain Foundation.] Cited Dec. 26, 2007.] Youth only is allowed on the Giant (by permit). Seasonal facilities include restrooms, a picnic shelter, and picnic tables. The convert|23|mi|adj=on —the oldest trail in the convert|700|mi|adj=on blue blazed trail system managed by the &mdash;traverses the length of the Giant from the Quinnipiac River west over the Giant's high points to the Mill River then continues north over and Mount Sanford. [ [http://www.ct.gov/dep/cwp/view.asp?a=2716&q=325264&depNav_GID=1650 Sleeping Giant State Park.] Connecticut Department of Environmental Protection. Cited Dec. 25, 2007]

Most, but not all, of the Sleeping Giant has been conserved. The trails and facilities on Sleeping Giant are collaboratively maintained by the Sleeping Giant Park Association and the State of Connecticut, with the bulk of the trail maintenance done by the association. Sleeping Giant State Park encompasses 1500 acres; the SGPA remains active in securing additional parcels to add to the property. The SGPA has also been instrumental in defeating attempts to log the Giant, build communications towers on its summits, and close the state park altogether. SPGA runs a regular recreational and interpretive hikes on the Giant and volunteer trail maintenance programs. The Connecticut Forest and Park Association also has a working investment in the conservation of the Giant and trail building on it. [ [http://www.ctwoodlands.org/ Connecticut Forest and Park Association] . Cited Dec. 25, 2007.]

In 1948, the children's author published the collection "Sleeping Giant and Other Stories". In the title story, the Sleeping Giant decides to get up and leave.