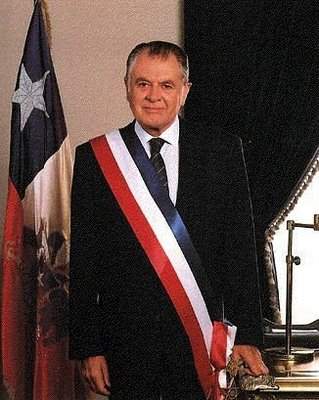 Patricio Aylwin Azócar (born , ) was the first of after its return to democratic rule in 1990, following the military government of General .

Aylwin was born in , to Miguel Aylwin and Laura Azócar, the eldest of five children. An excellent student, he enrolled in the Law School of the where he became a lawyer, with the highest distinction, in 1943. He served as professor of administrative law, first at the and then also at the . He was also professor of civic education and political economy at the National Institute.

He is married to Leonor Oyarzun Ivanovic. They have five children (his daughter Mariana worked as a minister in subsequent governments) and 14 grandchildren (among them, popular actress Paz Bascuñán).

Patricio Aylwin’s involvement in politics started in 1945, when he joined the Nacional. Later he was elected president of the Falange and when that party became the Christian Democrats, he served seven terms as its president between 1958 and 1989.

In 1965 he was elected to the National Congress as a . In 1971, he became the president of the Senate. During the government of , headed by , he was also the president of his party, and he led the democratic opposition to within and without Congress. He is credited, to some degree, with trying to find a peaceful solution to the country’s political crisis. Nonetheless, in 1973, only a week before the , he signed a congressional act asking the military to "help reestablish the rule of law". This document, little noticed at the time, was later used as the main excuse for the uprising of the normally apolitical Chilean military.

Aylwin was president of the Christian Democrats until 1976, and after the death of the natural leader of the party, , in 1982, he led his party during one of the most difficult eras in Chilean history. Later he helped establish the Constitutional Studies Group of 24 to reunite the country's democratic sectors against the dictatorship. In 1979 he served as a spokesman in the group that opposed the plebiscite that approved a new constitution.

In 1982 Aylwin was elected vice president of the Christian Democrats. He was among the first to advocate acceptance of the Constitution as a reality in order to facilitate the return to democracy. The opposition eventually met the legal standards imposed by the Pinochet regime and participated in the 1988 plebiscite.

In October 1988, Chileans voted in a presidential referendum to end General Pinochet's bid for 8 more years as president. Patricio Aylwin was at the center of the movement that defeated General Pinochet. After the plebiscite, he participated in negotiations that led the government and the opposition to agree on 54 constitutional reforms, thereby making possible a peaceful transition from 16 years of dictatorship to democracy.

Patricio Aylwin was elected president of the Republic on December 14, 1989.

He led the reconstruction of Chile and the reconciliation of its people. Although Chile had officially become a democracy, the Chilean military remained highly powerful during the presidency of Aylwin, and the Constitution ensured the continued influence of Pinochet and his commanders. This prevented his government from achieving many of the goals it had set out to achieve, such as the restructuring of the Constitutional Court and the reduction of Pinochet's political power. His administration did initiate direct municipal elections, the first of which were held in June 1992. In spite of the severe limits imposed on Aylwin's government by the Constitution, over four years it "altered power relations in its favor in the state, in civil society, and in political society." [Linz, Juan J. & Stepan, Alfred. "Problems of Democratic Transition and Consolidation". Johns Hopkins University Press, 1996.]

Since leaving office in 1994, he has continued his lifelong commitment to promoting justice. In 1995, he was the catalyst for a United Nations summit on poverty. He is now president of the Corporation for Democracy and Justice, a non-profit organization he founded to develop approaches to eliminating poverty and to strengthen ethical values in politics.

Aylwin has received honorary degrees from universities in Australia, Canada, Colombia, France, Italy, Japan, Portugal, Spain, the United States, and from seven Chilean universities. In 1997 the awarded the to Aylwin and , former president of Ireland, for their contributions to fostering human rights, democracy, and cooperation between Europe and Latin America. [cite web |title=The North South Prize of Lisbon
work=North-South Centre |publisher=Council of Europe |url=http://www.coe.int/t/e/north%2Dsouth_centre/programmes/7_north%2Dsouth_prize/winners_PNS.asp
accessdate=2008-01-21 ]

In 1998 he received the J. William Fulbright Prize for International Understanding.

He is a member of the . [ [http://www.clubmadrid.org Home - Club of Madrid - Democracy that Delivers ] ]