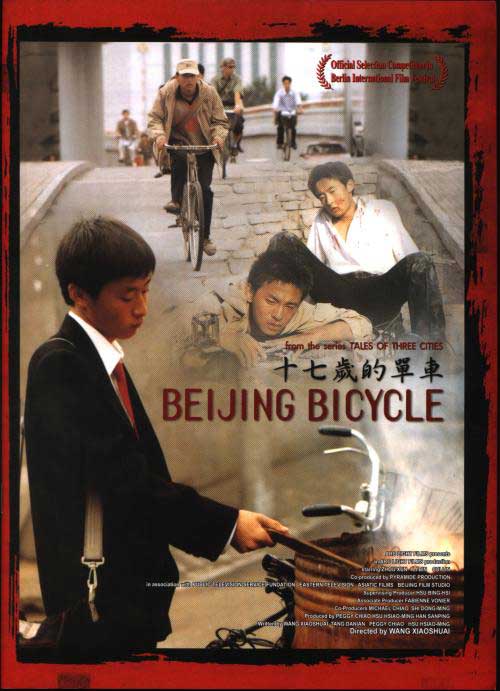 "Beijing Bicycle" (zh-stpl|s=十七岁的单车|t=十七歲的單車|p=Shí qī suì de dān chē|l=seventeen-year-old's bicycle) is a 2001 Chinese drama by Sixth Generation Chinese director , with joint investment from the ese and the French . The film stars first-time actors and Li Bin, supported by the already established actresses and . It premiered at the on , , but was subsequently banned in . The ban was eventually lifted in .

"Beijing Bicycle" revolves around a seventeen-year-old boy Guei (Cui) from the countryside who came to to seek work. He finds a job with a courier company, which assigns him a brand-new bicycle. After it is stolen one day, the stubborn Guei goes on a search for his missing bicycle. At the other end of the city, Jian (Li) is a schoolboy who buys Guei's stolen bicycle from a second-hand market. When Guei's search brings the two boys together, more than the ownership of the bicycle is brought into question. The film explores the theme of youth as well as several social issues, including class, youth delinquency, theft, and rural-urban socio-economic divisions and change.

Guei (played by ) is a seventeen-year-old country boy who came to to make a living. [Full name is Guo Liangui, if written in without tone marks. In the English subtitles "Guei" is used instead.] Along with a number of other boys from the country, Guei finds employment with a courier company, which assigns them brand-new bicycles for use in their deliveries. The company manager () announces to them that since the bicycles do not yet belong to them, they will only earn twenty percent of the commission. But once they have made enough deliveries to earn the bicycles, their share will be raised to fifty percent. Within two months Guei has made enough to earn his bicycle. However, on the day that Guei is due to take over the ownership, the bicycle is stolen while he is picking up a document. The manager fires Guei but, upon the latter's pleas, agree to take him back if he succeeds in retrieving his bicycle—a virtually impossible task.

At the other end of the city, Jian (Li Bin) is a seventeen-year-old schoolboy who longs for a bicycle of his own so he can ride with Xiao (), the girl he fancies. [Name given in dialogue is Xiaoxiao.] His hopes are dashed when his father () delays buying a bicycle for him yet again because his step-sister Rong Rong's () school fees are due. The frustrated Jian then steals some money from his family and pays 500 yuan to a second-hand dealer for a bicycle—the one that used to belong to Guei.

Meanwhile, the stubborn Guei embarks on a search for his bicycle. By chance, his friend and landlord Mantis () spots Jian with the bicycle. Guei tries to make off with the bicycle but is stopped by Jian and his gang of schoolboys. The determined Guei follows Jian home and steals back the bicycle from where Jian hides it. The manager keeps his promise and takes Guei back. However, when Guei shows up at the courier company one day, he finds Jian and his gang waiting for him. He tries to escape but the gang chases him down and, after giving him a beating, forcibly takes the bicycle.

When Jian returns home, he finds his father waiting for him at the door, along with Guei. Thinking that his son was the bicycle thief, the enraged father gives Jian a rapping and lets Guei take his bicycle away. However, Jian and his gang tracks down Guei again the next day and after long hours of negotiation, the two sides reach a pact: Guei and Jian are to share the bicycle, each entitled to the use of it for half a day. This arrangement persists for some days when Jian finds out that Xiao has fallen for Da Huan (Li Shuang), a bicycle freestylist. After Da Huan taunts him, the affronted Jian smashes his rival with a block of brick and rides off.

At their usual meeting place, Jian hands the bicycle to Guei and tells the latter that he does not need it anymore. Meanwhile, Da Huan comes to and, along with his gang, comes for Jian. Jian and Guei make off together but are cornered by Da Huan and his gang, who give both of them a serious beating. As the gang leaves, one member stays behind to mutilate Guei's bicycle. In a rare burst of rage, Guei picks up a block of brick and smashes the head of his assaulter, who collapses in a pool of blood. Carrying his wrecked bicycle on his shoulder, Guei walks home alone.

The film board of the Chinese decided to ban the screening of "Beijing Bicycle" in China after the film was sent to the Berlin International Film Festival without first acquiring the board's approval. According to director , he did submit the film for examination and the film board gave some suggestions for revision. However, he abandoned the efforts for a license, fearing that the revision process would not finish in time for the festival. The ban was eventually lifted in , with eight modifications to the film and a truncated title of "Bicycle".

According to Elizabeth Wright of "", the juxtaposition of Guei and Jian, in particular their contrasting relation to the bicycle, highlights their differences in social standing and status. Guei is a new migrant who has come to the city with hopes for better income. On the other hand, Jian comes from an upwardly motivated city family concerned with providing the children with good education. The bicycle grants Jian status among his peers and impresses Xiao, the girl he fancies. To Guei, the bicycle, besides being a tool of the trade, is also a symbol of status and pride. It symbolises his participation and success in the city and makes him less of an outsider. Director depicts both the new face of 's youth through Jian and alludes to the disillusion of immigrants from the country through Guei.

In a secondary plot, Guei and Mantis spend their free time observing Qin, a young attractive girl living in a large house and owning a large number of clothes. They believe Qin is a rich city girl but notice that she does not seem happy or content with her material possession. Later, they find out that Qin is in fact a maid, also from the country, who likes to dress herself in her employer's clothes when she is home alone. According to Wright, Guei and Mantis's misconception of the Qin's social status is "an obvious indictment on the beguiling nature of surface images and material possessions".

"Beijing Bicycle" was released on on , and distributed by in the . The DVD features subtitles in English.