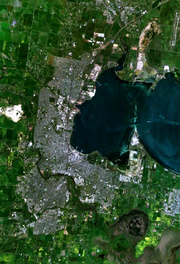 Corio Bay is one of numerous bays in the southwest corner of Australia's Port Phillip, and is the bay on which abuts the City of Geelong. The nearby suburb of Corio takes its name from Corio Bay.

When Hamilton Hume and William Hovell arrived at the bay in 1824 they met with the local Wautharong people who referred to the bay as "Jillong" and the surround land "Corayo", but by the time the area was surveyed in the late 1830s the Aboriginal names had been swapped.[1] The names "Corayo" and "Jillong" had since been Anglicised to "Corio" and "Geelong".

The Port of Geelong is located on the shores of Corio Bay, and is the sixth largest port in Australia by tonnage.[2]

Before the initial settlement of Geelong, a sandbar across the bay from Point Lillias to Point Henry prevented ships from entering the inner harbour. Ships were required to drop anchor in the bay, and cargo was brought into Geelong on small barges. At times it was possible to walk across the bay on the sandbar at low tide.[3]

The first channel through the sandbar was started in 1853, providing less than 4 metres draught for ships. This channel was straightened out and dredged at a depth of 6 metres in the 1860s. In 1881 a new channel started that took 12 years to complete. It was named the Hopetoun Channel after Lord Hopetoun who opened it on December 20, 1893.[4]

Management of the channels and port was the responsibility of the Geelong Harbour Trust that was formed in December 1905. In 1981, the Port of Geelong Authority took over from the trust. The authority was privatised by the State Government in mid 1996, being sold to TNT Logistics for $49.6 million.[5] It was later re-branded as 'GeelongPort'.

The shores of Corio Bay have been a popular playground for Geelong residents. Since the 1930s Eastern Beach has been a popular swimming location. Boating is also popular, with a number of public boat ramps and piers provided. The bay is also the home of the Royal Geelong Yacht Club that was established in 1859, and the adjacent Bay City Marina that was constructed in the 1980s.