The choroid, also known as the choroidea or choroid coat, is the vascular layer of the eye, containing connective tissue, and lying between the retina and the sclera. The human choroid is thickest at the far extreme rear of the eye (at 0.2 mm), while in the outlying areas it narrows to 0.1 mm.[1] The choroid provides oxygen and nourishment to the outer layers of the retina. Along with the ciliary body and iris, the choroid forms the uveal tract.

The structure of the choroid is generally divided into four layers:

There are two hundred circulations of the eye: the retinal and uveal, supplied in humans by posterior ciliary arteries, originating from the ophthalmic artery. The arteries of the uveal circulation, supplying the uvea and outer and middle layers of the retina, are branches of the ophthalmic artery and enter the eyeball without passing with the optic nerve. The retinal circulation, on the other hand, derives its circulation from the central retinal artery, also a branch of the ophthalmic artery, but passing in conjunction with the optic nerve.[2] They are branching in a segmental distribution to the end arterioles and not anastomoses. This is clinically significant for diseases affecting choroidal blood supply. The macula responsible for central vision and the anterior part of the optic nerve are dependent on choroidal blood supply.[3]

Teleosts bear a body of capillary adjacent to the optic nerve called the choroidal gland. Though its function is not known, it is believed to be a supplemental oxygen carrier.[4] 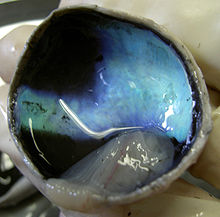 Calf's eye dissected to expose the choroid: its tapetum lucidum is iridescent blue

Melanin, a darkly colored pigment, helps the choroid limit uncontrolled reflection within the eye that would potentially result in the perception of confusing images. In humans and most other primates, melanin occurs throughout the choroid. In albino humans, frequently melanin is absent and vision is low. In many animals, however, the partial absence of melanin contributes to superior night vision. In these animals, melanin is absent from a section of the choroid and within that section a layer of highly reflective tissue, the tapetum lucidum, helps to collect light by reflecting it in a controlled manner. The uncontrolled reflection of light from dark choroid produces the photographic red-eye effect on photos, whereas the controlled reflection of light from the tapetum lucidum produces eyeshine (see Tapetum lucidum).