How to Save a Life (song)

How to Save a Life (song)

Infobox Single
Name = How to Save a Life 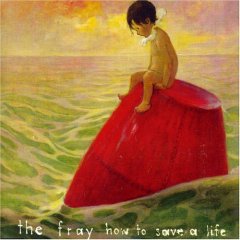 "How to Save a Life" is an by -based . It is the from their debut album, "". It was the follow-up single to the top 10 hit "" and peaked in the top 3 of the "Billboard" chart in the . It became the joint sixth longest charting single on the Billboard Hot 100, tying with Santana's "Smooth" (1999), at 58 consecutive weeks. The song has sold over 2,000,000 s, and has been certified 2x Platinum by the RIAA. It is the band's highest-charting song to date, topping the chart for 15 consecutive weeks and topping the Canadian Airplay Chart. The single is backed with a live version performed in a studio. It was also nominated for a in 2007. It lost to "" by .

The song is the band's first to achieve significant popularity outside of the United States. "How to Save a Life" was a top five hit in , , , and the . Due to an early leak by in the United Kingdom, where it was the band's debut single, the song was released in that country five weeks earlier than planned and peaked at #4, but still ended 2007 as the year's eleventh biggest-selling single in the country. [. [http://www.bbc.co.uk/radio1/chart/singles2007.shtml "Top 40 Singles of the Year 2007 "] . Retrieved ]

According to and , the song was composed and influenced by his experience while working as a mentor at a camp for troubled teens:

Slade claims that the song is about all of the people that tried to reach out to the boy but were unsuccessful. As Slade says in an interview, the boy's friends and family approached him by saying, "Quit [the problem behavior] or I won't talk to you again," but all he needed was some support. The verses of the song describe an attempt by an adult to confront a troubled teen. In the chorus, the singer laments that he himself was unable to save a friend because he did not know how.

While this was the original intent of the song, the band has opened the song to interpretation. They created a [http://www.howtosavealife.com/ website] where fans were welcome to submit music videos they had made for the song. This arose from the response that Slade got from the song: [cite web|url=http://www.usatoday.com/life/music/news/2006-07-12-otv-the-fray_x.htm|publisher=USA Today|title=Debut 'How to Save a Life' takes on a life of its own|date=, ]

The song was first featured on ABC's "Grey's Anatomy", after , the music supervisor for the show, saw the band perform in Los Angeles. She was impressed with their performance, particularly with the song "How to Save a Life". Alexandra then incorporated the song into "Superstition", an episode of the show's second season (first aired on , ). After its usage in the episode, the song became a minor Hot 100 hit. The song became an "unofficial theme" for the other members of the "Grey's Anatomy" production after the episode aired, leading to the decision that the song would be used in the main promotion for the third season in the show. [cite web|url=http://www.nypost.com/seven/09242006/tv/how_greys_got_that_catchy_new_theme_song_tv_paige_albiniak.htm|publisher=New York Post|title=How 'Grey's' got that catchy new "theme" song|date=, ]

The song was then featured on 's comedy medical series "Scrubs", towards the end of the popular episode "" on , , when three patients die from rabies contracted through organ transplants. () feels that it is through his oversight that the deaths occur, and subsequently, he emotionally collapses, and walks out of the hospital mid-shift.

One week after the promotion for "Grey's Anatomy"'s third season began to air, "How to Save a Life" advanced from position #51 to position #29 on the Hot 100. As the promotion played, the song continued to climb on the charts, reaching a peak position of #3 in the "Billboard" issue marked , . On , , a "Grey's Anatomy" version of the music video (similar to the one made for 's "") was shown prior to the third season premiere of the show. The song was also released as one of the tracks on the "Grey's Anatomy, Vol. 2" album, and would later be used in the trailer for the Australian release of the show.

In addition to "Grey's Anatomy" and "Scrubs", the song has been aired in episodes of "One Tree Hill", "", "", "The Hills", "", "" and in the for the final episode of "", the encore episode of "Echo Beach" and in trailers of series 22 "Casualty". used the song for its "Summer Image" television campaign, and it was also used in the trailer for the film "".

During the season preview for the new show "A Shot at Love", "How to Save a Life" plays as the backdrop music.

The melody to the song was also parodied in a popular video called "PS3 Song: How to Kill a Brand" which blasted Sony for several missteps that ultimately led to the lagging behind both the and . [ [http://www.youtube.com/watch?v=R98qC0fd_1w YouTube - PS3 Song ] ] . This parody inspired a similar song highlighting the faults of the Xbox 360 being made to the tune of .

Another parody was created, under the title "How to Kill Your Wife".

Bryan Preston, a former lead blogger at conservative website HotAir.com, reworked the lyrics to address terrorism carried out by Islamic radicals. Retitled "How to Take a Life", Preston made a video of the song, himself singing the lyrics while noted conservative pundit Michelle Malkin played the piano. The video juxtaposed images and video of radical Islamic leaders speaking and clips from terrorist training videos and camps. [ [http://hotair.com/archives/2007/06/13/new-vent-how-to-take-a-life/ "How to Take a Life - Redone with lyrics concerning Islamic terrorism.] ]

1.) The original music video, which premiered on on , , featured the recurring themes of light and stopped time. This music video shows the scene of a car crash and all of its presumed victims in pause. There is a recurring light throughout the video shining brightly in the dark woods that the video takes place in. Scenes of the band playing in a dark warehouse are intercut with the story going on outside. This version of the video was placed at #21 of the year by VH1's "Top 40 Videos of 2006".vvd

2.) Another version of the music video juxtaposes scenes from "" to scenes of the original music video. However, all the scenes of the presumed car crash victims are excluded and only scenes of The Fray playing in a warehouse are shown.

3.) A third music video was released for the song on , . It was directed by , who is known for his work on the "Jeremy" music video among others. The video features various different kids, most of which seem to be between 12-18 in age, all who appear to be depressed and suicidal, or possibly mourning the loss of a loved one. All of these children have lost a significant loved one prior to the video. Many of the kids cry and scream in the video, all against a white background. Scenes of the band playing the song against this same white background are also shown throughout the video. Many numbered steps are shown alongside the kids, such as "Remember", "Cry", or "Let It Go". The video ends with each child seeming to find a . This version of the video debuted on 's at #9, and has since gone on to top the countdown at #1 on , , becoming the band's first TRL #1, and also becoming the last #1 video on TRL for 2006.

4.) A fourth video takes the form of a slideshow composed of images of the with the song played over it.

5.) A fifth one featuring aftermath in New Orleans with the song played over it.

International Suicide Prevention a 501(c)(3) public charity adopted the song "How to Save A Life", as its official theme song in 2008. http://www.supportisp.org