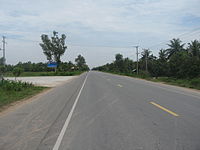 A rural road in Cambodia

War and continuing fighting severely damaged Cambodia's transportation system — a system that had been inadequately developed in peacetime. The country's weak infrastructure hindered emergency relief efforts and created tremendous problems of procurement of supplies in general and of distribution. Cambodia received Soviet technical assistance and equipment to support the maintenance of the transportation network.

After decades of neglect and damage from wartime, Cambodia's rail network is currently being reconstructed as part of the Trans-Asian Railway project with modern trains replacing the current open-access system of "bamboo trains", homemade bamboo mats powered by go-kart or water pump engines.[1] Two rail lines exist, both originating in Phnom Penh and totaling about 612 kilometers of metre gauge single track. A third line is planned to connect Phnom Penh with Vietnam,[1] the last missing link of the planned rail corridor between Singapore and the city of Kunming, China. 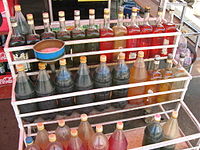 Bottles of gasoline in Battambang

Of the current total, only about 50 percent of the roads and highways were covered with asphalt and were in good condition; about 50 percent of the roads were made of crushed stone, gravel, or improved earth; and the remaining approximately 30 percent were unimproved earth or were little more than tracks. In 1981 Cambodia opened a newly repaired section of National Route 1 which runs southeast from Phnom Penh to the Vietnamese border. The road, which suffered damage during the war years, was restored most probably by Vietnamese army engineers. In the late 1980s, Cambodia's road network was both underutilized and unable to meet even the modest demands placed upon it by an unindustrialized and agriculture society (see fig. 8.). Commercial vehicles, such as trucks and buses, were insufficient in number and lacked the spare parts necessary to keep them running. Road construction and maintenance were ignored by a financially hard-pressed government, while insurgents regularly destroyed bridges and rendered some routes unsafe for travel.

Cambodia is upgrading the main highways to international standards and most are vastly improved from 2006. Most main roads are now paved. And now road construction is on going from the Thailand border at Poipet to Siem Reap (Angkor Wat).

The nation's extensive inland waterways were important historically in domestic trade. The Mekong and the Tonle Sap Rivers, their numerous tributaries, and the Tonle Sap provided avenues of considerable length, including 3,700 kilometers navigable all year by craft drawing 0.6 meters and another 282 kilometers navigable to craft drawing 1.8 meters. In some areas, especially west of the Mekong River and north of the Tonle Sap River, the villages were completely dependent on waterways for communications. Launches, junks, or barges transport passengers, rice, and other food in the absence of roads and railways. 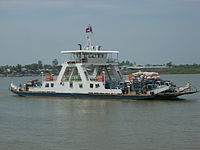 Cambodia has two major ports, Phnom Penh Port and Sihanoukville Port, also known as Kampong Som, and five minor ones. Phnom Penh, located at the junction of the Bassac, the Mekong, and the Tonle Sap rivers, is the only river port capable of receiving 8,000-ton ships during the wet season and 5,000-ton ships during the dry season. It remains an important port for international commerce as well as for domestic communications.

Sihanoukville port reopened in late 1979. It had been built in 1960 with French assistance. In 1980 some 180 Soviet dockworkers, having brought with them forklifts and trucks, were reportedly working at Kampong Som as longshoremen or as instructors of unskilled Cambodian port workers. By 1984 approximately 1,500 Cambodian port workers were handling 2,500 tons of cargo per day. According to official statistics, Sihanoukville had handled only 769,500 tons in the four prior years (1979 to 1983), a level that contrasted sharply with the port's peacetime capacity of about 1 million tons of cargo per year. 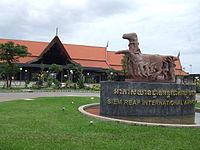 The country possesses twenty-six airfields, of which only thirteen were usable in the mid-1980s. Eight airfields had permanent-surface runways. Phnom Penh International Airport in Phnom Penh is the largest airport; it also serves as the main base for the renascent Cambodian Air Force.

The new national airline Cambodia Angkor Air was launched in 2009, with a large financial investment from Vietnam Airlines.