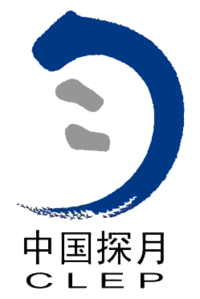 Insignia of the program.

Chinese Lunar Exploration Program (CLEP) (simplified Chinese: 中国探月; traditional Chinese: 中國探月; pinyin: Zhōngguó Tànyuè), also known as the Chang'e program, is a program of robotic and human missions to the Moon undertaken by the China National Space Administration (CNSA), the space agency of the People's Republic of China. The program makes use of the Chang'e lunar orbiters, lunar rovers and sample return spacecraft, launched on adapted Long March 3A, Long March 5/E and Long March 7 launch vehicles. Launches and flights are monitored constantly by a Telemetry, Tracking and Command (TT&C) system, which uses 50-m radio antennas in Beijing and 40-m antennas in Kunming, Shanghai and Ürümqi to form a 3,000-km VLBI antenna.[1][2] A proprietary ground application system is responsible for downlink data reception.

Ouyang Ziyuan, a prominent Chinese geologist and cosmochemist, was among the first to advocate the exploitation not only of known lunar reserves of metals such as iron, but also of lunar helium-3, an ideal fuel for future nuclear fusion power plants. Ziyuan, one of the strongest supporters of the Chinese human lunar exploration program, is currently serving as the chief scientist of the program. Another prominent Chinese scientist, Sun Jiadong, was assigned as the general designer, while a younger scientist, Sun Zezhou (孙泽州) was assigned as the deputy general designer. The current leading program manager is Luan Enjie (栾恩杰).

The first spacecraft of the program, the unmanned lunar orbiter Chang'e 1, was successfully launched from Xichang Satellite Launch Center on October 24, 2007,[3] having been delayed from the initial planned date of 17–19 April 2007.[4] A second unmanned orbiter, Chang'e 2, was launched successfully on October 1, 2010.[5][6] Chang'e 3, China's first lunar rover, is expected to launch in 2013.

According to CNSA, the program will be divided into three main operational phases:

The first phase of the exploration program entailed the launch of two lunar orbiters, and is now effectively complete.

In the second phase of the lunar exploration program, two lunar landers will be launched to deploy Moon rovers for surface exploration in a limited area. These missions were originally planned for 2012, requiring the use of the CZ-5/E heavy launch vehicle.

Currently, the second and third phases of the program will both require the availability of the heavy-lift Long March 5 (CZ-5) booster. Huang Chunping, the former head of rocket science for China's manned space program, told Xinhua news agency in March 2007 that the Long March 5 (CZ-5) rocket would be ready for launch 'in seven or eight years', which implied that CZ-5 would not be used in the second phase of the Chang'e program. The Hainan Spaceport, China's fourth and southernmost space center, will be upgraded to suit the new CZ-5 Heavy ELV. It has, however, been reported that the second phase might use a CZ-3B rocket instead.[citation needed]

It has been reported that the second phase of the program would include the launch of at least two landers,[7][8] carrying small remote-controlled rovers to conduct an inspection of the Moon's surface and probe its resources. The rovers would also provide data to determine the selection of a site for a manned Moon base.

On December 14, 2005, many aspects of the above information were confirmed, when it was reported that "an effort to launch lunar orbiting satellites will be supplanted in 2007 by a program aimed at accomplishing an unmanned lunar landing. A program to return unmanned space vehicles from the Moon will begin in 2012 and last for five years, until the manned program gets underway" in 2017.[9]

A six-wheeled lunar vehicle has been under development since 2002 at the Shanghai Aerospace System Engineering Institute, where a specialized testing laboratory has been outfitted to replicate the lunar surface.[10][11] The 1.5-meter high, 200-kilogram rover is designed to transmit video in real time, dig into the lunar surface and analyze soil samples. With an average speed of 100 meters/hour, it can negotiate inclines and has automatic sensors to prevent it from crashing into other objects.

In late 2008, Chen Qiufa, the Deputy Minister of the MIIT and head of SASTIND, indicated that the Chang’e 3 Lunar Rover would launch in late 2011 on a Long March 3B rocket. The rover will conduct studies of the Moon’s geology, topography, and mineral and chemical composition.[12]

In 2009, the 2013 launch date was confirmed for a landing craft and rover called Chang'e-3. The lander will use variable thrusters to make a vertical landing on the surface near the Moon's equatorial region. The lunar rover will leave Chang'e-3 and work on the surface for three months. Energy will be provided by radioisotope thermoelectric generator, so that the rover can operate through lunar nights.[13]

The third phase of the lunar exploration program is planned for 2017, entailing the use of the CZ-5/E heavy launch vehicle. On the basis of the lander mission, a lunar sample return mission will be undertaken, with up to two kilograms of lunar samples being returned to Earth.

Given the conditions of the three-body system of the Earth, the Moon and a lunar satellite, the orbit design of lunar exploration satellites is more complicated than that of Earth-orbiting satellites, which only deal with a two-body system. The Chang'e 1 and Chang'e 2 lunar satellites were sent into the highly elliptical Earth orbits; after separating from their launch vehicles, they entered an Earth-Moon transfer orbit through three accelerations in the phase-modulated orbit. These accelerations were conducted 16, 24, and 48 hours into the mission by each satellite's own propulsion system, during which several orbit adjustments and attitude maneuvers were carried out so as to ensure the satellites' capture by lunar gravity. After operating in the Earth-Moon orbit for 4–5 days, each satellite entered a lunar acquisition orbit. Having entered their target orbits, Chang'e 1 and Chang'e 2 carried out their pre-designed missions after conducting three brakings and experiencing three different orbit phases.

During lunar orbit, the satellites always had to be oriented towards the Earth, the Moon and the Sun. All onboard detectors had to be kept facing the lunar surface to complete their scientific exploration missions, while the transmitting/receiving antennas had to be facing the Earth to receive commands and transfer scientific data. Each satellite's solar panels, meanwhile, had to be oriented towards the Sun to acquire power for normal operation. During lunar orbit, the three bodies of the Earth, the Moon and the Sun rotate relatively, so attitude control was a complex three-vector control process, with the Chang'e satellites having to adjust their attitude carefully to maintain an optimal angle towards all three bodies.

The complexity of the space environment encountered during the Chang'e missions led to higher requirements for environmental adaptability and reliability for the satellites and their instruments. The high-radiation environment in Earth-Moon space required hardened electronics to prevent electromagnetic damage to satellite instruments. Additionally, the great degree of temperature range - from 130℃ on the side of the satellite facing the sun to -170℃ on the side facing away from the sun - imposed strict requirements for temperature control in the design of the detectors.

The biggest challenge in Phase I of the Lunar Exploration Program was the operation of the Telemetry, Tracking and Command (TT&C) system, because its transmission capability had to have sufficient range to contact spacecraft in lunar orbit. China's standard satellite telemetry had a range of as much as 80,000 km, but the distance between the Moon and the Earth can exceed 400,000 km when the Moon is at apogee. In addition, the Chang'e satellites had to carry out many attitude maneuvers during their flights to the Moon and during operations in lunar orbit. The distance across China from east to west is only 5,000 km, forming another challenge to TT&C continuity. At present, the combination of a basic TT&C system and the Chinese astronomical observation network has met the basic needs of the Chang'e program, but only by a small margin.

Anatoly Perminov, head of the Russian Federal Space Agency, revealed in September 2006 in RIA Novosti that Russia and China were working on lunar exploration as partners, and that the Russian-Chinese Space Sub-Commission's priority was to conclude a joint lunar exploration agreement by the end of that year.[14]