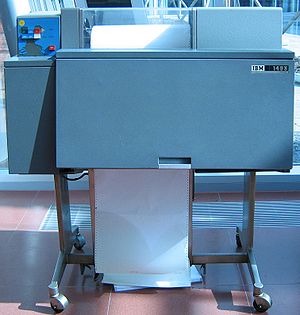 The line printer is a form of high speed impact printer in which one line of type is printed at a time. They are mostly associated with the early days of computing, but the technology is still in use. Print speeds of 600 to 1200 lines-per-minute (approximately 10 to 20 pages per minute) were common.

In a typical drum printer design, a fixed font character set is engraved onto the periphery of a number of print wheels, the number matching the number of columns (letters in a line) the printer could print. The wheels, joined to form a large drum (cylinder), spin at high speed and paper and an inked ribbon is stepped (moved) past the print position. As the desired character for each column passes the print position, a hammer strikes the paper from the rear and presses the paper against the ribbon and the drum, causing the desired character to be recorded on the continuous paper. Because the drum carrying the letterforms (characters) remains in constant motion, the strike-and-retreat action of the hammers had to be very fast. Typically, they were driven by voice coils mounted on the moving part of the hammer.

Often the character sequences are staggered around the drum, shifting with each column. This obviates the situation whereby all of the hammers fire simultaneously when printing a line that consists of the same character in all columns, such as a complete line of dashes ("----").

Lower-cost printers did not use a hammer for each column. Instead, a hammer was provided for every other column and the entire hammer bank was arranged to shift left and right, driven by another voice coil. For this style of printer, two complete revolutions of the character drum were required with one revolution being used to print all the "odd" columns and another revolution being used to print all of the "even" columns. But in this way, only half (plus one) the number of hammers, magnets, and the associated channels of drive electronics were required.

At least one low-cost printer, made by CDC, achieved the same end by moving the paper laterally while keeping the hammer bank at rest.

Dataproducts was a typical vendor of drum printers, often selling similar models with both a full set of hammers (and delivering, for example 600 lines-per-minute of output) and a half set of hammers (delivering 300 LPM).

Chain printers (also known as train printers) placed the type on moving bars (a horizontally-moving chain). As with the drum printer, as the correct character passed by each column, a hammer was fired from behind the paper. Compared to drum printers, chain printers had the advantage that the type chain could usually be changed by the operator. A further advantage was that vertical registration of characters in a line was much improved over drum printers, which needed extremely precise hammer timing to achieve a reasonably straight line of print. By selecting chains that had a smaller character set (for example, just numbers and a few punctuation marks), the printer could print much faster than if the chain contained the entire upper- and lower-case alphabet, numbers, and all special symbols. This was because, with many more instances of the numbers appearing in the chain, the time spent waiting for the correct character to "pass by" was greatly reduced. Common letters and symbols would appear more often on the chain, according to the frequency analysis of the likely input. It was also possible to play primitive tunes on these printers by timing the nonsense of the printout to the sequence on the chain, a rather primitive piano. IBM was probably the best-known chain printer manufacturer and the IBM 1403 is probably the most famous example of a chain printer.

Band printers are a variation of chain printers, where a thin steel band is used instead of a chain, with the characters embossed on the band. Again, a selection of different bands were generally available with a different mix of characters so a character set best matched to the characters commonly printed could be chosen. Dataproducts was a well known manufacturer of band printers, with their B300, B600, and B1000 range, the model number representing the lines per minute rate of the printer. (The B300 was effectively a B600 with only half the number of hammers—one per two character positions. The hammer bank moved back and forth one character position, requiring two goes to print all characters on each line.)

Bar printers were similar to chain printers but were slower and less expensive. Rather than a chain moving continuously in one direction, the characters were on fingers mounted on a bar that moved left-to-right and then right-to-left in front of the paper. An example was the IBM 1443.

Most drum, chain, and bar printers were capable of printing up to 132 columns, but a few designs could only print 80 columns and some other designs as many as 160 columns.

Printronix and TallyGenicom are well-known vendors of comb printers.

Because all of these printing methods were noisy, lineprinters of all designs were enclosed in sound-absorbing cases of varying sophistication.

All line printers used paper provided in boxes of continuous fan-fold forms rather than cut-sheets. The paper was usually perforated to tear into cut sheets if desired and was commonly printed with alternating white and light-green areas, allowing the reader to easily follow a line of text across the page. This was the iconic "green bar" form that dominated the early computer age. Pre-printed forms were also commonly used (for printing cheques, invoices, etc.). A common task for the system operator was to change from one paper form to another as one print job completed and another was to begin. Some lineprinters had covers that opened automatically when the printer required attention.

These continuous forms were advanced through the printer by means of tractors (sprockets or sprocket belts). Depending on the sophistication of the printer, there might simply be two tractors at the top of the printer (pulling the paper) or tractors at the top and bottom (thereby maintaining paper tension within the printer). The horizontal position of the tractors was usually adjustable to accommodate different forms. The earliest printers by IBM used a hydraulic motor to move the forms. In later line printers, High-speed servomechanisms usually drove the tractors, allowing very rapid positioning of the paper, both for advancing line-by-line and slewing to the top of the next form. The faster line printers, of necessity, also used "stackers" to re-fold and stack the fan-fold forms as they emerged from the printer.

Many printers supported ASA carriage control characters which provided a limited degree of control over the paper, by specifying how far to advance the paper between printed lines. Various means of providing vertical tabulation were provided, ranging from punched paper tape to fully electronic (software-controllable) tab simulation

The first line printer was the "Potter Flying Typewriter", in 1952. "Instead of working laboriously, one character at a time, it prints whole lines at once, 300 lines per minute, on a paper band. ... Heart of the machine is a continuously spinning disk with the necessary letters and numbers on its rim. ... As the disk revolves, 80 electrically operated hammers tap the back of the paper against an inked ribbon in contact with the disk, thus printing the proper characters in the proper places on the line." [1]

This technology is still in use in a number of applications. It is usually both faster and has lower total cost of ownership, including purchase price, consumables, paper, and maintenance, than laser printers. Line printers continue to be used for printing box labels, medium volume accounting and other large business applications. Multi-part paper forms (carbon copies or carbonless copy paper) printed in one operation are sometimes useful. The limited character set, fixed character spacing, and relatively poor print quality make impact line printers unsuitable for correspondence, books, and other applications requiring high print quality.

Laser printers became popular when word processing replaced typewriters. In high volume printing, continuous form laser printers have become popular. These no longer had fixed columns or monospaced type and offered a range of fonts as well as graphics. The technology operates in a way similar to single sheet laser printing.

The names of the lp and lpr commands in Unix were derived from the term "line printer". Analogously, many other systems call their printing devices "LP", "LPT", or some similar variant, whether these devices are in fact line printers or other types of printers. These references served to distinguish formatted final output from normal interactive output from the system, which in many cases in line printer days was also printed on paper (as by a teletype) but not by a line printer.