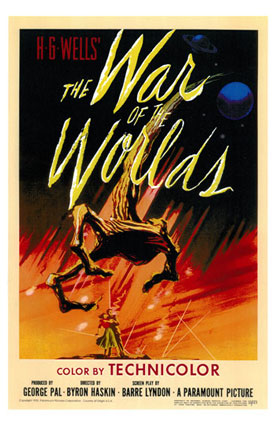 
"The War of the Worlds" (also sometimes known as "H.G. Wells' The War of the Worlds") is a starring and . It was the first on screen depiction of the classic novel of the same name. Produced by and directed by from a script by , it was the first of several adaptations of Wells' work to be filmed by Pál, and is considered to be one of the great science fiction films of the 1950s. It won an Oscar for its s.

The story is updated to the 1950s for this film, and the setting is moved from the environs of to southern . Dr. Clayton Forrester (Gene Barry), a world renowned physicist, is on a fishing vacation in Pine Summit when a giant lands in the hills above the nearby town of Linda Rosa. Along with the residents, he goes to investigate. At the impact site, he meets Sylvia van Buren (Ann Robinson) and her uncle, Pastor Dr. Matthew Collins (Lewis Martin). Finding the meteorite too hot to examine closely, he decides to wait in town for the meteorite to cool down.

Later, after most of the people have gone home, the meteorite (actually a Martian spacecraft) unscrews and opens, disgorging a Heat-Ray device. When the three men who remained behind approach in friendly greeting, it kills them without warning. Forrester and the sheriff are also attacked when they return, but survive. The meteorite deploys three floating war machines. Pastor Collins approaches the Martians in peace, but they kill him with their without attempting to communicate.

The full force of the armed forces, up to and including an A-bomb dropped by a "Flying Wing", is unleashed against the invaders; but, even more so than in Wells' book, human weapons prove to be totally ineffective, as the Martians are protected by an impenetrable . Meanwhile, reports appear of other landings all over the world.

Forrester and Sylvia flee, along with the rest of the civilians. After their plane crashes, they take shelter in a nearby abandoned . They are trapped in the basement when another meteorite crashes into the house. The couple comes in contact with a Martian when the creature leaves its war-machine to look around. They manage to fight it off and escape to Los Angeles, eventually rejoining Forrester's co-workers, who are trying to find a way to defeat the aliens. However, widespread panic among the general populace scatters the research group and their equipment is wrecked. In the confusion, Forrester and Sylvia become separated.

All seems lost, with humanity helpless before the onslaught. Forrester frantically searches for Sylvia in the burning ruins of a Los Angeles under attack. He finally finds her with other survivors awaiting the end in a church. Suddenly, they see an approaching Martian war machine crash. Upon investigating, Forrester realizes that the seemingly all-powerful invaders are dying. As in the book, they have no defense against Earth's es and .

The film opens with a prologue in black and white and switches to at the opening title sequence.

George Pál originally planned for the final third of the film to be in 3-D to correlate with the final attack by the Martians. The plan was dropped prior to actual production of the film, presumably being deemed too expensive.

stock footage was used to produce a montage of destruction to show the worldwide invasion, with armies of all nations joining together to fight the invaders.

Wells had used the second half of his novel to make a satirical commentary on civilization and the class struggle. Lyndon did not write the satire into the movie, though he did add a religious theme (in contrast to Wells original novel), to the point that the Martians begin dying shortly after blasting a church.

A conscious effort was made to avoid the "flying saucer" look of stereotypical UFOs; the Martian war machines were instead sleek, sinister-looking constructs shaped like s floating over the ground. Three Martian war machines were made for the film, out of copper. One was modified for use in the film "" (which Byron Haskin also directed) and was supposedly later melted down for a copper drive. owned one. It is believed that the third was destroyed in a fire.

Each machine was topped with a towering mobile eye, pulsing, peering around and firing beams of red sparks, all accompanied by thrumming and a high-pitched clattering shriek ( [http://www.waroftheworldsmovies.info/images/thewaroftheworldsheatray.wav] ) when the was fired from the eye. The distinctive of the weapon was created by the orchestra performing the musical score, mainly through the use of violins and cellos. For many years, it was utilized as a standard "ray-gun" sound on children's television shows and the sci-fi anthology series "", particularly the episode "".

The machines also fired a green ray (referred to as a "skeleton beam") from their wingtips, generating a distinctive sound ( [http://www.waroftheworldsmovies.info/images/thewaroftheworldsgreenray.wav] ) and exposing the interior of its target (in the case of humans, their skeletons became briefly visible) before disintegrating it. This latter weapon seems to have been substituted for the chemical weapon described in the novel. The sound effect was reused in "", accompanying the launch of s.

Much effort was put forth to recreate the tripods of the novel; but they proved problematic for various reasons and it was eventually decided to make the machines float on three invisible, electronic legs instead. To show their existence, sparks were to be shown directly under the hovering Martian war machines as they move along &ndash; however, in the final film, these only appear when the military and Dr Forrester first see one of the machines. It proved too difficult to mark out the invisible legs when smoke and other effects also had to be seen beneath the machines.

The Martians, rather than being -like as in the book, were instead presented as small, brown, hulkish bipeds having two hands, each with three fingers. They had no heads mounted on their shoulders; instead a single large eye, with three distinct lenses (blue, red and green), peered out from the top of the torso.

"The War of the Worlds" had its official in Hollywood on February 20, 1953, although it did not go into general theatrical release until the fall of that year.

"" review noted the film was "an imaginatively conceived, professionally turned adventure, which makes excellent use of Technicolor, special effects by a crew of experts and impressively drawn backgrounds...Director Byron Haskin, working from a tight script by Barre Lyndon, has made this excursion suspenseful, fast and, on occasion, properly chilling" [cite web|url=http://movies.nytimes.com/movie/review?_r=1&res=9A07E6DD153EE53BBC4C52DFBE668388649EDE&oref=slogin|last=|first=|title= The Screen in Review: New Martian Invasion Is Seen in War of the Worlds, Which Bows at Mayfair|publisher="New York Times", August 14, 1953|accessdate=2007-12-29] . "Brog" in "Variety" felt it was "a socko science-fiction feature, as fearsome as a film as was the 1938 radio interpretation...what starring honors there are go strictly to the special effects, which create an atmosphere of soul-chilling apprehension so effectively audiences will actually take alarm at the danger posed in the picture. It can't be recommended for the weak-hearted, but to the many who delight in an occasional good scare, it's sock entertainment of hackle-raising quality"

*The "War of the Worlds" TV series is essentially a sequel to this film, and employs several elements from the film, including having Ann Robinson reprise her role as Sylvia Van Buren in three episodes. Robinson also quasi-reprised her role in two later films, first as Dr. Van Buren in 1988's "Midnight Movie Massacre" and as Dr. Sylvia Van Buren in 2005's "The Naked Monster".

*"" named one of its lead characters Dr. Clayton Forrester in an homage to the film. Ironically (and perhaps intentionally so for humour), the series' Forrester is a .

*In "Independence Day" (1996), the aliens (not from Mars) are defeated in part by infecting the mothership with a . There are also several other references to the 1953 film, such as the failed attempt to use an atomic bomb by a flying wing but this time the Nuke was dropped by a stealth bomber; a downed twisted into the shape of the of the original war machines; and Captain Hiller being based out of El Toro, which Dr. Forrester mentions as the home of the Marines who make the first assault on the Martian war machines. In a homage to "War of the Worlds", director added a scene in which three helicopters are destroyed while attempting to communicate with a city destroyer.

*'s 1996 "" was a more humorous treatment, "very" loosely based upon the original story, but more directly adapted from ' famous 1962 series. The film primarily spoofs 1950s alien invasion films, including "The War of the Worlds". In this version, the Martians are repelled not by germs, but by 's , which causes their heads to explode.

* 's 2005 adaptation, though not a remake, does feature several references to the original film. Gene Barry and Ann Robinson had cameo appearances, and the aliens kept their three-fingered hands, though they became reptile-like tripods.