The serial charts the conflict between the two as Bob Wayne searches for justice and revenge while Doctor Satan completes his plans for world domination.

It was directed by the legendary directorial team of William Witney and John English. Doctor Satan is played by Edward Ciannelli and Bob Wayne by Robert Wilcox.

Governor Bronson, who raised Bob Wayne from childhood after the death of his parents, is killed at the hands of a world-domination-seeking mad scientist called Doctor Satan. Fearing that his death might be at hand,as it has been for everyone else who had opposed the Doctor, the Governor first confides in Bob with a secret about his past. Bob's father was really an outlaw in the Old West, who fought injustice while wearing a chainmail cowl and leaving small coiled copper snakes as his calling card.

Following his guardian's death, Wayne decides to adopt his outlaw father's "Copperhead" persona, donning his father's cowl. Doctor Satan, meanwhile, requires only a remote control device invented by Professor Scott to complete his army of killer robots and gain all the power and riches he desires.

The Copperhead fights Doctor Satan, rescuing the Professor and others and preventing the Doctor from completing his plot. 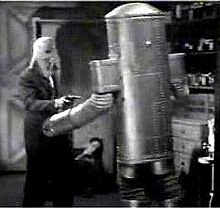 The Copperhead against Doctor Satan's Robot in chapter eight. A small army of robots were to have been built to oppose Superman, but the special effects team had time to complete only one before filming began.

Mysterious Doctor Satan was originally scripted to be a Superman serial for Republic,[4] but the license National Comics (later DC Comics) had provided to the Fleischer animation studio to make their Superman cartoon series was exclusive and therefore prevented other film companies from using the character at the time, even in a non-animated production. The script was subsequently reworked with a new character called the Copperhead standing in for Superman. The Copperhead's love interest, Lois, was not changed between these drafts, other than her surname. The Copperhead's secret identity, "Bob Wayne," sounded like that of another masked hero that had appeared the year before, Batman.

Mysterious Doctor Satan was budgeted at $147,847 although the final negative cost was $147,381 (a $466, or 0.3%, under spend). This was one of only three pre-war serials to be made under budget. 1940 was the first year in which Republic's overall spending on serial production was less than in the previous year.[1]

According to Stedman, Republic was unconsciously "observing the transfer of the costumed crusader from prairie to pavement" in the writing of this serial. The western cowboy hero would soon be replaced in popular culture by superheroes and masked crimefighters.[5]

The serial introduces the updated "Republic Robot." A more primitive design had appeared in Undersea Kingdom (1936). The new robot would appear again in Zombies of the Stratosphere (1952). It was parodied in the metafictional The Adventures of Captain Proton "holo-novels" of Star Trek: Voyager as "Satan's Robot."

Director William Witney considered this one of his lesser serials. He was especially unfond of the Republic Robot and proposed a more extravagant special effect to special effects head Howard Lydecker. However, the studio had neither enough time nor enough money to create the new robot before filming was to begin so Witney was stuck with the "hot water boiler."[6]

The Bank Robbery by Robot scene was reused as stock footage in the later serial Zombies of the Stratosphere.[5]

The Title of Chapter 5, "Doctor Satan's Man of Steel", refers to Doctor Satan's Robot (which is made of steel), the actor inside the robot costume (Tom Steele) and the original intent of making a Superman serial ("The Man of Steel" is one of Superman's most famous epithets).

Mysterious Doctor Satan's official release date is 13 December 1940, although this is actually the date the seventh chapter was made available to film exchanges.[1]

In the early 1950s, Mysterious Doctor Satan was one of fourteen Republic serials edited into a television series. It was broadcast in seven 26½-minute episodes (the other thirteen all had only six episodes).[1]

Mysterious Doctor Satan was also one of twenty-six Republic serials re-released as a film on television in 1966. The title of the film was changed to Doctor Satan's Robot. This version was cut down to 100-minutes in length.[1]

Harmon and Glut describe Mysterious Doctor Satan as "one of Republic's best serials... [which] set the pace for others that followed." They go on to narrow it down to one of the five or six greatest serials Republic ever made. Many people involved in the serial are singled out for praise but the main one is Ciannelli as Doctor Satan, a character who steals the show from the relatively bland Copperhead. The directors, William Witney and John English are noted as the best in their field. Cy Feuer is praised for his music, which is both moody and exciting. Mention is also made of the "superior" lighting and "some of the best stunt work in the fights to ever appear on screen in any kind of film."[3]

The tone of the serial was set by Eduardo Ciannelli's "piercing malevolent countenance."[7] Ciannelli's performance "in a role so susceptible to overacting and scenery chewing" maintained the "exact balance between a wild-eyed lunatic with dreams of world conquest and the brilliant, gifted man of science that Doctor Satan might have been. There was a poignancy in his portrayal that gave the uneasy feeling that this cruel genius was somehow a victim of forces that drove him to evil against his basic desire. Nothing was said or done in the screenplay to indicate it, but the feeling was there, nonetheless."[8]