Avro Tutor
Not to be confused with Avro Tudor.

A.V. Roe's Type 621 Tutor[1][2] was a two-seat British radial-engined biplane from the interwar period. It was a simple but rugged initial trainer that was used by the Royal Air Force as well as many other air arms worldwide.

The Avro Model 621 was designed by Roy Chadwick as an Avro private venture metal replacement for the Avro 504. Conceived as a light initial pilot trainer, the biplane design featured heavily staggered equal span, single-bay wings; the construction was based on steel tubing (with some wooden components in the wing ribs) with doped linen covering. A conventional, fixed divided main undercarriage with tail skid was used in all but the latest aircraft, which had a tail wheel.

The Model 621 was powered either by a 155 hp (116 kW) Armstrong Siddeley Mongoose or Armstrong Siddeley Lynx IV (180 hp/130 kW) or IVC (240 hp/179 kW) engine; later Lynx-powered models had the engine enclosed in a Townend ring cowling. The Mongoose powered version was called the 621 Trainer and the more numerous Lynx-engined aircraft the Tutor. The Tutor also differed by having a more rounded rudder.

Production was started against an order for three from the Irish Free State and 21 Trainers from the Royal Air Force. The RAF required a replacement for the wooden Avro 504, and after three years of trials against other machines such as the Hawker Tomtit it was adopted as their basic trainer, supplanting the 504 in 1933 and remaining in this role until 1939. As well as the 21 Trainers a total of 381 Tutors and 15 Avro 646 Sea Tutors were eventually ordered by the RAF. Subsequently, the Model 621 achieved substantial foreign sales. A.V. Roe and Co exported 29 for the Greek Air Force, six for the Royal Canadian Air Force, five for the Kwangsi AF, three for the Irish AF (where it was known as the Triton) and two for each of the South African and Polish AFs. In addition 57 were licence built in South Africa, and three licence built by the Danish Naval Shipyard.

A total of 30 Tutors were exported to the Greek Air Force and at least 61 were licence built [3] in Greece by KEA. A number of Greek Tutors was incorporated in combat squadrons after Greece's entrance in WWII, used as army co-operation aircraft.

Known for its good handling, the type was often featured at air shows. Over 200 Avro Tutors and five Sea Tutors remained in RAF service at the beginning of the Second World War.

The 621 was designed as a military trainer and few reached the civil registers. In the 1930s, in addition to 10 prototypes and demonstrators, two were used by Alan Cobham's Flying Circus and two trainers were retired from the RAF into private use. One 621 was used from new by Australian National Airways. After the war another four ex-RAF 621s appeared on the civil register. 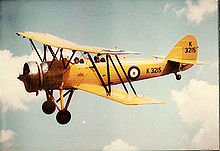 Avro Tutor 621 of the Shuttleworth Collection

G-AHSA was used for communication duties during the Second World War, struck off December 1946 and purchased by Wing Commander Heywood. After suffering engine failure in the early stages of the filming of Reach for the Sky, it was purchased by the Shuttleworth Collection and restored to flying condition.[6]