MXR, also known as MXR Innovations, was a manufacturer of guitar effects units, co-founded in 1973 by Keith Barr (who went on to found Alesis) and Terry Sherwood (who went on to co-found Applied Research & Technology).[1] MXR was based in the United States in Rochester, New York. MXR Innovations, Inc. was incorporated in 1974. The MXR trademark is now owned by Jim Dunlop, which continues to produce the original effects units along with new additions to the line.

Founded in 1973, MXR Innovations entered the effects market as a pioneer with the development of tough and rugged stomp boxes, simple utilitarian designs and small sizes. Jim Dunlop, having purchased the brand in 1987, continues MXR’s traditional pedal line of original MXR classics that have come to define the brand, such as the Phase 90 and Dyna Comp, as well as modern pedals like the Carbon Copy and Fullbore Metal. Dunlop has also added a line dedicated to bass effects boxes, MXR Bass Innovations, which has recently released the Bass Octave Deluxe and Bass Envelope Filter. Both pedals won Editor Awards in Bass Player Magazine and Platinum Awards from Guitar World Magazine. The MXR Custom Shop is responsible for recreations of vintage models such as the hand-wired Phase 45, as well as doing limited runs of pedals featuring premium components and highly modified designs such as the new Custom Comp.

The first MXR effects pedal was the M-101 MXR Phase 90, widely used on the first two Van Halen albums.[2] The MXR Phase 45, a milder version of the Phase 90, was also released, as well as a programmable version, the Phase 100'’. A 9 volt battery was used to power these effects and could give them up to 500 hours of power. The input was directly connected to the circuit’s power supply (which is very common in vintage effect pedals, such as the Crybaby wah). When the pedal was not in use, players were instructed to remove the cable from the pedal’s input to conserve battery life. When the battery finally did run out, in order to replace it, one had to unscrew the bottom plate, and plug the new battery in, replacing the screws upon completion. Each of the pedal’s enclosures had 4 screws attaching the bottom plate. Like many other pedals of the day, MXR pedals (prior to 1981) did not have LEDs, A/C adaptor jacks, or true-bypass switching. Over the years, there were two distinct periods that the reference series pedals went through. Each of these two periods, however, had two sub phases which will be explained below.

First, was the "Script Period." This is in reference to the cursive writing found on the pedal’s casing. The earliest MXR script pedals were housed in BUD boxes. These “BUD” boxes were cast out of aluminum, by the Bud Box Company located in Willoughby, Ohio. Later, MXR still made script logo pedals, but they were housed in zinc die cast casings made in-house. When compared side by side, the aluminum “BUD” boxes are considerably lighter in weight than the zinc boxes. The earliest script logo pedals were actually made in the basement shop of the founders of MXR[3] and the logos were silk screened by hand. These very first pedals can be identified by a slightly larger font “MXR" on the case. These script pedals had carbon film resistors and are regarded by vintage gear collectors as the best of the best. The full line of MXR pedals to bear the script logo are as follows: Phase 45, Phase 90, Phase 100, Dyna Comp, Noise Gate / Line Driver, Distortion + and Blue Box. These pedals routinely go for $200 to $300 US depending on which pedal it is it is and in what condition it is in. The Blue Box, Phase 90 and Dyna Comp are the three most valuable and collectible MXR “script” pedals. The Dyna Comp from the “script” era had a CA3080 metal can IC in the circuit and to tone buffs and vintage gear connoisseurs this circuit is the cream of the crop. As the script-logo era was coming to a close and the box-logo era was beginning, there was a bit of a transitional period.

The "Box Logo Period 1" was next. This began to happen around 1975-6 and lasted until 1981. The main way to tell a script logo versus a box logo is the most obvious one, the writing on the front of the box. Also, the usage of carbon film resistors on the interior circuits. These resistors look cylindrical in appearance and have old school tape lines on them which are color coded to tell you the value of the piece. Around the time the company logo changed, the resistors and other parts such as capacitors and diodes changed as well. Metal film resistors are easy to spot because they resemble the bodies of ants and are not perfectly cylindrical in shape. They are less noisy and are smaller than carbon film resistors. During this transitional period, some script logo pedals had box logo circuits, and vice versa. This is why it is important to check the circuits of every vintage MXR pedal you are thinking about buying. Sometimes what you're buying isn’t what you think it is, which can be good or bad. The list of pedals included in the box logo era are the same as above with the addition of the micro flanger, micro chorus, loop selector, envelope filter, 6-band equalizer, 10-band equalizer and micro amp. The pedals in the first period did not have LEDs, A/C adaptor jacks, or true-bypass. The “Box logo period 2" changed that though. These box logo pedals are very collectible too; many collectors seek out these pedals as they are cheaper than the script logo pedals, and if they get lucky, they may even end up with a script logo circuit in the end. The second phase of the box logo pedals started to take place in early 1981, and went until 1984, when the company shut its doors (or stopped making pedals). The main change in this era was the addition of LEDs and A/C adaptor jacks. These pedals used 1/8" power jacks and had exactly the same circuit board as their pre-1981 box logo brothers.

MXR also created several pedals that were AC-powered and were 4¾″ wide by 3½″ tall (some were of different dimensions though):

In 1981, MXR introduced a line of inexpensive plastic ("Lexan" polycarbonate) pedals known as the Commande Series. These were priced to compete with the Japanese-manufactured effects pedals that were flooding the US and world markets. These were a departure from the Reference Series in several aspects. The input, output and power jacks were all moved to the top of the case to allow a tighter grouping on the floor, or pedal board. Also, for the first time, MXR incorporated a large footswitch.

The Series 2000 was a complete rework of the Reference and Commande lines of pedals. These were higher quality pedals, with electronic FET switching and dual LED indicators. They had a new contoured shape, an all-metal chassis and an easily removable plastic battery compartment door. These were fully rubberized on the bottom surface and were remote-controllable. The complete series 2000 line is very user friendly and the sounds they produce are very musical. Most of the pedals had two outputs that provide two distinctly different versions of the same pedal.

The MXR Series 2000 sported six models. These original pedals in the series included the Dyna Comp, Distortion +, Phaser, Stereo Chorus, Stereo Flanger and Time Delay. In late 1983 MXR announced a digital sound effects pedal generator simply known as the ‘’Junior’’. The Junior was released in early 1984 and was added to the other six pedals in the Series 2000 line. The Junior boasted four sound effects: a laser, a clap, a snare and a high hat. These sound effects or samples were written on a large 24-pin ROM chip that was produced by MXR. The ROM chip had to be inserted into the circuit in order for the sounds to register. Two of these ROM chips were produced—the MXR-211a and the MXR-211b. The 211a was installed at the factory and the 211b was sold separately in little plastic containers (like the chips for the MXR drum computer). The 211b is very rare and little is known about it or what sounds it produced. The reason for this is the simple fact that the Junior was only sold for about year or so and the chip (211b) that wasn’t inside the unit, was either lost or discarded. The Junior is not what you would call a normal guitar effect pedal. It didn’t work like a phaser or flanger; it did not produce any effect that enhanced or colored your guitar’s original tone. The sounds were stand alone. These sounds could be accessed by either pushing the foot switch with your hand or foot, or you could plug an instrument into it and by hitting or picking a note, it would produce the sound. Instead of hearing a regular note, it would be the simulated pre-recorded sound in a drone key that would not correspond to the actual key that you were playing in. The Junior was also made to be used with a trigger device and a drum head that MXR sold as well. The Junior had a selector for each of the four settings, as well as a rate knob that would control the beats per minute.

MXR continued to manufacture most of the Reference, Commande and 2000 Series pedals until they closed their doors in 1984. 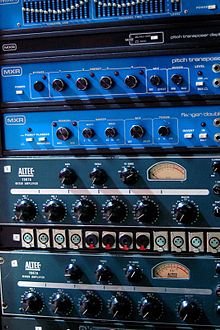 MXR also had a line of professional rackmount effects used by the likes of David Gilmour,[4] Stuart Adamson and Mike Rutherford. These included:

In 1983, MXR introduced one of the first multi-effect rack units for guitar and bass, the Omni. The Omni had 6 different effects: sustain, distortion, delay, equalization, flanger and chorus. The main unit was a 2U with separate controls for each effect. There was a footpedal (M-181) that enabled the player to switch the different effects on and off, as well as changing the order of the distortion and equalizer effects, a master bypass as well as an effects loop.

MXR featured a line of processors that were targeted for home entertainment systems of the day. Most of these items came with wooden (Walnut) side panels. However the larger 17” wide units also had kits available for single or 1U (M-145 Single 1.75” Rack mount kit) and 2U (M-146 Double 3.5” Rack mount kits) available. You would unscrew the wooden sides and install the rack pieces and you would now have a fully 19” rack-mountable device.

Inside of MXR M-185 Drum Computer

Jim Dunlop (the company famous for the Cry Baby Wah-Wah) bought the MXR licensing rights and currently manufactures reissues of some of the classic MXR effects pedals. Dunlop has created new models in addition to the original lineup, including signature pedals such as Eddie Van Halen Phase 90 and Flanger, and Zakk Wylde's Wylde Overdrive and Black Label Chorus.[5] 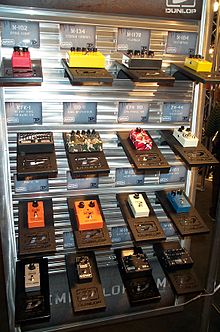 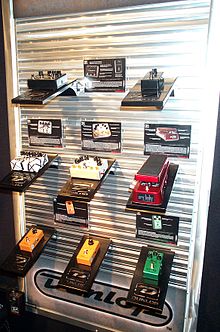 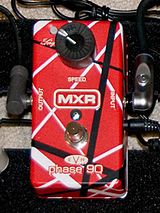