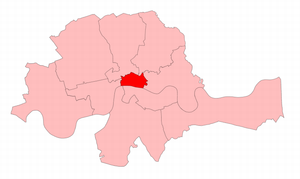 The City of London in the Metropolitan Board of Works area, showing boundaries used from 1868 to 1885.

This borough constituency consisted of the City of London, which is the historic core of the modern Greater London.

The southern boundary of the City is the north bank of the River Thames. The City of Westminster is situated to the west. The districts of Holborn and Finsbury are to the north, Shoreditch to the north-east and Whitechapel to the east.

London is first known to have been enfranchised and represented in Parliament in 1298. Because it was the most important city in England it received four seats in Parliament instead of the normal two for a constituency. Previous to 1298 the area would have been represented as part of the county constituency of Middlesex. The City formed part of the geographic county, even though from early times it was not administered as part of Middlesex.

The City was represented by four MPs until 1885 and two thereafter until 1950.

The City of London was originally a densely populated area. Before the Reform Act 1832 the composition of the City electorate was not as democratic as that of some other borough constituencies, such as neighbouring Westminster. The right of election was held by members of the Livery Companies. However the size and wealth of the community meant that it had more voters than most other borough constituencies. Namier and Brooke estimated the size of the City electorate, in the latter part of the 18th century, at about 7,000. Only Westminster had a larger size of electorate.

During the course of the 19th and 20th centuries the metropolitan area of London expanded enormously. The resident population of the City fell as people moved to the new suburbs. However the City authorities did not want to extend their jurisdiction beyond the traditional "square mile", so the Parliamentary constituency was left unchanged as its resident population fell. By the 20th century almost all electors in the City qualified as business voters, due to the ownership of shop or office premises in the City. The business voters were a type of plural voter so when that voting qualification was abolished by the Representation of the People Act 1948 the City had far too few voters to remain a Parliamentary constituency.

In 1950 the area was merged for Parliamentary purposes with the neighbouring City of Westminster, to form a new single-member constituency of Cities of London and Westminster.

There are special provisions concerning the City and Parliamentary boundaries. Rule 3 of the Rules for Redistribution of Seats, used by the Boundary Commission for England in its General Review of Parliamentary Constituency Boundaries starting in 2000, provided that:-

Parliaments of England and Great Britain 1660–1800

Parliament of the United Kingdom from 1801

In multi-member elections the bloc voting system was used. Voters could cast a vote for one to four (or up to two in two-member elections 1885-1950) candidates, as they chose. The leading candidates with the largest number of votes were elected. In 1868 the limited vote was introduced, which restricted an individual elector to using one, two or three votes, in elections to fill four seats.

In by-elections, to fill a single seat, the first past the post system applied.

After 1832, when registration of voters was introduced, a turnout figure is given for contested elections. In multi-member elections, when the exact number of participating voters is unknown, this is calculated by dividing the number of votes by four (to 1868), three (1868–1885) and two thereafter. To the extent that electors did not use all their votes this will be an underestimate of turnout.

Where a party had more than one candidate in one or both of a pair of successive elections change is calculated for each individual candidate, otherwise change is based on the party vote.

Candidates for whom no party has been identified are classified as Non Partisan. The candidate might have been associated with a party or faction in Parliament or consider himself to belong to a particular political tradition. Political parties before the 19th century were not as cohesive or organised as they later became. Contemporary commentators (even the reputed leaders of parties or factions) in the 18th century did not necessarily agree who the party supporters were. The traditional parties, which had arisen in the late 17th century, became increasingly irrelevant to politics in the 18th century (particularly after 1760), although for some contests in some constituencies party labels were still used. It was only towards the end of the century that party labels began to acquire some meaning again, although this process was by no means complete for several more generations.

Sources: The results are based on the History of Parliament Trust's volumes on the House of Commons in various periods from 1715–1820, Stooks Smith from 1820 until 1832 and Craig from 1832. Where Stooks Smith gives additional information this is indicated in a note. See references below for further details of these sources.