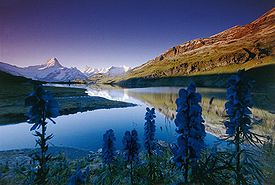 Natural capital is the extension of the economic notion of capital (manufactured means of production) to goods and services relating to the natural environment. Natural capital is thus the stock of natural ecosystems that yields a flow of valuable ecosystem goods or services into the future. For example, a stock of trees or fish provides a flow of new trees or fish, a flow which can be indefinitely sustainable. Natural capital may also provide services like recycling wastes or water catchment and erosion control. Since the flow of services from ecosystems requires that they function as whole systems, the structure and diversity of the system are important components of natural capital.

In Natural Capitalism: Creating the Next Industrial Revolution[1] the authors see the world's economy as being within the larger economy of natural resources and ecosystem services that sustain us. This implies that we should attribute value to things such as human intelligence and cultures to hydrocarbons, minerals, trees, and microscopic fungi.[clarification needed] The authors argue that only through recognizing this essential relationship with the Earth's valuable resources can businesses, and the people they support, continue to exist. The book has many practical suggestions for companies interested in a sustainable future.[2]

According to the authors, the "next industrial revolution" depends on the espousal of four central strategies: "the conservation of resources through more effective manufacturing processes, the reuse of materials as found in natural systems, a change in values from quantity to quality, and investing in natural capital, or restoring and sustaining natural resources."[2]

Natural capital is described in the book Natural Capitalism as a metaphor for the mineral, plant, and animal formations of the Earth's biosphere when viewed as a means of production of oxygen, water filter, erosion preventer, or provider of other ecosystem services. It is one approach to ecosystem valuation, an alternative to the traditional view of all non-human life as passive natural resources, and to the idea of ecological health. However, human knowledge and understanding of the natural environment is never complete, and therefore the boundaries of natural capital expand or contract as knowledge is gained or lost.

In a traditional economic analysis of the factors of production, natural capital would usually be classified as "land" distinct from "capital" in its original sense. The historical distinction between "land" and "capital" was that land is naturally occurring and its supply is assumed to be fixed, whereas capital as originally defined referred only to man-made goods, (e.g., Georgism[3] [4]). It has been argued that it's useful to view many natural systems as capital because they can be improved or degraded by the actions of man over time (see Tragedy of the commons), so that to view them as if their productive capacity is fixed by nature alone is misleading. Moreover, they yield benefits naturally which are harvested by humans, those being nature's services, 17 of which were closely analyzed by Robert Costanza. These benefits are in some ways similar to those realized by owners of infrastructural capital which yields more goods, e.g. a factory which produces automobiles just as an apple tree produces apples.

The term and metaphor were first used by E.F. Schumacher in his book Small Is Beautiful[5] and are closely identified with Herman Daly, Robert Costanza, the Biosphere 2 project, and the Natural Capitalism economic model of Paul Hawken, Amory Lovins, and Hunter Lovins until recently, when it began to be used by politicians, notably Ralph Nader, Paul Martin Jr., and agencies of the UK government including the London Health Observatory. Some economists and politicians, including Martin, believe natural capital measures play a key role in money supply and inflation measurements in a modern economy. They point to uneconomic growth and a lack of any direct connection between measuring well-being and such indicators as GDP.

Indicators adopted by United Nations Environment Programme's World Conservation Monitoring Centre and the Organisation for Economic Co-operation and Development (OECD) to measure natural biodiversity use the term in a slightly more specific way. However, all users of the term differentiate natural from man-made manufactured capital or infrastructural capital in some way. It does not appear that the basic principle is controversial, although there is much controversy on ecological health indicators, value of nature's services and Earth itself, consistent methods of ecosystem valuation, biodiversity metrics and methods of audit that might apply to these services, systems and biomes.

Full cost accounting, triple bottom line, measuring well-being and other proposals for accounting reform often include proposals to measure an "ecological deficit" or "natural deficit" alongside a social deficit and financial deficit. It is difficult to measure such a deficit without some agreement on methods of valuating and auditing at least the global forms of natural capital (e.g. value of air, water, soil).

The concept of natural capital implies that the savings rate of an economy is an imperfect measure of what the country is actually saving, because it measures only investment in man-made capital. The World Bank now calculates the genuine savings rate of a country, taking into account the extraction of natural resources and the ecological damage caused by CO2 emissions.

Ecologists are teaming up with economists to measure the wealth of ecosystems and to express their value as a way of finding solutions to the biodiversity crisis.[6][7][8] Some researchers have attempted to place a dollar figure on ecosystem services, such as the value that the Canadian boreal forest is contributing to global ecosystem services. If ecologically intact, the boreal forest has an estimated value of US$3.7 trillion. The boreal forest ecosystem is one of the planet's great atmospheric regulators and it stores more carbon than any other biome on the planet.[9] The annual value for ecological services of the Boreal Forest is estimated at US$93.2 billion, or 2.5 greater than the annual value of resource extraction. The economic value of 17 ecosystem services for the entire biosphere (calculated in 1997) has an estimated average value of US$33 trillion per year.[10] These ecological economic values are not currently included in calculations of national income accounts, the GDP and they have no price attributes because they exist mostly outside of the global markets.[11][12] The loss of natural capital continues to accelerate and goes undetected by mainstream monetary analysis.[13]