The Dandy Annual is the current name of the book that has been published every year since 1938, to tie in with the children's comic The Dandy. As of 2011[update] there have been 74 editions, with another (The Dandy Annual 2013) presumably to follow in 2012. The annuals are traditionally published in August, in time for Christmas, and since 1965 they have had the date of the following year on the cover. Before then no date was given.

From 1938 to 1951 the annuals were called "The Dandy Monster Comic". The name changed to "The Dandy Book" in the following year and continued, the year changing for each different annual, until the release of the 2003 book in 2002 when it was renamed "Annual". Despite the comic's relaunch as Dandy Xtreme in 2007, the annual was still known as "The Dandy Annual". This is likely because the annuals of the time were mostly made up of Dandy Comix, due to the topical nature of the magazine's Xtreme content.

In unison with the comic at the time, the cover usually featured Korky the Cat. After Desperate Dan took over the front page in 1984, the annual cover reflected this by featuring both Korky and Dan until the 1991 book - the first ever Dandy Annual not to feature Korky on the front in any way. He has made several appearances since then, despite the main focus shifting to Dan.

In 2006, the original 1939 Monster Comic was re-printed as a facsimile edition in a collector's slipcase.

This information is necessary to identify older annuals which were not dated. If an annual is dated 1950, it would have been published in August 1949. Prices are in shillings and pence with one shilling equal to 5p. 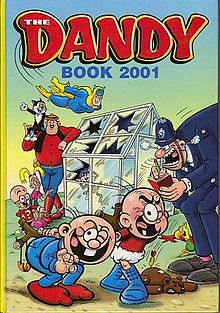