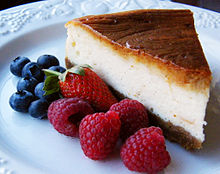 Baked cheesecake with a strawberry, raspberries and blueberries 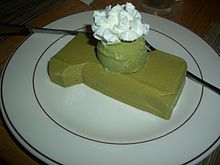 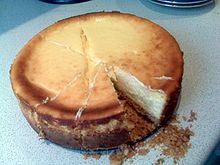 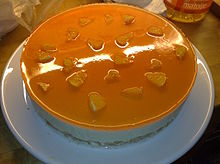 "No bake" cheesecake with orange jelly

Cheesecake is a dessert consisting of a topping made of soft, fresh cheese, usually on a crust or base made from biscuit (such as a graham cracker crust), pastry or sponge cake.[1] They may be baked or unbaked. Cheesecakes are frequently sweetened with sugar and may be flavored or topped with fruit, nuts, fruit sauce and/or chocolate.

Cheesecake was already a popular dish in ancient Greece before Romans adopted it with the conquest of Greece.[2] The earliest attested mention of a cheesecake is by the Greek physician Aegimus, who wrote a book on the art of making cheesecakes (πλακουντοποιικόν σύγγραμμα—plakountopoiikon suggramma).[3][4] Cato the Elder's De Agri Cultura includes recipes for two cakes for religious uses: libum and placenta.[5] Of the two, placenta is most like most modern cheesecakes, having a crust that is separately prepared and baked.[6]

In 1872, William Lawrence, from Chester, New York, while looking for a way to recreate the soft, French cheese Neufchâtel, accidentally came up with a way of making an "unripened cheese" that is heavier and creamier; other dairymen came up with similar creations independently.[7] Lawrence distributed the cheese in foil, becoming a brand that is familiarly recognized as "Philadelphia". Later on in 1912, James Kraft invented a form of this cream cheese, but pasteurized it; this is now the most commonly used cheese for cheesecake.[8] 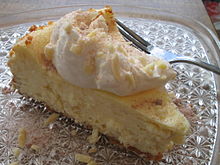 Almost all modern cheesecakes in the United States and Canada use cream cheese; in Italy, cheesecakes use ricotta; Germany and Poland use quark. Cheesecakes are most easily baked in a leak-proof springform pan, often paired with a water bath to more evenly distribute the heat.[9] Because of the high density of most cheesecakes, they continue baking for some time after removal from an oven.

Whether cheesecake should be classified as a cake, a custard, a torte, or something else is a matter of debate.

The early Greeks, from whom the form originates, considered it a cake. Some modern authors point to the presence of many eggs, the sole source of leavening, as proof that it is a torte. Still others claim that the separate crust, the soft filling, and the absence of flour prove that it is a custard pie.[10]

Cheesecakes can be broadly categorized into two basic types: baked and unbaked. Each comes in a variety of styles determined by region: 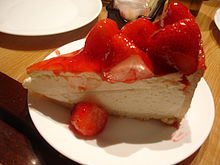 North America has several different recipes for cheesecake and this usually depends on the region in which the cake was baked, as well as the cultural background of the person baking it.[11] These cheesecakes are typically baked before serving.

In the United States, July 30 has been unofficially declared "National Cheesecake Day".[12]

Savory cheesecakes are also made, often for an hors d'oeuvre or served with accompanying salads. 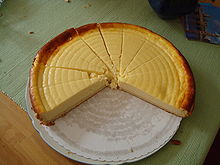 United Kingdom and Ireland
In the United Kingdom and Ireland, cheesecake is typically made with a base of crushed, buttered biscuits and often topped with a fruit compote. The most common commercial varieties are black cherry, blackcurrant, strawberry, passionfruit, raspberry, and lemon curd. The usual filling is a mixture of cream cheese, sugar and cream and it is not baked, but refrigerated. Gelatine (sometimes in the form of fruit-flavored dessert jelly) may also be mixed in with the cheese/cream mixture to keep the filling firm. Cheesecake is a popular menu item in coffee shops and pubs, and there has been a proliferation of more esoteric varieties, such as banoffee flavor, coffee, tea, chocolate, Irish cream, white chocolate and even marshmallow.
Germany
German-style cheesecake (Käsekuchen, Quarkkuchen, Matzkuchen; Topfenkuchen in Austria) uses quark. The Käsesahnetorte (cheese cream tart) adds cream and is not baked. Germany is famous for its unique cheesecake recipes that add a bit of sweet and sour taste, said to "melt in your mouth". This recipe is sometimes translated into English using rennet-based cottage cheese, but a true Quarkkuchen uses quark cheese made from sour milk. Quark is used for the famous German or Bavarian Baked Cheesecake.
Bulgaria
Bulgarian-style cheesecake uses cream cheese in a New York-style filling and smetana for a top layer. Often, ground nuts are added to the crust mixture.
Italy
Ancient Roman-style cheesecake uses honey and a ricotta-like cheese along with flour and is traditionally shaped into loaves. Some recipes call for bay leaves, which may have been used as a preservative.[citation needed] Italian-style cheesecake uses ricotta or mascarpone cheese, sugar, vanilla extract, and sometimes barley flakes. This type of cheesecake is typically drier than American styles. Often, small bits of candied fruit are added.[citation needed]
France
French-style cheesecakes are very light, feature gelatin as a binding ingredient, and are typically only 3 to 5 cm (1 to 2 inches) tall. This variety gets its light texture and flavor from Neufchâtel cheese.
Greece
Greek-style cheesecake commonly uses mizithra and is called Tiropita. It is made with layers of buttered phyllo and filled with a cheese-egg mixture. Other editions can be found, which use thick pastry or puff-pastry instead of phyllo.
Sweden
Swedish-style cheesecake differs greatly from other cheese cakes. A Swedish cheesecake is not layered and is traditionally produced by adding rennet to milk and letting the casein coagulate. It is then baked in an oven and served warm. Since the process of curdling milk is somewhat complicated, alternative recipes intended for home cooking instead use cottage cheese as a base to simulate the texture of the dessert. Swedish-style cheesecake is traditionally served with jam and whipped cream or ice cream. There are two different types of Swedish cheesecake, from different regions in Sweden. To avoid confusion with other cheesecakes, Swedish cheesecake is usually called ostkaka, its Swedish name.
Netherlands and Belgium
Dutch/Belgian-style cheesecakes are typically flavored with melted bittersweet chocolate. Belgian cheesecake also includes a speculaas crust (speculaas is a traditional Dutch-Belgian biscuit).
Poland
Polish sernik (cheesecake), one of the most popular desserts in Poland, is made primarily using twaróg, a type of fresh cheese. 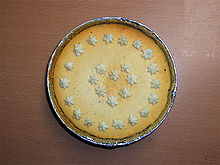 Japan
Japanese-style cheesecake relies upon the emulsification of cornstarch and eggs to make a smooth flan-like texture and almost plasticine appearance.