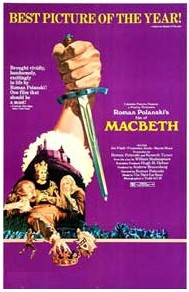 "Macbeth" is a 1971 film directed by , based on 's "The Tragedy of Macbeth", about the Scots Lord who becomes King of Scotland through deceit, treachery, and murder. It features as and as Lady Macbeth. For cinematic purposes, passages from the original play were cut for time and some soliloquies changed to inner monologues for the sake of psychologic realism.

The ending and its thematic implication

The film's bleak ending is the most significant departure from Shakespeare's text. Although Malcolm is crowned as 's rightful king, his concluding speech is omitted in favour of an abrupt, wordless scene showing his brother, Donalbain, returning from exile and entering the witches' lair, implying that he will seek their counsel in usurping King Malcolm like Macbeth usurped King Duncan, thus re-cycling internecine bloodshed. Throughout the story, Donalbain is shown as envious of Malcolm, perhaps even more than was Macbeth.

The ending recasts the story as a closed circuit of action — a "mise en abime" — suggesting that the tragedy will be repeated "ad infinitum". It may explain Fleance's founding of the , the extinction of Duncan's line, and the historical fact of Donalbain's ultimate betrayal of his brother, King Malcolm of Scotland. The sub-plot about the English installation of Malcolm to the Scots throne is downplayed to an extent not in the original work. This is Shakespeare's implication that Fleance is the ancestor of the contemporary King James, his benefactor.

Compared to other cinematic adaptations of "The Tragedy of Macbeth", the bluntly explicit violence shows Macbeth in a historical light, rather than a dramatised regicide. Nevertheless, the attitude of Polanski's "Macbeth" is consistent with the whole of his concern with the unstable dynamics of power and sexuality and the cynic's questioning of conventional notions of heroism and redemptive action.

The film is composed of single- s and subjective point-of-view perspective, whereby the audience are vicarious, common, and voyeuristic participants in the action. Much of the dialogue lacks the emotive subtext imparted by a musical score; the actors' voices are heard "", accompanied by atonal wails and drones. As in his earlier "" (1965), Polanski employs ominously unnatural silences and amplified sounds to create an enveloping discomfort and dread.

The foreshadowing scene wherein Macbeth confronts the witches a second time, and is invited to gaze into their to see his future, is a cryptic, hallucinatory set piece montage: His "" warns of the dangers to hand, culminating in a surreal of the eventual, dynastic triumph of Banquo's heirs — King Banquo holds a looking glass with the image of a future King Banquo holding a looking glass. This "" effect is repeated eight-fold until, ultimately, young Fleance is seen grinning and crowned in the final, eighth looking glass; an allusion to Shakespeare's original stage direction that the last Banquo appear holding a looking glass.

The characterization of Lady Macbeth

In Polanski's version, Macbeth and Lady Macbeth are played by actors younger than has been tradition. In the person of twenty-six-year-old , Lady Macbeth is a softer, tamer woman than is usual.

Her strength and sanity crumble at a horrific pace when she, at last, is aware of the inescapable nightmare she has helped create. Polanski explained this by noting that "directors always present Lady Macbeth as a nagging bitch. But people who do ghastly things in life, they are not grim, like a horror movie". In an audacious departure from Shakespearean convention, Lady Macbeth's famous is performed in the nude.

When his pregnant wife was murdered, Roman Polanski quit his latest film project "Day of the Dolphin" and sank into deep psychological depression, blaming himself for the tragedy.

Meanwhile, he set to adapting "The Tragedy of Macbeth", perhaps the bloodiest work in English literature, but major Hollywood studios refused to finance it. His financial saviour was friend , a senior VP of in Britain who persuaded to finance the film. The financing was believed by some to be the reason for Lady Macbeth's nude scene; later Polanski and co-scenarist said they had written the scene before their association with Hefner.

"Macbeth" was filmed on location in , , U.K., and suffered delays of bad weather and malfunctioning special effects and Polanski's insistence on filming re-takes of difficult and expensively-mounted scenes. The shoot went over schedule, ultimately taking six months to complete and exceeded its $2.5 million budget by some $600,000.

Reception and effect on those involved

Upon theatrical release in October 1971, "Macbeth" received mixed critical reviews; some found the relentless explicit violence and sexuality distracting, complaining that the literal depiction was a crude, reductive interpretation of Shakespeare's poetry. Fact|date=February 2007 Likewise, Polanski's omission of Malcolm's concluding speech, in favour of the abruptly discordant and pessimistic ending, denied the viewer solace and respite by promising a recycling of horror. Fact|date=February 2007 Other critics, however, praised the film for its powerfully disturbing vision, and for Polanski's rigorously logical, technically brilliant and imaginatively cinematic rendering of the play's action. The U.S. named "Macbeth" the Best Film of 1971.

Director Roman Polanski distanced himself from the Playboy magazine production company during the promotion of the film. When interviewed by Sydney Edwards of the "", he cynically remarked about his mercenary acceptance of financing from the controversial men's magazine empire. Victor Lownes felt insulted and personally betrayed by Polanski's comments and indifference to the film's commercial failure, which ultimately was a significant financial loss to Playboy. The disillusioned and humiliated Lownes ended his friendship with Polanski in bitterness and rancour, not renewing the friendship until years later, when both were disgraced men; Playboy had fired Lownes for having lost casino gambling licenses and almost bankrupting the firm; Polanski, fugitive from U.S. law after his conviction for in , California, in 1977, and fleeing to before his final sentencing.

* was first considered to play Macbeth but turned down the role, as he would only agree to star in the film on the condition that he be allowed to direct as well.Fact|date=March 2008
* Polanski originally wanted to play Lady Macbeth, however she turned down the role on account of the requisite nude sleepwalking scene.Fact|date=March 2008
* auditioned for the role of Macbeth but was passed over in favor of Jon FinchFact|date=March 2008; Shaw was eventually cast as Banquo.
* Ian Hogg, who appears as one of the thanes, also played the role of Edmund in 's film of "", which was made the same year and was similarly influenced by the ideas of Fact|date=March 2008.
* The role of Young Siward is played by the film's stunt coordinator, William Hobbs.
* The lyrics to the song that Fleance sings at Macbeth's banquet for Duncan at Inverness are taken from the poem "Merciles Beautè" by . In the context of the film this extraneously inserted song is itself an , as Chaucer lived in the fourteenth century and Shakespeare's "Macbeth" historically takes place in the eleventh century.
*The character of Rosse (or Ross) is developed far beyond what is mentioned about him in the play. He is first brought to the audiences attention during the coronation of Macbeth where he shouts "All hail Macbeth!" loudly, much to the disgust of Banquo. Ironically, when Macbeth is defeated Rosse picks up the crown and declares Malcom king enthusiastically. In the film, he is a knowing accomplice of Macbeth: Rosse tells Macbeth about Macduff's refusal to present himself; in the play, Macbeth knows about this by way of conversation with an unidentified person. In the film, Rosse is the third murderer of Banquo, sent by Macbeth as separate from the first two murderers, and he eventually deposits the other two hired villains to their death in a dungeon when they have outlived their usefulness to the king; in the play, the presence of a third murderer is mysterious and somewhat unnecessary. In the film, he has prior knowledge of the raid on Macduff's castle and leaves the doors open for the murderers to come and kill Macduff's family and servants; in the original text, Rosse is apparently unaware of the killings, even though he is the one who takes the news to Macduff, claiming he heard about it from trustworthy sources. In the film, Rosse betrays Macbeth only after he is not honored with thaneship, a rank symbolized by a ceremonial necklace which the king chooses to bestow upon Seyton instead.
*Keith Chegwin had one of his first film roles in this film playing Fleance when he was a child.