/raɪˈnaɪtɪs/), commonly known as a stuffy nose, is the medical term describing irritation and inflammation of some internal areas of the nose. The primary symptom of rhinitis is nasal dripping. It is caused by chronic or acute inflammation of the mucous membrane of the nose due to viruses, bacteria or irritants. The inflammation results in the generating of excessive amounts of mucus, commonly producing the aforementioned runny nose, as well as nasal congestion and post-nasal drip. According to recent studies completed in the United States, more than 50 million Americans are current sufferers.[clarification needed] Rhinitis has also been found to adversely affect more than just the nose, throat, and eyes. It has been associated with sleeping problems, ear conditions, and even learning problems.[1] Rhinitis is caused by an increase in histamine, which is most often triggered by airborne allergens. These allergens may affect an individual's nose, throat, or eyes and cause an increase in fluid production within these areas. 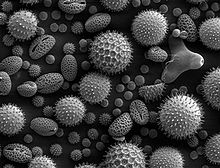 Pollen grains from a variety of common plants can cause hay fever.

Allergic rhinitis or hay fever is when an allergen such as pollen or dust is inhaled by an individual with a sensitized immune system, triggering antibody production. These antibodies mostly bind to mast cells, which contain histamine. When the mast cells are stimulated by pollen and dust, histamine (and other chemicals) are released. This causes itching, swelling, and mucus production. Symptoms vary in severity between individuals. Very sensitive individuals can experience hives or other rashes. Particulate matter in polluted air and chemicals such as chlorine and detergents, which can normally be tolerated, can greatly aggravate the condition.

It is a condition of rebound nasal congestion brought on by extended use of topical decongestants (e.g., oxymetazoline, phenylephrine, xylometazoline, and naphazoline nasal sprays) that work by constricting blood vessels in the lining of the nose.

Chronic rhinitis in form of atrophy of the mucous membrane and glands.

Chronic form of dryness of the mucous membranes

Chronic rhinitis associated with polyps in the nasal cavity.

The management of rhinitis depends on the underlying cause. High-dose administration of Vitamin B12 has been additionally validated to stimulate the activity of the body's TH1 suppressor T-Cells, which then down-regulates the over-production of the allergen antibody IgE in allergic individuals which could decrease both near and long term manifestations of rhinitis symptomology..[7]..[8]