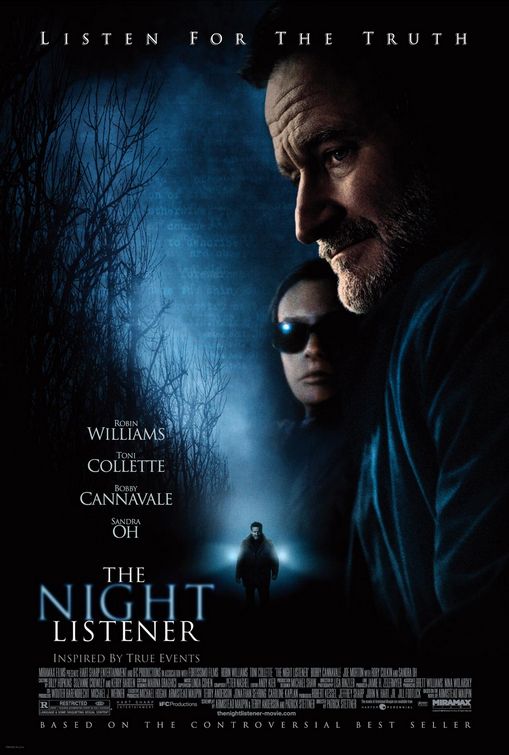 
"The Night Listener" is a 2006 American directed by Patrick Stettner. The by , Terry Anderson, and Stettner is based on Maupin's 2000 bestselling novel of the same name, which was inspired by actual events in the author's life.

Gabriel Noone, a popular show host, is dealing with a separation from his partner Jess. Noone is given a written by teenager Peter Logand, who chronicles the many years of , , and he suffered at the hands of his parents and their friends. Diagnosed with , the youth has been adopted by the social worker who handled his case.

Noone begins a telephone relationship with the boy and his mother Donna. He and Peter become increasingly close and form a father/son relationship, much to the dismay of Jess, especially after he speaks to Donna and suspects she and the boy are the same person. Noone's personal secretary Anna adds fuel to the fire by discussing her research into people who fabricate stories for attention or love. Determined to prove the boy exists and his story is true, Noone decides to pay a surprise visit to him in his hometown in rural .

Noone discovers the return address on Peter's correspondence is actually a mail drop. Soon after, while eating in a local diner, he overhears another patron and recognizes her voice as that of Donna. He's stunned to learn she's blind and uses a .

Noone follows her home and Donna senses he has followed her. She invites him into her home and talks openly about Peter, who she says is currently in the hospital undergoing tests. She assures him he can visit the boy the following day, then suddenly becomes angry and tells him she will not allow him to meet her son. Increasingly suspicious, Noone contacts all the hospitals in Madison, the site of the nearest facilities, but none have the boy registered as a patient.

Gabriel's paranoia about the boy's existence grows and, hoping to find proof of his existence, he breaks into Donna's home. A arrests him for breaking and entering and then, mistakenly believing he's a child molester from the boy's past, severely attacks him with a stun baton before taking him to the station. Noone convinces the police he meant no harm and is released, only to find Donna waiting for him with the news Peter has died. Distressed that Noone does not believe her, Donna collapses in the middle of a road and tries to hold him with her in the path of an oncoming truck. Her attempt to take their lives confirms Noone's suspicion that the boy is a figment of the deranged woman's imagination.

Gabriel returns to and uses his experience to create "The Night Listener", a new radio story. In the final scene, we see Donna searching for a new home in a coastal town, telling the realtor she needs it for herself and her sick child, who has just lost his leg. She has drastically changed her appearance and notably is no longer in need of a guide dog.

In "The Night Listener Revealed", an extra on the film's DVD release, Armistead Maupin discusses the inspiration for his novel. In 1992, the author was sent the manuscript of a memoir allegedly written by fourteen-year-old , who had been sexually and physically abused by his parents since childhood. Since the galleys included a foreword by ist , a close friend of Maupin, and an afterword by of "" fame, he had no reason to doubt the story's veracity.

Maupin was impressed with the maturity of the boy's writing and called him. The two quickly developed a close telephone relationship, and Maupin frequently discussed the boy's various physical ailments (he had been diagnosed with AIDS) with his adopted mother. Several months later, Maupin's then-lover Terry Anderson (who co-wrote the screenplay), who had spoken to the boy on occasion, had a conversation with his mother and was struck by how much she and the boy sounded alike. As he became increasingly suspicious about the situation, Maupin become more and more determined to believe the boy really existed. Only after his many attempts to visit him were aborted by his mother did Maupin begin to think Anderson's belief that he was caught up in a scam was correct.

Following the publication of the novel, a friend of Maupin who wrote for "" instigated an investigation, and the story was reported by "". During filming, stars and both received fan letters written in the same distinctive handwriting as that of the boy, whose existence has never been proven or disproved.

A.O. Scott of the "" called the film a "well-meaning, flat-footed screen adaptation [that] has its creepy, suspenseful moments ... but it shrinks a rich, strange story to the dimensions of an anecdote ... the psychological and intellectual implications that hover over the story are lost in the spooky atmospherics and overshadowed by Ms. Collette’s off-kilter showboating." [cite web|url=http://movies2.nytimes.com/2006/08/04/movies/04list.html|title="New York Times", August 4, 2006]

of the "" described it as "a movie with lots of heart but no heartbeat ... it feels infected by a malaise ... yet the film has intelligence and integrity and cannot be dismissed." [cite web|url=http://www.sfgate.com/cgi-bin/article.cgi?f=/c/a/2006/08/04/DDGH3KA1BI1.DTL|title="San Francisco Chronicle", August 4, 2006]

Michael Phillips of the "" said, "It's a small but crafty and well-acted picture ... The pacing and staging of the later scenes could use a little more electricity and momentum and a little less restraint. Yet "The Night Listener" keeps you watching. And listening." [cite web|url=http://www.calendarlive.com/movies/reviews/cl-et-listener4aug04,0,592323.story|title="Los Angeles Times", August 4, 2006]

David Rooney of "Variety" thought it was "tediously solemn" and a "dawdling mystery thriller [that] manages to flatten two protagonists that had far more depth in the novel ... Lenser Lisa Rinzler gives the film a somber, elegant look, and Peter Nashel's score adds a layer of intensity. But it takes more than a few brooding strings to make a film taut and tense. The pace drags increasingly, trudging through the protracted final reels to a clumsy wrap-up with too many concluding scenes, none of them effective." [cite web|url=http://www.variety.com/index.asp?layout=features2006&content=jump&jump=review&head=sundance&nav=RSundance&articleid=VE1117929305&cs=1&p=0|title="Variety", January 22, 2006]