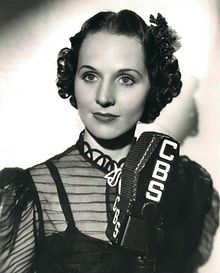 She was born in Compton, California as Evelyn Nadine Henderson, and was the descendent of some of the earliest non-Hispanic settlers in California.

Diagnosed as a teenager with pulmonary disease, her doctor suggested she try studying classical singing to strengthen her lungs, as was customary at the time. Following his instructions, she began studying privately with Hollywood-based tenor, Amado Fernandez, during high school. In a fluke of fate, a great voice and singing talent emerged. Her natural potential revealed, she went on to study more seriously with Horatio Cogswell, and later in New York City with Florence Easton.

She took her stage surname from her first husband, whom she divorced after two years of marriage. She would later marry a general medical practitioner, Dr. Heacock, and Nadine Heacock was the name she used in her private life. She appeared on The Voice of Firestone, on radio with stars such as Bing Crosby and Nelson Eddy, and did a musical tour with Gordon MacRae.

But by the end of 1939, she was embarking on a career in classical opera. She made her professional debut in 1940 as Marguerite in Vladimir Rosing's Los Angeles production of Gounod's Faust. She sang with the Los Angeles Opera from 1939 to 1941. In 1941, she began her career at the Metropolitan Opera, making her debut as Pamina in The Magic Flute (sung in English).

She made numerous guest appearance in European opera houses, starting in 1953 and was also heard in a wide range of concert repertoire. She made a notable recording of the Brahms Ein deutsches Requiem with conductor Bruno Walter.

She became an acclaimed performer, excelling not only in Mozart, but gathering acclaim for her interpretation of Mimi in La Boheme, and an especially thrilling Violetta in La Traviata. She was comfortable in both lyric and coloratura roles. In all, she performed 249 times at the Met, retiring in 1960. She recorded with CBS, Cetra, Melodram, Discocorp, and Camden.

While studying music at the University of Southern California in Los Angeles, she was briefly married to a classmate, whose name she kept for the stage.

She was married again, in 1939, to Dr Laurance Heacock, a surgeon, with whom she returned to Southern California in 1970. They had two children, a daughter, Sue Lynn, and a son, Loren. They later settled in Cypress, California, where she taught singing.

In her personal life following her musical career, she was a staunch Republican, and took pride in the fact that, when meeting actor Ronald Reagan socially, she urged him to run for public office.[citation needed]

She died in Los Angeles on March 1, 2003. Her New York Times obituary gave her year of birth as 1907[1] and her age at death as 96, as did other sources, most notably, Variety. Some sources have incorrectly cited 1913 or 1914 as her year of birth. Widowed since 1987, Nadine Conner was survived by her two children, four grandchildren, and three great-grandchildren.