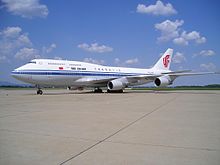 In 1929, it was established as China Airways by Curtiss-Wright, under the leadership of U.S. airline magnate Clement Melville Keys. In 1933, after a series of disastrous accidents and disagreements with Chinese leader Chiang Kai-shek, Keys sold the company to Pan American Airways, under the control of Keys' arch-rival Juan Trippe. Pan Am placed the company under the control of banker and aviator Harold Bixby. When the Japanese invasion of China in 1937 overran all of China's maritime access, its Chinese Air Company was merged with China Airways into the China National Aviation Company (CNAC), with Pan Am owning 45% of the operation and the government the remaining 55%.

Before World War II, in the interregnum between 1937 and December 1941, CNAC flew many internal routes with Douglas Dolphin amphibians (Route #3, from Shanghai – Canton, via Wenchow, Foo-chow, Amoy & Swatow), and Douglas DC-2s and DC-3s. In addition, three examples of the Vultee V-1A single-engine transport that "missed the boat" to Republican Spain ended up in China. Initially, the Nationalists maintained contact with the outside world through the port of Hanoi in French Indo-China, but the Japanese put pressure on the new pro-Vichy regime there to cut off relations with them in 1940-41.

During World War II, CNAC flew supplies from Assam, India, into Yunnan, southwestern China through the Hump Route, after the Japanese blocked the Burma Road. Despite the large casualties inflicted by the Japanese and more significantly, the ever-changing weather over the Himalayas, the logistics flights ran around the clock, from April 1942, until the end of the war.

The downfall of CNAC's operations came on 9 November 1949, when managing director Colonel C. Y. Liu, general manager of CATC (Central Aviation Transport Corporation), Colonel C. L. Chen and some of the staff declared their wish to be Communist. On the day, 12 aircraft from CNAC and CATC were flown, without acknowledgment, from Hong Kong Kai Tak Airport to Communist controlled China. One aircraft arrived in Beijing, while the other 11 arrived at Tianjin. More remaining staff also moved to Mainland China, at a later date. Remaining aircraft in Hong Kong had transferred to the Civil Air Transport Inc., managed by the Nationalists, in an effort to save the aircraft from the Communists.

CNAC ceased operations in mainland China, following the Communist revolution of 1949, when the Civil Aviation Administration of China took over to become the sole airline of China. However, CNAC remains a subsidiary of CAAC and incorporated in Hong Kong.

In the 1980s, CNAC acted as the overseas ticket agency of CAAC. CNAC launched its own airline, CNAC Zhejiang, in Hangzhou, with Bombardier Dash 8 aircraft and later, Airbus A320 and A319 aircraft, with the same logo painted on the aircraft's tails as in 1929. It had some 3 Boeing 737-300 in service. CNAC merged into Air China, along with China Southwest Airlines, in 2004, when the CAAC decided to consolidate the nine major state-owned airlines into three groups. The new Air China is in turned owned by the China National Aviation Holdings Company (CNAH) and is listed on the Hong Kong Stock Exchange (code 1110).

CNAC is currently in talks with China Eastern Airlines, to purchase up to 30% of the latter airline.[2]

As of April 2011, the China National Aviation Corporation subsidiaries fleet consists of the following aircraft.