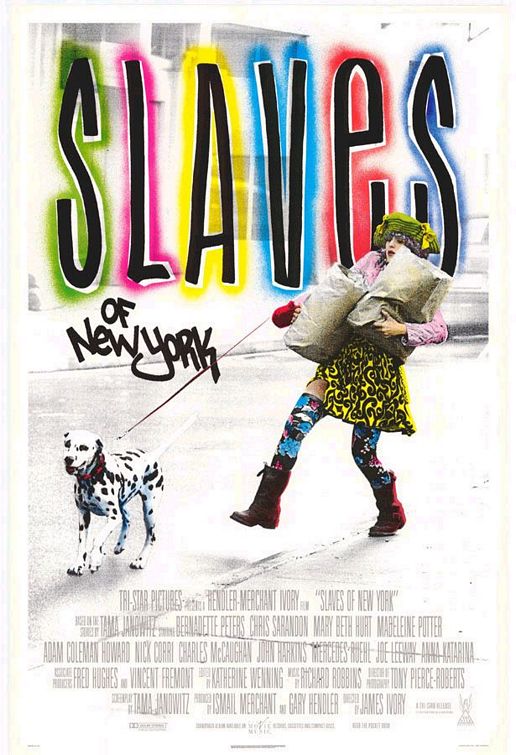 Based on the stories "Slaves of New York" by , the film follows the lives of struggling s in during the mid-1980s.

The story follows Eleanor, an aspiring hat designer, and a group of artists and models in the "downtown" New York City art world. Eleanor lives with her younger boyfriend Stash, an unknown artist, who is unfaithful and treats Eleanor with careless indifference. Eleanor expresses her feelings for Stash when she tells him that she was once attracted to him because he was dangerous. She stays with him despite the crumbling relationship because she has no where else to live—she is, in effect, a "slave."

When a clothing designer, Wilfredo (), discovers her hat designs and offers to use them in a fashion show, Eleanor gains the self-respect—and money—to leave Stash. There is an elaborate fashion show sequence.

While buying food for a celebratory party, she meets Jan and invites him to the party. After the party, Eleanor and her new friend talk, and then ride off into the morning sunrise.

Tama Janowitz had written a script for , based on the Eleanor and Stash stories in her 1986 collection of short stories, "Slaves of New York". When Warhol died, Merchant-Ivory bought that script.

In discussing casting the role of "Eleanor", James Ivory commented: "...but out of 100 girls, there was not a single one with Miss Peters's originality. We wanted someone unusual and different but also ingenuous and not too knowing." ("New York Times", Erica Abeel, March 12, 1989.)

"Slaves of New York" was shot on location in the of New York City, starting on April 4, 1988, with a 10-week shooting schedule. There was a "modest" budget—$5 million—that meant there were no lengthy rehearsals. There was one read-through before shooting began. ("New York Times", April 5, 1988)

"Slaves of New York" received mostly unfavorable reviews at the time of its release. wrote that the film "...simply drifts from situation to situation" and is "never terribly involving" ("New York Times", March 17, 1989). , who gave the movie a half-star rating, opened his review with the statement "I detest "Slaves of New York" so much that I distrust my own opinion." [http://rogerebert.suntimes.com/apps/pbcs.dll/article?AID=/19890324/REVIEWS/903240302/1023]

Domestic gross was $463,972 according to boxofficemojo.

"Slaves of New York" became a amongst the gay communities in the United States. It is notorious for a scene that features a very convincing drag act performing "" by while making their way down a street in full regalia.

* This was Bernadette Peters' second role as a hat designer, having played one in the 1985 "".

* There are several cameos in this film: for example, Producer , lyricist and Adam Green, son of her writing partner, Adolph Green, and Tony-Award winning actress Tammy Grimes appear in party scenes.