The A55, also known as the North Wales Expressway, is a major road in Britain. Its entire length is a dual carriageway primary route, with the exception of the point where it crosses the Britannia Bridge over the Menai Strait. All junctions are grade separated except for two roundabouts — one east of Penmaenmawr and one in Llanfairfechan. The road originally ran from Chester to Bangor but was extended parallel to the A5 across Anglesey right into Holyhead Docks in 2001. The road improvements have been part funded with European money, under the Trans-European Networks programme, as the route is designated part of Euroroute E22 (Holyhead - Leeds - Amsterdam - Hamburg - Malmoe - Riga - Moscow - Perm - Ekaterinburg - Ishim).

The A55 runs west from its junction with the M53 motorway near Chester, where it is known as the Chester Southerly Bypass, crossing the River Dee and the Welsh border before passing close to Broughton then passing north of Buckley and Northop. There is a major climb westbound between Broughton and Buckley (Junctions 35a to 35) though with no crawler lane. There is a difficult junction with the A494 at Junction 34/33b and the road briefly has a three lane section as traffic joins from Queensferry and leaves towards Mold. In the eastbound direction there is also a short three lane section for the same reason. In the eastbound direction there is also a 270 degree speed limited single lane curve to climb up and over the A55/A494. There were plans that might have affected this often congested junction as part of the A494 Queensferry to Ewloe improvement but the Welsh Assembly Government rejected these on 26 March 2008 as being of too large a scale.[1] However, a scheme for improving the A55/A494 Junction is planned to go ahead and includes widening the dual carriageway to three lanes between Ewloe roundabout and Junction 33 (Northop). Junction 33A at Northop Hall and Junction 33B with the A494 for Mold would be closed and a new junction for all traffic flows will be constructed near the Northop Hall service station for the A494 traffic. This proposal will remove all weaving traffic at the A55 junction with the A494 and remove the infamous 270 degree trumpet junction. Work might start by April 2010.[2][dated info] 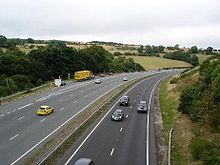 From Ewloe, the road is relatively flat until after Northop when it climbs up onto the flanks of Halkyn Mountain range, passing to the southwest of Holywell with major climbs between Northop and Halkyn (Junctions 33 and 32b) and Halkyn and Holywell Summit (Junctions 32 and 31). This section of road is notorious for poor weather conditions including fog, ice and snow in winter months. In fine weather, however there are extensive views over the River Dee estuary to the Wirral Peninsula, Liverpool and beyond. The highest part of the road is in the vicinity of Brynford at around 790 feet (240 m). The steep descent towards St Asaph is down the new Rhuallt Hill (Junctions 29 to 28), which also provides the first views of the mountains of Snowdonia in the far distance. There is a crawler lane on Rhuallt Hill for eastbound traffic. The road bypasses St Asaph to the north, and runs past Bodelwyddan and Abergele to reach the North Wales coast at Pensarn (Junction 23A). From here onwards to Bangor, the route is close to the North Wales Coast railway.

Part of the route (Junction 23) Llanddulas to (Junction 17) Conwy is signed as a 70 mph (110 km/h) speed limit (as opposed to most of the other sections of the A55, which are the National Speed Limit) and is a non-motorway special road, which has restrictions on access by pedestrian and other traffic, similar to the restrictions applied to a motorway. There is also a stretch passing through Colwyn Bay (Old Colwyn to Mochdre) signed as a 50 mph (80 km/h) limit. These restrictions are imposed as added safety precautions because the slip-roads in this stretch are unusually short because of the difficulty of fitting the road into a very narrow area of land, and, due to the road underpassing much of the town, to reduce road surface noise levels. The section from west of Colwyn Bay railway station to the Station Road overbridge at Mochdre was constructed on the trackbed of the North Wales Coast railway. The former 4 track railway was reduced to the two more northerly tracks to make space for the road. 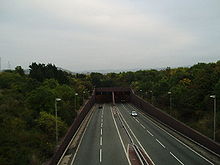 Approaching the tunnel from the west.

The crossing of the estuary of the River Conwy is by means of an immersed tube tunnel, the first of its kind constructed in the United Kingdom.[3]

The decision to construct an immersed tube tunnel bypass followed an extensive public consultation, named the Collcon Feasibility Study. This ruled out another bridge by the castle on aesthetic grounds, since it would have damaged the view of the world heritage site Conwy Castle, and the two bridges by Robert Stephenson and Thomas Telford. Another alternative bridge crossing was proposed at Deganwy, but this too was ruled out for aesthetic reasons. An inland alternative with heavy grades which would have passed over Bwlch y Ddeufaen pass at 430 metres (1,410 ft), following the old Roman road, was also worked up but rejected for cost and utility reasons.

The tunnel was constructed by a Costain/Tarmac Construction joint venture,[4] as pre-formed concrete sections, and then floated into position over a pre-prepared trench in the bed of the estuary. The 3million tonnes of silt and mud extracted to create the trench in which the tunnel sections sat, were vacuumed to one side of the construction site, as to let them drift down river would have harmed the large mussel fishing beds downstream. The silt was deposited upstream of the bridge at Conwy which created a large new area of low lying land which was subsequently given to the RSPB for a wildlife preserve. The casting basin for the tunnel sections was later converted into a new marina in the lower estuary. Because of the valuable fishery in the river and also because of the history of heavy metal mining in the catchment of the river, extensive ecological assessments were made both prior to the construction of the tunnel and subsequently. These studies finally concluded that no significant environmental damage had been caused.

After five years of construction, the tunnel was opened in October 1991. It initially had an advisory 50 miles per hour (80 km/h) speed limit, but this was dropped in 2007 as accidents were rare in the tunnels.

An easterly view of the A55 at Penmaenmawr with the North Wales Coast Railway on the seaward side. The Penmaenbach Tunnels are in the distance

The construction of the coastal section of the road involved major civil engineering works, with hard rock tunnels passing through the cliffs in two places. In the westbound direction both the Penmaenbach and the Pen-y-clip tunnels (east and west of Penmaenmawr respectively) were initially subject to advisory 50mph speed limits but these were lifted in 2007 as there had been few accidents. In the Eastbound direction, the road still uses the 1930s cliffhugging route at both locations. The eastbound carriageway at Penmaenbach is subject to a 30 mph (50 km/h) speed limit due to sharp curves and double white lines nominally preclude lane changing. Plans to rectify the awkward alignment by building another tunnel parallel to the current westbound tunnel (as originally intended when the westbound tunnel was proposed) have been discussed for several years. The original Telford road around the cliffs is now a cycleway at both locations although at Pen-y-Clip it cannot be used in an easterly direction without cycling the wrong way along the westbound carriageway. Recent work (late 2007) at Penmaenbach eastbound has seen the erection of gantries to close lanes when bidirectional working is in place.

Some sections of the rest of the route are of lower standard than that of those further east. Some traffic leaves for major holiday destinations such as Caernarfon or the Llŷn Peninsula, though much continues on to the port of Holyhead. As such part of the route is not classed as clearway and has two at grade junctions (roundabouts), Penmaenmawr (Junction 16) and Llanfairfechan (Junction 15). The Bangor bypass, in which the road previously terminated and became the A5 regains high standards and is such through the Anglesey section, bar the Britannia Bridge, which is a single carriageway deck above the North Wales Coast railway over the Menai Strait. In 2007 the Welsh Assembly Government undertook a consultation to determine which of four options would be preferred for a second crossing. This section intersects with the A487 towards Caernarfon, and the west coast of North Wales. 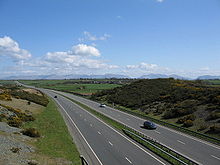 Looking east along the road in Anglesey with the mountains of Snowdonia in the background.

The final section of the A55 to be constructed was the Anglesey section. This 20 mile (32 km) section from the end of the Llanfairpwll bypass to Holyhead Harbour was constructed as Private Finance Initiative scheme where the builders, a Carillion / John Laing joint venture, earn a shadow toll based on usage and lane availability. They also have to maintain the road for the extended period of their shadow toll agreement. When travelling eastbound along this section there are fine views of Snowdonia. The approach to Holyhead required major work with a new section over the sea paralleling the Stanley Embankment that carries the original A5 and the North Wales Coast railway.

The Welsh Assembly Government (WAG) published its National Transport Plan in July 2009. [5] This includes mention of improvements to the A55 including the possible removal of the two roundabouts at Penmaenmawr and Llanfairfechan.

The A55 partly follows the alignment of the Roman road from Chester (Deva) to Caernarfon (Segontium), particularly from Junction 31 to 30 and Junction 13 to 12. Between Chester and Holywell the alignment of this road is uncertain and between St. Asaph and Abergele, the Roman road followed an inland route avoiding the difficulties of the crossing of the Conwy estuary and the cliffs at Penmaenbach and Pen-y-Clip.

A55 opening dates of major improvements