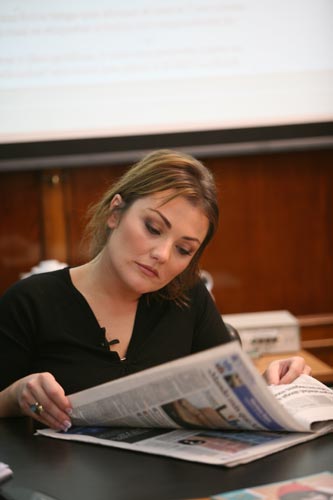 Amaia Montero Saldías (born , in , ) is a Spanish singer.

From her work as a singer, likes all fields. Both compose and record as the concerts have features that would not change. For about six years is a teacher of singing, Almudena, who teaches breathing techniques and placing the voice and although you can not attend classes regularly due to lack of time it was noticed the benefits of what he teaches Almudena. At first Amaia had nodules in the throat but after the tour to tell the sun was removed.

In recent years, her life has taken a big turn. She has gone from being a normal girl to a singer known by everyone and she is still surprised with each new aspect of her life. But in the end remains a sociable, fun and very accessible. It has a sweet nature and always brings emotion in her songs and a smile for everyone. She's also known for her duets with famous singers, such as:

In 2007, the band said that they would be on hiatus so that Amaia could release her solo album. On November 19th, 2007, Amaia announced her departure from the group and the start of her solo career.

="Amaia Montero" (2008)= The first album, the Spanish singer Amaia Montero, after their successful separation of the group "The Ear of Van Gogh", which devotes one of the items, the sale will come next November 18, informed the house label Sony BMG in Madrid.

The disc, entitled the name of the artist, contains 11 songs composed by the singer. The first single will be promoted is called "Quiero Ser".