The Birds and the Bees (film)

The Birds and the Bees (film)

Infobox Film
name = The Birds and the Bees 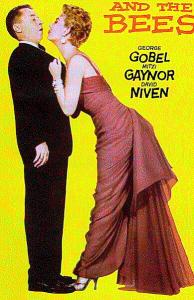 George "Hotsy" Hamilton (), a very eligible but naive vegetarian heir to a meat-packing fortune, returns home to Connecticut by luxury cruise ship, accompanied by Marty Kennedy (), his valet, guardian and best friend, after spending three years together on a scientific expedition in the Belgian Congo looking for a rare snake. Onboard, the woman-shy George attracts a lot of attention from the opposite sex, despite being the consummate milque-toast, but the one he can't avoid is Jean Harris (), a beautiful con artist travelling with her equally larcenous father, Colonel Patrick Henry "Handsome Harry" Harris (), and his partner-in-crime Gerald ().

The three con artists are out to fleece George of a small fortune, but even the best laid plans can go astray. First, Jean falls hard for George and shields him from her card sharp father. Then, when Marty discovers the truth about her and her father and tells George about them, he dumps her. Furious at being scorned, she re-enters his life masquerading as the posh "Countess Louise", the cousin of "Jacques Duc de Montaigne" (), who is actually Frenchie, another con man who's swindling the rich folks of Connecticut. Jean is determined to get back at George, so she sets out to seduce him, again.

George's domineering father () throws a party in honor of the visiting French royalty, and George is completely taken in by Jean's masquerade. Soon her hapless victim is so confused and bothered he doesn't know which way is up, but, in the end, after all the twists and turns, deceptions and lies, true love wins out. [TCM [http://www.tcm.com/tcmdb/title.jsp?stid=68801&category=Full%20Synopsis Full synopsis] ]

Cast notes:
*"The Birds and the Bees" was one of only two feature films that George Gobel starred in; the other was "" in fy|1958.

Two other songs were written for the film but not used:

At the time "The Birds and the Bees" went into production, "Lonesome" George Gobel had the highest rated television show on , which had been running since 1954, but he had not yet appeared in a film. This remake of "", the plot of which it follows closely, was designed as a vehicle for Gobel, and had the working titles "The George Gobel Comedy", "The Gobel Story" and "The Lady Eve". Paul Jones was the producer for both this version of the story and the original.

The film was in production from mid July to fy|1955, and opened with a series of invitational premieres in thirty-two key cities across the United States on fy|1956, followed by a premiere on and a general release in May. [ TCM [http://www.tcm.com/tcmdb/title.jsp?stid=68801&category=Overview Overview] ] [IMDB [http://www.imdb.com/title/tt0049011/releaseinfo Release dates] ]