Prince Cem (Ottoman Turkish: جم, also spelt Gem, Djem, Цём, Jem; nicknamed Jem, Jem Zizim), December 22, 1459 – February 25, 1495) was a pretender to the Ottoman throne in the 15th century. He was a son of Mehmed II the Conqueror and younger brother of Sultan Bayezid II. He was banished to Europe, first under the protection of the Knights Hospitaller of St. John on the island of Rhodes and ultimately that of the Pope himself.

At the death of Mehmed the Conqueror, Bayezid was the governor of Sivas, Tokat and Amasya, and Cem ruled the provinces of Karaman and Konya.

Contrary to Islamic law, which prohibits any unnecessary delay in burial, Mehmed II's body was transported to Constantinople, where it lay neglected; three days passed prior to perfumed candles being placed with the corpse so as to mitigate its stench. The grand vizier Karamanlı Mehmet Pasha – believing himself to be fulfilling the wishes of the recently deceased Sultan – attempted to arrange a situation whereby the younger son Cem, whose governing seat at Konya was closer than his brother Bayezid's seat at Amasya, would arrive in Constantinople prior to his older sibling and be able to claim the throne. In spite of Karamanli Mehmet's attempts at secrecy, the Sultan's death and the grand vizier's plan were discovered by the Janissaries, who had been forbidden to enter the capital. As a result of Karamanli Mehmet's scheming, the Janissary corps (who supported Cem over Bayezid), entered the capital and murdered the vizier. Prompted by the arrival of their ruler's corpse in the capital and the murder of vizier Karamanli Mehmet, there was widespread rioting. Understanding the danger of the situation, former grand vizier Ishak Pasha took the initiative of beseeching Bayezid to arrive with all due haste. In the meantime, Ishak Pasha took the cautionary measure of proclaiming the latter's 11-year-old son, Prince Korkud-Korkut, as regent until the arrival of his father.[1]

Prince Bayezid arrived at Constantinople on May 21 and was declared Sultan. Only six days later, Cem captured the city of Inegöl with an army of 4,000. Sultan Bayezid sent his army under the command of vizier Ayas Pasha to kill his brother. On May 28, Cem had defeated Bayezid's army and declared himself Sultan of Anatolia, establishing his capital at Bursa. He proposed dividing the empire between them, leaving Bayezid only Europe. Bayezid furiously rejected the proposal. Declaring "between rulers there is no kinship," he marched on Bursa. The decisive battle between the two rivals to the Ottoman throne took place near the town of Yenişehir. Cem lost and fled with his family to Mamluk Cairo.

In Cairo, Cem received a letter from his brother, offering Cem one million akçes (the Ottoman currency) to stop competing for the throne. Cem rejected the offer, and in the following year he launched a campaign in Anatolia. On May 27, 1482, he besieged Konya but was soon forced to withdraw to Ankara. He intended to give it all up and return to Cairo but all of the roads to Egypt were under Bayezid's control. 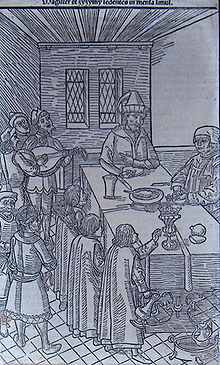 Prince Cem (middle) and Pierre d'Aubusson at a dinner in Rhodes

Cem and a few followers asked protection of the Spanish captain of Bodrum Castle. Pierre d'Aubusson, grand master of the Knights of St. John, then invited Cem to Rhodes. On June 29, Cem went there as a guest and was received with honour. In return for the overthrow of the new sultan Bayezid, Prince Cem offered perpetual peace between the Ottoman Empire and Christendom. However, the sultan paid the Knights a large amount to keep Cem captive. The Knights took the money and betrayed Cem, who thereafter became a well-treated prisoner. Afterwards, Cem was sent to the castle of Pierre d'Aubusson in France. Sultan Bayezid sent a messenger to France and requested Cem to be kept there; he agreed to make an annual payment in gold for his brother's expenses.

Cem was transferred in March 1489 to the custody of Pope Innocent VIII, who unsuccessfully attempted to use Cem to begin a new crusade.[2] The Pope also tried to convert Cem to Christianity, without success. Cem's presence in Rome was useful nevertheless, because whenever Bayezid intended to launch a military campaign against Christian nations of the Balkans, the Pope would threaten to release the pretender. In exchange for maintaining the custody of Cem, Bayezid paid Innocent VIII 120,000 crowns (at the time, equal to all other annual sources of papal revenue combined), a relic of the Holy Lance (which allegedly had pierced the side of Christ), one-hundred Moorish slaves, and an annual fee of 45,000 ducats.[3]

Cem died in Capua on February 25, 1495, while on a military expedition to conquer Naples under the command of King Charles VIII of France. Sultan Bayezid declared national mourning for three days. He also requested to have Cem's body for a Muslim funeral, but it was not until four years after Cem's death that his body was finally brought to the Ottoman lands. He was buried in Bursa.

In the 1490s, a book in Latin was written about Cem's life. It was illustrated by Guillaume Caoursin, vice-chancellor of the Knights Hospitaller. It was published in several European countries that possessed printing capability: Venice, Paris, Bruges, Salamanca, Ulm and London. The many illustrations in the book are the first accurately described representations in Western Europe of costumes and weapons of the Turkish people.

Cem's life also served as inspiration for a character in the book The Damned Yard (1954) by Ivo Andrić.

Bulgarian historian Vera Mutafchieva, inspired by Cem Sultan's importance in European politics of the 15th century, wrote a novel (The Cem case) about him.